At the turn of the year, APS News staff looked back at the news about physics and physicists that made headlines in 2011. These top eleven selections for 2011 are not necessarily the stories that will prove the most significant or long-lasting, but they are a fair sample of what the media reported, and the public digested, over the previous twelve months.

Closing in on Habitable Planets
Astronomers using the Kepler telescope are homing in on discovering a true Earth-like, potentially habitable planet outside our solar system. In January, news broke that it had discovered its first rocky planet, one just 1.4 times the size of Earth, but twenty times closer to its star than Mercury is to the Sun. In February, the team said that out of Kepler’s more than 2,300 planet candidates, it found 54 signals that indicated a planets orbiting their parent stars in the zone where liquid water can exist. The first habitable zone planet was confirmed in December with the announcement of a planet 2.4 times the radius of Earth orbiting a star 600 light-years away. Just a few days later, NASA revealed its discovery of the smallest rocky planets yet, the smallest being 87 percent the size of Earth, orbiting a star 1,000 light years away.

The Japanese Tsunami and Fukushima 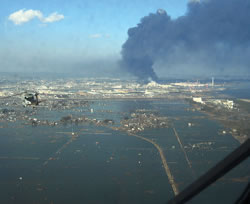 Helicopter view of Sendai, Japan after 2011 tsunami which shows damage in the Tōhoku region with black smoke coming from the Nippon Oil Sendai oil refinery

The magnitude 9.0 Japanese earthquake and subsequent tsunami and nuclear meltdown were terrible tragedies of an almost incomprehensible scale. The coinciding disasters prompted a mass of news coverage that intimately tied together science and public safety. As the catastrophe at the Fukushima Daiichi power plant continued to unfold over weeks, then months, news about the dangers of radiation exposure, containment and cleanup grabbed headlines around the world. Even months later, as scientists continued to sift through data from the disaster, new insights into what happened have been gleaned. In December, researchers from NASA and Ohio State University announced that the resulting tsunami was so devastating in part because two tsunami waves merged offshore to form a single massive ocean surge.

Quantum Computing
Researchers working towards building a workable quantum computer hit a major milestone in 2011. In March, a team at University of California Santa Barbara announced that it had built a chip that holds four qubits capable of doing basic calculations. In September, the same team announced that it had improved upon the design and built a chip that incorporates Von Neumann architecture similar to that found in home computers. The design utilizes a tiny central processing unit hooked up to rudimentary memory that holds programming instructions and data. The chips are about as elementary as computing can get, and there remains a lot of work ahead, but it is a major early step on the road from quantum qubits to viable processors.

Higgs boson
The hunt for the Higgs boson captured headlines throughout the year. Every few months scientists seemed closer than ever to pinning down proof of the elusive particle, only to have it dodge discovery again and again. The first wave of news came in the beginning of April when the CDF collaboration at the Tevatron at Fermilab made headlines with the announcement of an unusual “bump” in their data that could indicate a new particle. Ultimately the bump turned out to be a statistical fluke that disappeared with more data. Hot on its the heels came a leaked memo seemingly indicating that an announcement was imminent from the ATLAS detector at the LHC that the boson was spotted with a mass around 115 GeV. An official denial from CERN put that rumor to rest. The airwaves went quiet for a few months, until mid-December when an announcement through a public seminar revealed that physicists at ATLAS and CMS both saw enhancements in their data at around 125 GeV, but not nearly at the levels of significance needed to be declared a discovery. Thus, the search continues.

Heaviest Antimatter
Researchers at the Relativistic Heavy Ion Collider at Brookhaven National Laboratory announced in April that they had synthesized the heaviest antimatter ever produced, a handful of antihelium-4 nuclei. They produced the anti-alpha particles by smashing gold atoms together nearly a billion times, producing the signature of antihelium a total of eighteen times. The scientists at the STAR collaboration, responsible for the creation of the antihelium, say that this will likely stand as the record for the heaviest antimatter for the foreseeable future, as the production of heavier, stable nuclei are far rarer and beyond the capacity of any current accelerator technology.

Living Laser
Scientists at the Harvard Medical School and Massachusetts General Hospital in Boston created the first living organism that can generate laser light. To generate the beam, the team first engineered a human kidney cell to produce green fluorescent protein as a gain medium, the same protein that makes jellyfish glow and that is often used in labs to label cells. The team then shone a blue light on a single cell placed between two mirrors, and found it emitted a weak green glow, but still an order of magnitude brighter than natural jellyfish fluorescence.

“Seeing” a Wave Function
Wave functions of quantum particles represent probability amplitudes in an abstract space, so directly detecting one is tricky, to say the least. However in June, physicists at the National Research Council of Canada in Ottawa devised a way to eke out just enough information about the wave functions of polarized photons to map out their wave function, without violating the Heisenberg uncertainty principle. By repeatedly weakly measuring the carefully angled path of identical photons, the team was able to glean a little bit of information about each one’s position or speed without collapsing its wave function. The averaged results then painted a complete picture of the photon’s wave function, a technique the team thinks can be scaled up to larger quantum particles including electrons, ions and even molecules.

Faster than Light Neutrinos
There may only be two things that travel faster than light, muon neutrinos from CERN’s Super Proton Synchrotron, and the news about them. Within minutes of the announcement that the OPERA experiment in Grand Sasso, Italy had detected evidence of neutrinos breaking the ultimate speed limit, word spread around the world of this seemingly impossible result. Physicists mostly greeted the news with skepticism, as the results seemed to fly in the face of the tenets of special relativity. A veritable cottage industry sprang up finding theoretical holes in the results, but OPERA reran the experiment with shorter neutrino pulses, and found the same results. Fermilab is set to run its own experiments to test whether it can reproduce the results; if not, the answer may lie buried in some as yet unknown systematic error in OPERA’s setup.

Tevatron Shutdown
After 28 years and countless trillions of particle collisions, the Tevatron smashed its last atoms on September 30th. Just past 2:30 pm, following a brief ceremony, renowned physicist Helen Edwards, who helped design the great accelerator, pushed two specially constructed buttons, shutting down the power to the machine forever. Capable of colliding particles up to energies of a trillion electron volts, the 4-mile-round particle accelerator was for years the most powerful in the world, until the Large Hadron Collider came online in 2008. With the Tevatron’s capabilities eclipsed by the new European machine, the Department of Energy opted to redirect Fermilab’s focus from the energy frontier to the intensity frontier. Researchers at Fermilab still have about a year’s worth of data to sift through from the last runs of the Tevatron and they are also moving on to help CERN crunch data from the LHC.

Nobel Prizes
The Nobel Prizes always make a big splash in the press, and this year was no exception. Saul Perlmutter of Lawrence Berkeley National Lab, Adam Riess of The Johns Hopkins University and Brian Schmidt of the Australian National University shared the physics prize for discovering the accelerating expansion of the universe. By studying the red-shifts of distant supernova, the two teams made the shocking finding that not only is the universe expanding, a fact that's been known since the 1920s, but it's speeding up as it goes. This revelation shook cosmology at its core, and later computations found that it could mean that three-quarters of the universe is likely made up of some as yet unidentified "dark energy."

In addition, the prize for chemistry was awarded to Dan Shechtman of the Technion–Israel Institute of Techonology for his discovery of quasicrystals, research first published in PRL in 1984. Shechtman’s work turned crystallography on its head, and completely revolutionized the way scientists thought about how the structures of crystals could form. So controversial were his findings, it took a long time for the scientific establishment to come around and accept his results. Initially, after he announced he’d found crystals that didn’t form repeating identical patterns, his bosses at NIST asked him to leave the lab where he was employed. Now he has a Nobel Prize validating his work.

Biggest Black Hole
A newly discovered interstellar behemoth shattered the record of biggest black hole in the known universe. In December, astronomers from the University of California, Berkeley announced that the black hole at the center of the galaxy NGC 4889, 336 million light-years away, tips the scales at almost 21 billion solar masses, and is ten times the size of our solar system. The previous record holder weighed in at a mere 6.3 billion solar masses. At the same time, the research team announced the discovery of another black hole, this one 9.7 billion times the size of the Sun in the Virgo cluster. The two black holes were discovered after analyzing data from the Hubble Space Telescope, and the Gemini North and Keck telescopes. Astronomers hope that a better understanding of these black holes will yield insight into how galaxies formed in the early universe.