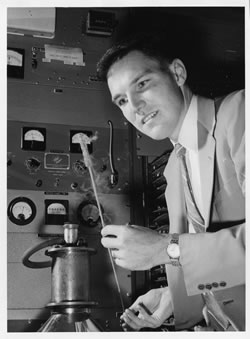 It is difficult to imagine today, but computers used to be built with bulky vacuum tubes and often filled entire rooms. One of the lesser-known devices invented to help scale them down to size was the cryotron, invented by an MIT graduate student named Dudley Allen Buck. The cryotron was the first practical application of superconductivity, the ability of certain metals to conduct electrical current with no resistance at very low temperatures.

Scientists began experimenting with materials at low temperatures, and the impact on electrical properties, in the 19th century, achieving both liquid and solid states of gases. In 1911, a Dutch physicist named Heike Kamerlingh Onnes successfully used liquid helium to cool solid mercury down to 4.19 K, at which point, he noted, the material’s electrical resistivity abruptly disappeared. This was the first observation of superconductivity.

By the mid-1950s, in the wake of the invention of the transistor, researchers were looking for ways to integrate thousands of transistors on a single circuit, thereby creating computers that would be thousands of times faster and much smaller than the old vacuum tube technology previously in use. One of the challenges was heat: packing all those components so close together led to increased electrical resistance. Superconductors were eyed as promising candidates because they could conduct with no resistance. And one of those researchers eying such materials was Dudley Allen Buck.

Born in San Francisco in 1927, Buck grew up in Santa Barbara and developed a passion for amateur radio, earning a commercial radio operator license at just 16. He worked part-time at a local radio station before heading off to the University of Washington to study electrical engineering, radio, and radar theory. After graduating in 1948, he served two years in the US Navy, working on classified cryptography research in Washington DC, in a building that housed 121 “bombe” computers used to break Japanese and German ciphers during World War II. He was even sent on a top-secret mission to Berlin that remains classified to this day.

After his return from Berlin, Buck began his graduate studies at the Massachusetts Institute of Technology. His first assignment, working with Ken Olsen, was to develop ferrite materials for a magnetic core memory in a prototype computer called the Whirlwind. This became the basis of his master’s thesis, demonstrating that ferroelectric materials could be used for digital data storage and switching–the earliest demonstration of ferroelectric memory (FeRAM). He also showed that these materials made excellent voltage controlled switches. He earned his MS in 1952.

Buck’s other work included a new method of nondestructive sensing of magnetic materials. One challenge with magnetic core memory was that as one read the data, the memory would be erased and had to be re-written back into magnetic storage–a time-consuming process. Buck’s nondestructive method eliminated that extra step, since the data could be read without erasing the memory. He also invented content addressable memory, a means of storing and retrieving data with no need to know the precise location of that data, which also reduced processing time.

On top of all this other research, Buck was intrigued by the possibility of making computer circuits that didn’t require vacuum tubes or a transistor, which had only recently been invented. He realized he could make a logic circuit using just wire, diodes and magnetic cores, like those used in early cryptographic communication systems. Furthermore, if he could exploit the ability of magnetic fields to disrupt superconductivity–usually seen as a drawback–it would be possible to make a switch for use on integrated computer chips.

Buck sketched out his concept for a cryotron in his research notebook in December 1953, and began building practical devices within two years, using two superconducting wires made out of niobium and tantalum, respectively, each with a different critical temperature. He wrapped the higher Tc niobium wire around the lower-Tc tantalum wire , and made sure they were electrically isolated from each other.

The breakthrough generated a great deal of excitement for the prospect of miniaturization of computer components, despite the need for liquid helium to maintain the superconducting state. Life Magazine featured a full-page photograph of Buck and his cryotron in one hand, and the outdated vacuum tube in the other, in 1957, and the Institute of Radio Engineers gave him their award for engineers under the age of 30 that same year.

The smaller he could make the cryotron systems, the greater the processing speeds that could be attained, so Buck’s research in the late 1950s focused on ways to shrink the components further. With his colleague, Kenneth Shoulders, he started making thin-film cryotron integrated circuits (using lead and tin thin films) in the laboratory, incorporating insulating oxide layers. He also improved the mechanical strength of the system through the development of electron beam lithography techniques that reduced the need for chemicals when etching what he called “microminiature printed systems.”

Other researchers built on his research over the ensuing years, leading to the invention of a cryotron catalog memory system in 1956, IBM’s Crowe Cell, patented by James W. Crowe in 1957, the Josephson junction, and the first superconducting quantum interference device (SQUID). Today neuroscientists are able to map brain activity using magnetoencephalography (MEG) because of these groundbreaking developments, as well as applications in maglev trains, high-efficiency wind turbines, and particle physics accelerators.

Buck’s scientific star was very much on the rise, which makes his sudden death from a “mysterious illness” in May 1959, at the age of 32, all the more tragic. He had received his PhD only the year before. “Dudley was not ambitious in the meaning that word is usually used,” his MIT classmate, Charles Crawford, recalled after Buck’s passing. “Dudley was not ambitious for himself; he was ambitious for the human race.”