Community Weighs Pros and Cons of Physics by Press Conference 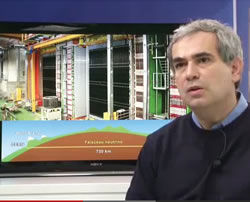 Dario Autiero of the OPERA collaboration explains how they measured faster-than-light neutrinos.

Particle physics made headlines around the world in September with the announcement that researchers at the OPERA experiment recorded neutrinos traveling faster than the speed of light. Within the scientific community it sparked a heated debate not only about the veracity of the results, but also about when controversial scientific results should be released to the public. Voices from across the spectrum have spoken up, some supporting the research team’s decision to release the information to the public, and others decrying it.

There has been sharp disagreement over whether or not the press coverage that followed left the public with an accurate picture of the situation. In an article penned for the Los Angeles Times, Lawrence Krauss of Arizona State University wrote that “the way [OPERA’s result] was presented to the world is cause for concern. A dramatic claim from a distinguished laboratory that turns out to be false reinforces the notion that somehow science is not to be trusted, that one can dismiss theories one finds inconvenient.”

In an interview, he expanded on his concerns over the announcement. He worried that internal scientific debates over technical matters would be misinterpreted by members of the public as scientists disagreeing over fundamental laws of nature.

“We have to be very careful because the public doesn’t know better.”

Many scientists are highly skeptical of the OPERA results, and expect them to be explained away by some as yet unknown systematic error. At issue was whether the public at large understood the preliminary nature of the results, or if that was too much of a subtlety for news media looking for an easy headline.

“People are actually talking about sigmas and how things have to be checked and crosschecked,” said Katie Yurkewicz, the Director of the Office of Communication at Fermilab. “It’s nice to see some of that being covered in the media.”

James Gillies, CERN’s head of communication, said that he was generally happy with the way the press covered the story.

“I think that by and large the world got it right,” Gillies said, “Our analysis of the coverage afterwards showed that as well.”

Krauss however said that he felt that the news media hyped the story and focused on the controversial implication that faster than light travel undermines the theory of special relativity.

Still others have taken a more carefully nuanced view.

What role these news reports have on the general public’s overall perception of science is at the core of many of these debates. A big concern is whether members of the general public see a news item about a scientific discovery seemingly overturning long-established theories, and start to lose faith in the authority of scientific results.

“People get the impression that science is just a series of fads,” Krauss said.

On the flip side is the opinion that the public is interested in the process of science, and has a right to know how it works. Announcements like OPERA’s have been seen as a way for people to learn about what happens within large scientific collaborations.

“I don’t see why we can’t tell the public when we’re making progress but not there yet,” said Sean Carroll of Caltech. “More information is more honest. The public can get a better idea of how science actually works.”

These kinds of debates are likely to intensify in the future as the public continues to get a more unfiltered view of the internal workings of science. The internet has changed the paradigm of how and when news is released and through what channels. Information about big discoveries, especially at large collaborations, is nearly impossible to keep out of public view for long. In many fields of physics, including particle physics, it is now standard practice for the preprint of an upcoming paper to be posted to the online website arXiv.org, where it is freely accessible by anyone, including the press.

“The world, the blogosphere, the press was talking about this before CERN put out any press release,” Gillies said.

In addition, huge research teams like OPERA or the ATLAS and CMS collaborations are made up of scientists from hundreds of institutions. Coordinating what information is released and when can be difficult.

“These collaborations have thousands of people, all of whom have access to the internet and can tell people about findings,” Yurkewicz said.

Leaks are not uncommon, and can quickly spiral out of control. In April, an internal memo from the ATLAS collaboration about a supposed detection of the Higgs boson was posted to Peter Woit’s blog “Not Even Wrong.” Over just a few days, rumors circulated around the world until CERN put out an official statement saying that the memo was not a definitive statement of any official results.

Preprints, leaks and rumors like these have shaped how public information officers deal with potential news coming out of labs and experiments in the age of the internet. Press officers say they have to try to be the first to release information in order to have their voices heard and stay ahead of the rumors.

“I think it’s more confusing for the public that results are being made public anyway, being disseminated by people who are not part of the collaboration,” Yurkewicz said.

Such was the case with the OPERA results. They were presented not at a true press conference per se, but an open seminar showing results which garnered much press attention. In conjunction with the seminar, CERN put out its own press release, which featured caveats about the results including, “independent measurements are needed before the effect can either be refuted or firmly established. This is why the OPERA collaboration has decided to open the result to broader scrutiny.”

Even before the press release and seminar, information about the findings started appearing on the internet and in the popular press. Postings by the scientists on the internet and interviews given to the news media prompted CERN to put together a press release about the findings. Gillies said that in the days before December’s seminar that presented “tantalizing hints” of the Higgs boson, news of the findings likewise started to trickle out.
“In these two cases we’ve been trying to tone down what has been said about them already,” Gillies said. “We’re not driving this conversation, we’re joining it.”