A Smooth and Silky Career 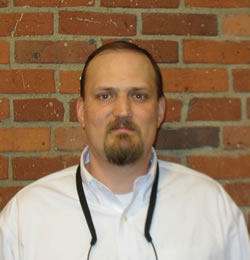 The seemingly pedestrian razor blade you utilize every day is really something quite extraordinary. Its components are crafted from advanced composite materials and thin films. Its design draws from novel engineering solutions to reducing friction. And its ability to make anyone’s face, legs and back silky and smooth is owed to talented physicists, like Jeffrey S. Parker, who have chosen the personal care industry as their professional playground.

Parker, 39, is a Senior Scientist at Procter & Gamble (P&G)’s South Boston Innovation Center. The materials physicist, who received his PhD from Florida State University in 2003, has been with the company since 2007. He was on track to have a conventional academic career, completing two postdocs, including one at the University of Minnesota’s Materials Research and Engineering Center, when fate nicked him.

“I was approached by a P&G recruiter,” he recalls. “I wondered what they wanted from me, a physicist.” Turns out P&G Beauty and Grooming was expanding its market reach with a recent acquisition of the Gillette Company. They needed physicists and materials scientists who could understand the physics behind blade movement and architecture, in order to design and improve high profile products like Fusion ProGlide Razors, which incorporate many blades. Parker visited P&G’s technology center “out of pure curiosity,” and realized “there was definitely enough technical challenges to keep my interest,” he says. According to Parker, what swayed him to pursue employment with the cosmetics giant was the fact that the consumer problems he would be solving would allow him to flourish as a physicist, the problems would always be fresh and exciting, and there would be plenty of other scientists and resources to aid him in his technical and engineering endeavors.

Once Parker started at P&G, he soon realized there was another advantage to serving as a shaving scientist–it is inherently a multidisciplinary endeavor, which means that he would have the opportunity to learn about different fields. “There’s so much overlap [between subjects], you can’t just be a physicist,” he says.

Parker’s role at P&G Beauty and Grooming involves every aspect of research and development for blades and razors, marketed under the Gillette brand. His responsibilities include fundamental and applied research, testing and developing products, and collecting feedback to improve the quality of his designs. He contributes to the marketing of products, providing the lay-person-friendly language for packaging and advertisements that properly communicate the product’s value. He also consults with the production department to ensure they can scale up the design as they produce it in a plant. “It’s one thing to make it once, and quite another to make it a billion times,” he says.

Parker is further charged with claims support, an important division in any consumer products company. For every razor that a firm claims “will give you a 45% cleaner shave,” there is a claims support unit that clarifies the accuracy of such a statement before it is used in promotions. Parker assists claims support in testing the current shaving products for their strength, accuracy, friction reduction, and overall shaving comfort.

Here’s a fun fact to keep in mind while you are gliding that razor across your precious, precious face: the blades used for shaving are some of the most sophisticated and sharp cutting surfaces on the planet. In particular, “Fusion blades are thinner than a grain of sand, and the blade tip radius is smaller than a brain cell or the wavelength of visible light,” describes Parker. “This level of ultra-high precision engineering is amongst the highest in the consumer goods industry.”

The physicist has been instrumental in advancing the Fusion ProGlide line of products, which currently utilizes five blades in its razors. Parker’s expertise has helped him analyze and improve on cartridge geometry, how the razor pivots on the handle, and how the blades themselves move. In his quest to make the profile of the razor as thin as possible, Parker helped employ an advanced diamond-like carbon (DLC) coating to the steel along the blade edge. This extreme hardness material (more than 10 times the hardness of the underlying steel) enhances each individual blade’s strength and allows the blades to stay sharp even after many uses. Another proprietary coating, Polytetrafluoroethylene (PTFE), is also applied to the blade, which significantly cuts down on friction, he explains. But the DLC coating is especially important to the ProGlide’s architecture because it ensures that the blades in the razor can remain thin, delivering significant reduction in “hair cutting forces”, and thus a more preferred consumer experience (i.e., fewer toilet paper pieces applied to your bloody face).

Parker concludes that his work for P&G is not as dissimilar from academia as he would have expected. “When you get down to it, the science is completely the same,” he explains. “It’s the same tools, methodologies, and thought processes, just applied differently.” He still delves into surface morphology, he still measures and analyzes electrostatic forces, and he still uses many of the same instruments that he did when he was a postdoc, such as an atomic force microscope.

But one area that he still finds perplexing is how to find technical solutions for consumer problems, when the consumers are not exactly sure what they want in the first place. “The needs of the customer can be hard to define,” he concedes. For example, in a focus group, consumers might indicate that they want a shaving lotion that is more “creamy.” But there’s just no scientific training that can help Parker and his colleagues understand exactly what “creamy” means to different people in terms of the physics, mathematics and materials expertise that goes into crafting shaving lotion.

But the haziness of certain aspects of his job doesn’t take away from the high level of satisfaction he gets from working in the private sector. “In academia you never get to see a commercial for your work on TV or your item on a shelf,” he says. “People want to buy P&G products because of the science and engineering we put into them.”

Alaina G. Levine is a science writer and President of Quantum Success Solutions, a science careers and professional development consulting enterprise. She can be contacted through www.alainalevine.com.