Mmm, Mmm, Physics! The Man with the Plan for Cans 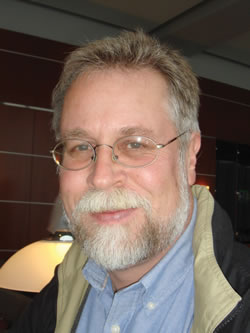 Alexander Skutlartz did not expect to work in the soup business. He did not plan to make his mark with mushrooms or to develop an x-ray innovation for metal cans. But when Campbell Soup Company offered him a job, he couldn’t say no.

With a PhD in atomic collision physics from Kansas State University and experience at Argonne National Laboratory and the University of Frankfurt in his native Germany, by 1988, Skutlartz had settled into an academic career at East Carolina University. His wife, whose expertise is in grain science, found a job at Campbell’s, and for a few years, the couple commuted back and forth between North Carolina and New Jersey, where the company’s headquarters is based.

In 1992, when the couple had had enough of the two body problem, a fortuitous meeting with Campbell’s Vice President of Process R & D and Process Safety allowed Skutlartz to chart a new career course. Following a chat about his research, the executive asked the physicist to do some consulting for the corporation. One week of consulting over spring break turned into another week over winter recess, and so on, until “I hinted that I wanted a permanent position,” he says. Campbell Soup agreed. When the semester ended, Skutlartz segued from protons to potatoes.

Although his initial assignments focused on optical sorting, “mainly physics but how it is applied to the food industry,” he explains, it wasn’t a completely smooth transition. “The vice president who hired me took a fairly large risk. There were people who were dead set against hiring me. They were used to chemical engineers working as process engineers, but not physicists.” Furthermore, as Skutlartz later found out, a PhD “can be the kiss of death in the food industry,” he says, and it is even rarer to find a leader in the industry with a PhD in physics.

But Skutlartz prevailed at the firm. “I did what the company couldn’t do,” he admits. “If they needed a crazy idea they would come to me. I wasn’t working in the food industry for a long time and therefore could look at the problem from outside the box.”

One of the first “crazy ideas” that struck Skutlartz at Campbell’s involved the use of optical sensors to sort mushrooms. Optical sorting was in its infancy at the time, he explains, and the company, in its quest to make white mushroom soup, needed a way to quickly examine, identify, and remove any mushrooms that were dirty from the growing process. Together with an outside company, Skutlartz developed an optical sorting system (using simple color cameras) and the software needed to run them to spot any imperfections on the ‘shrooms from a 360 degree angle. This was revolutionary for the business–the sorters processed several tons of the fungi every hour, saving the company precious time and millions of dollars of lost income from unsatisfactory product.

His next task was equally interesting, although clandestine. “I can’t talk about it,” he says with a chuckle, but in all seriousness, “it saved the company lots of money and involved a vacuum chamber.”

Skutlartz found similarities between laboring in the food arena and in physics, especially when it comes to the length of time it takes for projects to come to fruition. One of his most significant innovations took ten years to complete: high-speed x-ray imaging systems for evaluating product after it had been sealed in cans. This groundbreaking invention was important for many reasons. Prior to Skutlartz’s solution, there was no way to know for certain if foreign material was present in a can of soup after it was sealed. The x-ray systems also allowed plant operators to know the exact weight and level of the soup in the container, which “was very critical for safety processes and sterilization,” he explains. For example, if a can of potato soup has twice as many potatoes as it is supposed to have, then during the sterilization process, it won’t heat up enough to properly prepare the soup for safe consumption. The x-ray system furthermore detected if any leakage was present.

Skutlartz initially collaborated with a vendor in Italy that utilized x-ray systems for checking tires used in race cars to design and build the system for Campbell’s that would not only be efficient, but would also not take up too much floor space. “It took five years [just] to develop a good system,” he says. One of the problems in food manufacture is that plants are very crowded with myriad machinery, he continues, and the x-ray systems that existed a decade ago were very large–they had a 50 to100 square foot footprint, which was difficult to incorporate into a plant where space is at a premium.

In addition to researching and fashioning the technology, Skutlartz was also responsible for coordinating the integration of the technology into the plant’s overall operating structure, and writing manufacturing procedures for using the invention. The innovation specs were impressive: It was the first system that simultaneously detected foreign materials and checked weight in metal cans, it had a smaller footprint and was a considerably cheaper device than anything used before, and it could process 1300 containers/minute. Its value was considerably non-trivial: The foreign material detection program resulted in a huge cost avoidance (due to the prevention of product recalls), and the “checkweighing” element resulted in substantial line efficiency increases compared to mechanical checkweighers, he says. On the first day it was installed in a German plant, two dozen bones were found in sealed cans. Needless to say, the plant quality manager was ecstatic, recalls Skutlartz.
Skutlartz went one step further with the x-ray innovation. He launched a research program at the company to make common plastic materials (a portion of foreign material normally not detectable and often resulting in consumer complaints) detectable by x-ray imaging. The program resulted in a first for the food industry: a changeover from common plastic materials to FDA approved x-ray detectable plastics. “The program already resulted in a noticeable reduction of consumer complaints and product-on-hold for plastic contamination,” he says.

Because Skutlartz was the go-to guy for all sorts of problem solving, he regularly traveled upwards of 100,000 miles every year to different manufacturing facilities to meet with operators. “One of my jobs in the plants was to look for bottlenecks,” he adds. “The operators in the plants would always call me if they had a problem.”
His greatest joy at Campbell Soup Company was “getting up every morning and not knowing what new questions would be thrown at me,” he jokes. “It was a constant challenge. Some of the challenges I created.” After noticing that a need existed to have a precise way to measure liquids in very small amounts while containers moved quickly on a manufacturing line (around 1200 cans/minute), he created and implemented a system to drop precise doses of liquids into moving cans. “The biggest problem was not to hit the cans with the drops, but to design nozzles that prevented the drops from recombining into a stream of liquid, which would have resulted in the loss of dose definition,” says Skutlartz. He collaborated with a vendor that worked for a pharmaceutical company to orchestrate a fully automatic digital beverage blending system with up to 130 gallon/min production capability. It resulted in substantial increases in ingredient yield and line efficiency, and rapid (4 to 15 minute) product change-over capability.

During his 18 years with the firm, Skutlartz rose through the ranks and eventually became a Senior Research Manager/Senior Scientist, Global Process Research & Development. He was essentially a technical fellow, and besides his day-to-day responsibilities, he had the freedom to pursue his own research projects. He often partnered with university consortia to develop new technology.

Although he is no longer with Campbell Soup Company, he considers his time there to have been  intellectually exciting and he is glad to have had the opportunity to apply his physics skills to the food industry. “No matter what industry one works in,” notes Skutlartz, “as physicists we are well trained to be analytical problem solvers. And with the right amount of intellectual curiosity and imagination, it really can become a fun ride to shape the future of something as simple as a bowl of soup.”