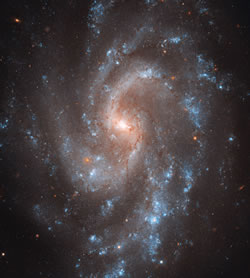 Hubble's View of NGC 5584
Three astrophysicists, two of them US-based, were awarded the 2011 Nobel Prize for physics for “the discovery of the accelerating expansion of the Universe through observations of distant supernovae”, and, in an unusual twist, this year’s chemistry prize was awarded to research first published in Physical Review Letters.

The Nobel Prize Committee awarded half of the physics prize to Saul Perlmutter at Lawrence Berkeley National Laboratory, while the other half was split between Brian Schmidt at the Australian National University and Adam Riess at Johns Hopkins University. The chemistry prize was awarded to Dan Shechtman of the Technion–Israel Institute of Technology for his discovery of quasicrystals.

In the mid 1990s, the two research teams that were headed by Perlmutter and by Riess and Schmidt respectively, examined the redshifts of distant supernovae to measure the expansion of the universe. They both independently published findings in 1998 announcing the unexpected conclusion that the universe appears to be accelerating as it expands. The discovery came as a complete surprise to the field, and its cause remains one of the biggest mysteries in cosmology.

“Not only do we not know what dark energy might be, that would be making the universe expand faster and faster, we don’t even know whether really the answer will turn out to be a new energy in the universe,” Perlmutter said in an interview with Nobel Media following the announcement. “It’s possible that we’ve just discovered an extra wrinkle in Einstein’s Theory of Relativity, and that that would be the real final result. But at this point, the job is really back in our court again as observers, and we have to come up with more data that will help narrow in on what the answer is.”

“I think that the idea of the accelerating universe, indicating that there was some other big thing in the universe, other than things that have normal gravity, meant that a lot of the problems that existed in cosmology back in 1998 were suddenly solved if this stuff existed,” Schmidt said in an interview with Nobel Media. “So there were a lot of people, especially theorists, who wanted the universe to be geometrically flat, which means it had to have a lot of stuff in it that we just didn’t know was there. And this stuff solved that problem. It gave the extra matter in the universe that needed to be flat.”

Many have compared dark energy to Einstein’s “cosmological constant,” which he introduced to explain the then-current belief that the universe was static. In 1999, Michael Turner of the University of Chicago, who is currently APS vice-President, coined the term “dark energy” in a paper published in Physical Review D.

In 1982 Dan Shechtman discovered that certain alloys of aluminum and manganese if cooled rapidly produced a diffraction pattern hitherto believed to be impossible. Up to that point it had been thought that crystals could only form in regular repeating patterns; however, the diffraction pattern that Shechtman saw was evidence that crystals were forming in a pattern that couldn’t be precisely repeated, reminiscent of the tiling patterns of mathematician Roger Penrose. Shechtman’s finding was highly controversial, and at one point he was asked to quit his research group. It took nearly two years of persistent effort to get his research published.

“The discovery of quasicrystals was so revolutionary,” said APS Editor in Chief Gene Sprouse in a press statement, “that Shechtman initially had trouble getting a peer-reviewed science journal to publish his research. However, by the time he submitted it to Physical Review Letters, some experts had become aware of its importance and it was quickly accepted and published, and is now one of the ten most cited articles in the history of the journal.” [Ed. Note: APS News published an interview with Shechtman in the January 2003 issue as part of its PRL “Top Ten” series.]

Soon after the publication in PRL, crystallographers the world over started seeing the pattern in other materials and Shechtman’s discovery forced scientists to fundamentally reassess long held assumptions about the molecular structure of matter.

APS was quick to congratulate the winners of the prestigious awards.

“The discovery of cosmic acceleration and dark energy provided the last piece in the current cosmological model and at the same time gave us the most profound mystery in all of science–what is dark energy, the source of the repulsive gravity that is causing the universe to speed up?” Turner said in an APS press statement.

“On behalf of the American Physical Society,” APS Executive Officer Kate Kirby said in a statement, “I offer our warmest congratulations to each of the 2011 Physics Nobel Prize winners. Their work has profoundly impacted our view of the universe and has challenged us with new questions.”

In a separate statement, she recognized the achievements of Shechtman as well, “I extend warmest congratulations to Professor Shechtman for his pioneering discovery of quasicrystals, which has given birth to a rich field of study at the intersection of physics, chemistry, and materials science.”