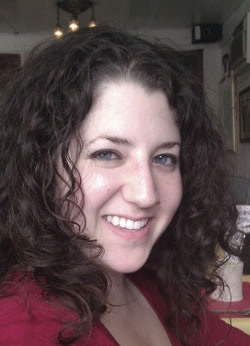 Ed. Note: Each year, as part of a program run by the American Association for the Advancement of Science, APS sponsors two media fellows, who spend the summer at a media outlet, learning the craft of science writing. Sometimes this leads to a career in journalism; sometimes it produces a scientist with a more nuanced understanding of how the media operate. In the following article, one of the 2011 APS media fellows, Sophie Bushwick, recounts her experience. A second article, by media fellow Helen Chappell, will appear in the November issue.

In college, I started to hate telling people my major. The first time someone responded, “Oh, you must be so smart–I could never understand physics!” I thought it was a compliment. The tenth time, however, I realized that they weren’t praising me so much as dissing the science that I love. I began defending physics, gushing about the latest concept I’d learned and trying to convert my audience into physics lovers.

To me, science journalism is just another way for me to share my physics enthusiasm. Another perk was that science writers get to learn about and communicate a wide variety of topics rather than specializing in any single subfield. While my fellow majors were applying to graduate school, I was applying for a AAAS Mass Media Fellowship. I was delighted to find out that I got a fellowship at Scientific American, thanks to sponsorship from APS.

As I learned, I wouldn’t be writing for the magazine but for the Scientific American website. Although it might have been cool to see my name in print in the physical magazine, I found that the internet let me communicate science in a variety of new ways. Of course, the website is a forum for articles from the magazine, and additional news articles written by the online staff and freelancers. But I also got to write more casual blog posts illustrated with photos and videos. I recorded short, pun-filled podcasts for subscribers who like to listen to their news. For image galleries, one of my favorite types of assignment, I found beautiful photos of stars, molecules, and spider webs and wrote extended captions explaining the science behind them.

All summer, I started my morning with a hunt for new story ideas. Next, the online staff met to pitch stories and discuss what everyone would be working on, and then we dispersed to do research, write articles, and make science news. Not all of that sharing was limited to the website. Today’s science communication has also moved into social media. On Facebook and Twitter, I provided links to the science stories I wrote and the ones I read. Being part of the Scientific American online staff was wonderful not only because I got to learn about new discoveries, but also because those I found new ways to share them.

Science communicators have more tools than ever before with which to encourage their audience to embrace science. Despite the decline of traditional print media, it’s an exciting time to become a writer, and that’s just what I intend to do. Because of the amazing experience I had during this fellowship, I’m embarking on a career as a freelance science journalist. My goal is to change the way people respond when I tell them that I majored in physics. Instead of replying that they just don’t get it, I want my audience to say, “Oh, that sounds awesome–I love physics too!”