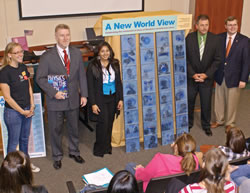 A New World View was presented to North Adams High School in rural Seaman, Ohio at a small ceremony on September 13.

Artwork commissioned by APS for the World Year of Physics in 2005 has found a new home in southern Ohio. A New World View was presented to North Adams High School in rural Seaman, Ohio at a small ceremony on September 13. In the photo at the ceremony are (l to r): APS Head of Public Outreach, Rebecca Thompson; North Adams science teacher Randall Dunkin; Spanish teacher Olga Cruz; school principal Greg Grooms; and Stephen Caraway, a representative from the office of Congresswoman Jean Schmidt (R-OH).

The school requested to host the art because many images used in it are of students who went to the high school.

The World Year of Physics marked the 100th anniversary of Albert Einstein’s “miracle year” when he published three papers that revolutionized much of physics. The work had previously been exhibited at Brookhaven National Lab, at the Maryland Science Center in Baltimore, and at the APS editorial offices in Ridge, NY.

Created by the Washington Glass Studio, the artwork consists of four tall panels, each  containing eight transparent blue glass panes. Each pane features a relief sculpture depicting an aspect of Einstein’s life or an application of his work, such as dice representing the randomness of the universe, or a trio of violins, the instrument he loved to play. Behind each pane is a photo of a child peering through the relief, four of whom are students from North Adams high school.

“It served to be a really great vehicle to communicate to our students that they can reach out to other parts of the country and the world,” said science teacher Randall Dunkin.

The school first got involved with the artwork when Dunkin heard about its call for photos and shared it with Spanish teacher Olga Cruz, an amateur photographer who was excited to participate in a nationally focused project that combined art and science. Four of Cruz’s photos were used on the artwork itself and 88 were used on an accompanying poster.

“I think our students, when they see themselves on the poster, they think that by working hard they can fulfill their dreams,” Cruz said.

Chase Burns was a freshman when Cruz snapped his photo. His image appears on the top left panel, behind a relief representing the computer chips made possible by Einstein’s improved understanding of molecules and atoms. Today he is at Southern State Community College, has earned his associates degree in science and is looking to go into exercise science.

“Science is always what I’ve been good at really, so I decided to stick with it,” Burns said, adding that he thought it was “pretty neat” that his image was included on the artwork.

When word spread that the artwork was going to be hosted at the school, about a dozen sophomore girls formed a focus group for those interested in going into STEM fields. Katrina Borchers is the director of the group.

“I think it’s a really great honor to have it here,” she said, adding that she hoped other students would take the time to understand its importance. She said that after graduating, she was interested in going to college to study physics.