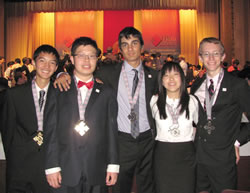 
The United States’ physics Olympiad team is back in the US with gold and silver medals in hand. The team spent a week in Bangkok, Thailand, competing against almost 400 students from over 80 countries at the 42nd International Physics Olympiad.

“We were pleased. We go to the competition hoping to do our best, and we try to instill healthy study habits to help students do that,” Paul Stanley, the team’s senior coach, said.

Gold, silver and bronze medals were awarded to those competitors who scored at least 65 percent on their exams. Her Royal Highness Princess Maha Chakri Sirindhorn, a member of the royal family of Thailand, handed individual medals to around two hundred medal winners at the closing ceremony on the last day of the competition.

This year’s Olympiad took place from July 10–17. The international physics competition for high school students first started in Eastern Europe in 1967 before it grew into a worldwide competition. The U.S. joined the competition in 1986 when three team members won bronze medals, the best debut of any participating team. Though the competition doesn’t rank teams in terms of medal count, if they did, the U.S. would have tied for eleventh place this year.

At the competition, students face exams on a range of physics subjects, answering three theoretical exams and completing two laboratory experiments. This year’s theory question topics included a three-body problem, charged soap bubbles, and Rutherford scattering. The first experiment question required the students to determine the shape of a capacitor and the second had them locating a ball inside a tube. Exams are administered in the students’ native languages and all of the team coaches review the students’ answers to calculate the winners.