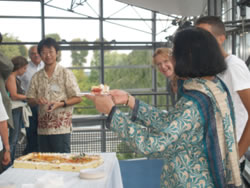 As described in two articles on the ICPE website, ICPE was founded by a group of physicists who saw a need for collaboration and cooperation related to the teaching and learning of physics at all levels of instruction. As with all of the commissions of IUPAP, ICPE seeks to foster cooperation and collaboration on issues related to research and development in the teaching and learning of physics. Of course, education systems are vastly diverse in different countries (and sometimes even in different regions within a country). However, research over many years has shown that physics instructors at all levels face many of the same challenges and can utilize many of the same solutions worldwide. In this article, I will discuss some of ICPE’s approaches to international collaboration in physics education.

The international character of physics education research is very apparent in an area of research called conceptual change. As an example, we find that many students come to us with a somewhat Aristotelian world view–a constant force results in a constant velocity. Helping students to learn the limitation of this view, and to adopt a Newtonian view, is to change the students’ conceptual view of nature. Reinders Duit at the Institut für Pädagogie der Naturwissenschaften in Kiel, Germany has created a bibliography on research concerning conceptual change. A quick glance at this bibliography (http://www.ipn.uni-kiel.de/aktuell/stcse/stcse.html) shows that the study of this topic and development of materials to address it are truly international.

Of course, differences between countries in teaching and learning do exist. For example, we see at the secondary level, differences in achievement on standardized tests such as The International Mathematics and Science Study (TIMSS) and Programme for International Student Assessment (PISA). The meaning of these differences is discussed widely and is beyond the scope of this article. However, in spite of cultural differences and a variety of educational systems throughout the world, physics instructors and physics education researchers find a large number of common concerns and are frequently able to share results and instructional materials which are a benefit in many different situations.

Within physics education research, similarities of student learning and struggles with physics seem much more common than they are different. To encourage exchange of best practices, the Commission undertakes a variety of activities to encourage physics educators and physics education researchers to share their research, success and concerns through sponsoring an annual conference on a specific physics education theme. In 2010, the conference entailed a joint meeting with Groupe International de Recherche sur I’Enseignement de la Physique (GIREP) and the Multimedia in Physics Teaching and Learning Group (MPTL). Both GIREP and MPTL are international groups with a majority of their membership in Europe. The theme of the conference was “Teaching and Learning Physics Today: Challenges? Benefits?” and was held at the Université de Reims, Champagne Ardenne, Reims, France. A summary of the conference can be found in the Commission’s newsletter which is available at http://web.phys.ksu.edu/icpe. This conference ended with a celebration of ICPE’s fiftieth birthday.

The next conference, “Training Physics Teachers and Educational Networks”, takes place in Mexico City, 15-19 August 2011. The co-sponsor for this conference is the Latin American Physics Education Network. The website is http://www.icpe2011.net.

Most of the ICPE conferences have had a format typical of physics conferences. Thus, they include plenary lectures and invited and contributed presentations. A somewhat different format is being envisioned for the World Conference on Physics Education (http://www.wcpe2012.org/) which will be held in Istanbul, 1-6 July 2012. ICPE and GIREP are the primary sponsors of this conference and the American Association of Physics Teachers Executive Board has endorsed it.  Other physics education organizations are expected to be involved as well. Rather than just including presentations and workshops, this conference will focus on identifying common interests in physics education research and development.

The format of the conference mentioned above will be modeled on the education strand of the World Conference on Physics and Sustainable Development (WCPSD; http://www.wcpsd.org/) that was held in Durban, South Africa in 2005. During the 2005 WCPSD, one of the working groups of the education strand noted that many of the instructional innovations which are based on physics education research had not had wide dissemination and implementation in developing countries. The working group proposed establishing a series of workshops which could provide hands-on experiences for physics faculty in these countries. In 2009, three members of ICPE (Pratibha Jolly, Elena Sassi and Dean Zollman) working with Priscilla Laws created the first such workshop.  PHYSWARE: A Collaborative Workshop to Promote Physics Teaching and Learning in the Developing World was held at the International Centre for Theoretical Physics (ICTP). Support for the workshop came from a variety of sources including follow-up funds from the World Conference, ICTP and APS. Thirty-two faculty from Africa, Asia and South America participated and agreed to further disseminate the ideas of the workshop in their home regions. More information can be found in the International Newsletter on Physics Education and at the website for the workshop at http://cdsagenda5.ictp.trieste.it/full_display.php?ida=a07137. This workshop was conceived to be the first in a series of such workshops on physics pedagogy for university faculty in developing countries. Present plans are to hold a regional PHYSWARE workshop in Delhi, India, in the autumn of 2011.

Using this model, we anticipate that the 2012 World Conference on Physics Education will encourage collaborations which will continue after the conference in much the same way that the PHYSWARE Workshops developed in Durban have continued beyond the 2005 WCPSD. The Commission and GIREP anticipate holding such a conference once every four years.

Over the past 20 plus years, physics education has emerged as one of the areas of research and development that has a home in many physics departments. This emergence has provided an increased need to pay attention to the international nature of this sub-discipline of physics. Thus, after 51 years since its founding, the International Commission for Physics Education continues to be active and vital to the improvement of physics teaching-learning worldwide and to the goals of the physics community.