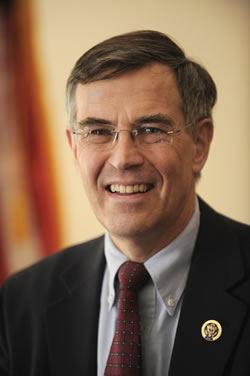 For most of the last 150 years, America’s leadership in science, technology, engineering, and innovation was unquestionable. Our nation invented the light bulb, the telephone, the Model T, the personal computer, and the Internet. We discovered penicillin, abolished polio, and helped to rid the world of smallpox. America’s capacity for innovation was not only the envy of the world; it was also the driving force behind the world’s economic progress, helping to lift billions of people out of poverty. The sky seemed to be our limit–and, as Neil Armstrong proved in 1969, even that limit could be breached.

There is no doubt that America remains capable of extraordinary innovation. We are still the nation of Google and Facebook, of the iPhone and the Chevy Volt. Yet we are no longer the world’s unquestioned leader. In 2009, the Information Technology and Innovation Foundation found that five other nations had pulled ahead of the U.S. in overall innovation and competitiveness–and we are falling further behind. Over the last decade, every one of these competitors has improved its innovation capacity faster than America has.

I suppose we should be heartened that other nations are making their own strides forward in science and technology.  If a scientist in China were to cure AIDS tomorrow, it would be not merely a victory for the Chinese people; it would be a victory for all mankind. Yet America must not be content to piggyback on other countries’ inventions. We have never accepted dependency. We have been proud of our status as a world leader, and we can still be the world’s engine of economic and social advancement.

In 2005, the National Academies laid out the problems facing America’s future competitiveness in an influential report titled Rising Above the Gathering Storm. The report described a nation at risk of falling behind our competitors:  not educating our children in science, technology, engineering, and mathematics; not inventing at the same pace as other nations; and not producing new jobs in high-technology fields. The report was a call to action, and for a brief moment, it captured the attention of scientists, economists, think tank experts, government officials, and lawmakers.

And then the moment passed. Despite the attention devoted to the Gathering Storm report, most of the goals it laid out remain unaccomplished. The problems it described remain unresolved–in many cases, even unaddressed.

Yes, America has made some halting progress. Most notably, Congress passed the America COMPETES Act, which authorized a doubling of the budgets at many of our key science agencies. The same law created the Advanced Research Projects Agency–Energy (ARPA-E), a new program at the U.S. Department of Energy intended to identify and fund transformative energy research. The law also established a handful of new science, technology, engineering, and mathematics education programs, which have had varying degrees of success.

Yet although the COMPETES Act laid the groundwork for a new era of investment in science and research, that groundwork remains mostly bare. The law envisioned a doubling of science budgets, yet Congress has appropriated far less money than was authorized. ARPA-E received its first block of funding in the 2009 Recovery Act, yet Tea Party members of Congress are now calling for the agency’s elimination. Some are even calling for the elimination of the entire Department of Energy. The COMPETES Act passed the House by a vote of 367 to 57 in 2007, yet in 2010, the House of Representatives needed three separate tries to reauthorize the law, and the final vote was far closer and more partisan.

The U.S. response to the Gathering Storm report was, in other words, uncertain and insufficient. The inadequacy of our efforts was recently laid out in the National Academies’ five-year follow-up report. The Committee unanimously concluded that, since the issuance of the original report, “our nation’s outlook has worsened”–and that the “Gathering Storm increasingly appears to be a Category 5.”

How have other nations succeeded while America has stagnated? That question has no single answer, but one fact is telling. Each of the five nations ranked by the Information Technology and Innovation Foundation as “out-competing” the U.S. has implemented a national competitiveness or innovation strategy:  that is, a unified plan to marshal their governmental and private resources to support new technologies and ideas. Worldwide, at least 30 countries have established their own competitiveness plans. Yet the U.S.– alone among the world’s technological leaders–has failed to draw up a roadmap for innovation. Is it any wonder that, with no clear view of our destination, America has failed to make strides in the right direction?

During the most recent Congressional debate on the COMPETES Act reauthorization, I worked to address this shortcoming. I successfully offered an amendment requiring the White House Office of Science and Technology Policy to submit to Congress a comprehensive national competitiveness and innovation strategy. Further, the Secretary of Commerce must complete a National Competitive and Innovation study by early 2012, laying out recommendations on how America should invest in human capital, facilitate entrepreneurship and innovation, provide federal support for locally and regionally driven innovation, strengthen the economic infrastructure and industrial base of the United States, and improve the international competitiveness of the United States.

My amendment was included in the law signed by the President, and America is finally on course to implement a national innovation strategy. That’s the good news. The bad news is that Congress has not demonstrated a willingness to make the investments necessary to implement such a wide-ranging, audacious plan. Too many members of Congress, obsessed with cutting the size of government, are hostile to the funding required to sustain America’s leadership in science and technology. Despite evidence that investment in science can create jobs, these members have sought at every opportunity to slash funding for research, education, and infrastructure.

For example, the 2011 budget eliminated the summer Pell program I helped establish to support students who work while earning a college degree. The 2011 budget also eliminated 19 elementary and secondary education programs, including Even Start, Striving Readers, School Libraries, National Writing Project, and Reading Is Fundamental. The 2011 spending bill also reduced funding for Department of Energy research programs and loan guarantees that are critical for the development of sustainable energy technologies.

More evidence of Congress’ skewed priorities can be seen in the debate over the nation’s budget for Fiscal Year 2012. The House recently passed a bill that would slash funding for the Department of Energy Office of Science to $800 million below the levels envisioned in the COMPETES Act. During debate on the bill, I offered an amendment to restore at least a portion of that funding so the Office might maintain its ongoing operations. My amendment was defeated.

Now is not the time to be slashing federal investment in research and development in science. Investments in our federal science agencies and our national innovation infrastructure are minimal down-payments on our country’s security, public health, and economic vitality that we cannot afford to postpone.

The hostility to scientific research extends unfortunately beyond direct federal funding. The new majority in Congress has also sought to repeal regulations that support energy efficiency and innovation. For example, in early July, the House of Representatives held a surreal debate on the so-called Better Use of Light Bulbs (BULB) Act. The BULB Act had one purpose:  to repeal energy efficiency standards that had been enacted with bipartisan support in 2007 and signed into law by President Bush, requiring that new light bulbs use about 25 percent less energy than traditional incandescent light bulbs. (Most undergraduate physics students probably know that 90 percent of the energy from incandescent bulbs is wasted as heat.)

Opponents of these efficiency standards launched an all-out, unscientific attack, using rhetoric that bordered on the absurd. The Wall Street Journal, in a blistering op-ed that railed against the “light bulb police,” falsely claimed that “Washington will effectively ban the sale of conventional incandescent light bulbs.” This was, of course, untrue. No type of light bulb was banned. No consumers were forced to use one type of light bulb over another type. The new standards simply required that light bulbs be more efficient. As policy makers had expected and intended, lighting companies reacted to the 2007 standards by investing appropriate resources in research and development, producing for the consumer market new, more energy-efficient incandescent bulbs, as well as a variety of even more efficient fluorescent and LED lighting technologies.

The rhetoric surrounding the BULB Act is especially troubling because, if it continues unchecked, it could undermine America’s tradition of supporting innovation by setting technological standards. That tradition dates back at least to 1838, when Congress first mandated regular inspections of steamboat boilers, which until then had caused frequent, deadly explosions. Since 1978, Congress has required auto manufacturers to meet fuel economy standards, leading to a near-doubling of the fuel efficiency of new automobiles. (Allan Hoffman, who was an APS Congressional Fellow in the 1970s, was instrumental in drafting this law.) Congress also has required manufacturers to create new, more energy-efficient refrigerators, air conditioners, and other appliances. If the BULB Act’s proponents have their way, Congress could lose this important tool for promoting innovation.

Unfortunately, after some legislative wrangling, the U.S. House of Representatives adopted the language of the BULB Act. The legal status of the new energy efficiency standards is now in flux, creating expensive uncertainty in the lighting industry.

Yet there is hope that science and innovation may yet win the day on Capitol Hill. The President’s proposed budget for fiscal year 2012 recognizes the need to support innovation. Even though the budget’s overall spending is frozen at 2010 levels, it reflects a strategic decision to focus resources on the nation’s innovation infrastructure, especially basic research agencies. Despite the House’s hostility to the president’s vision, the budget for Fiscal Year 2012 is not final. There is still time for both chambers of Congress to support innovation.

In the longer term, the White House’s new innovation and competitiveness strategy will lay out, as required in the COMPETES Act, a path for future progress. The President and federal agencies are also working to create regulatory certainty so that manufacturers and inventors can make the long-term investments necessary for real innovation.

Thanks to these developments, and in spite of the “gathering storm,” I remain hopeful. We must not forget that, although the 20th century is now remembered as the era of American innovation, it was also a time of missteps and misfortune. At any of the turbulent moments, Americans might reasonably have wondered whether our country would remain a global leader in science and innovation.   Yet America always continued to lead, and when we look back on the last century, we barely remember our nation’s tribulations and stumbles. We remember our successes, our breakthroughs, our giant leaps.

APS Fellow Rush Holt (D-NJ) is currently the only physicist serving in Congress. He has represented  New Jersey’s 12th district in the House of Representatives since 1999.

In this article it is stated that “We [i.e., America] discovered penicillin.” This is incorrect. Many people were involved in the discovery of penicillin, including Nobel laureates Alexander Fleming, Ernst Chain and Howard Florey, none of them American. America did pioneer the mass-production of penicillin during World War II, which resulted in the saving of many lives.

We thank Zhang Li and Leonard Finegold for pointing out this error.