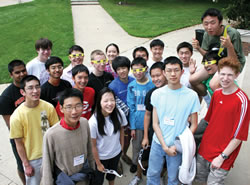 The twenty members of the Olympiad team enjoy a rare moment of relaxation.

Five team members will travel to Thailand to represent the U.S.

In a quiet laboratory down a short corridor in the University of Maryland’s physics building, about a dozen students are tinkering with weights and ropes, scribbling notes on formula-filled papers, as they scramble to finish that afternoon’s experiment. When time is up, they’ll pack up their calipers and calculators and move on to their next brain-squeezing exam.

These aren’t physics undergraduates–these are high school superstars, some of them just finishing their sophomore years. These twenty members of the US International Physics Olympiad team are undergoing the final selection process to see which five will represent the United States at this year’s physics Olympiad held in Bangkok, Thailand.

It’s Friday afternoon and though the students have been in labs and lectures all week, they still have the weekend to go before the traveling team is chosen. Breakfasted at 7 a.m. and out the door by 7:30, the students’ rigorous schedule has them cramming in fluids and thermo, waves and relativity, all before lunchtime. Afternoons are filled with more lectures, labs and exams, and study time follows a late dinner almost every evening.

“Congratulations for getting to this point,” he said to the students.

Twenty high school students out of about 400 nationwide were chosen to participate in a 10-day intensive training course at the University of Maryland. The students represent some of the best and brightest in the US, the seniors in the group bound for Harvard, Princeton, MIT, and Caltech in the fall. As smart and physics-obsessed as they are, though, they’re just regular kids too.

Ante Qu, sporting a pair of neon yellow cardboard diffraction glasses he was given before lunch, is having a debate with some of his lunch mates about whether Lego, his building blocks of choice, are better than K’NEX.

“You can do so much more with K’NEX,” Adam Jermyn said.

“If you have enough Lego pieces, you can do anything,” Qu responded.

With Lego, though, “You can’t make things that are isotropic,” Jermyn said. Okay, maybe they’re not exactly like regular kids. Jermyn tells time using his binary watch, effortlessly counting the 0 and 1 indicators to tell the hour.

The students are the latest additions to an elite group of high-school students who have participated in the Olympiad for the past 24 years. Two of this year’s coaches are former members of traveling teams: Andrew Lin is a former silver and gold medalist for the 1998 and 1999 teams that went to Iceland and Italy. Marianna Mao traveled with the team to Mexico where she won a gold medal in 2009.

The Olympiad, an international physics competition for high school students, started in Eastern Europe in 1967, before growing into a worldwide competition. The US joined the competition in 1986 when three team members won bronze medals, the best debut of any participating team.

This year, five outstanding physics and math students from each of 86 national teams will vie for gold, silver and bronze medals. The medals are awarded to individual students based on their scores. Those that score 90 percent or better on the exams will take home gold medals. Competition lasts three days, with one day devoted to theoretical problems, another day devoted to experimental problems and a day of rest in between.

The students face exams on a range of physics subjects. They will spend the weeks leading up to the competition preparing and will have an idea of what topics might appear on the exams. The exact subject matter, however, is kept secret until the exams are passed out. After all the labs and exams are completed, all the teams’ coaches review the answers and calculate the winners.

The American Association of Physics Teachers (AAPT) and the University of Maryland have organized and trained each US team from its inception. APS and the American Institute of Physics (AIP), along with more than a dozen other organizations, also sponsor the team.

The selection process for the team starts in January when high schools register for their students to take the “F=ma exam.” The top 400 or so scorers move on to take the semi-final exam. From there, 20 students are selected to be on the US Physics Team and spend a long week training at the University of Maryland in late May. At the end of the training course, five students are chosen to be on the traveling team and represent the US at the international competition.

Back in Maryland, the 10-day training course has come to a close and the traveling team has been announced. Representing the US this year in Thailand will be high school seniors Lucy Chen, of Ames High School in Ames, Iowa; Andrew Das Sarma, of Montgomery Blair High School in Silver Spring, Md.; Ante Qu, of West Windsor-Plainsboro High School South in Princeton Junction, N.J.; and Brian Zhang, of Henry M. Gunn High School in Palo Alto, Calif. Eric Spieglan, a junior from Naperville North High School, in Naperville, Ill., is the fifth traveling team member. Spieglan represented the US last year in Zagreb, Croatia, where he earned a silver medal as part of the 2010 traveling team.

For the five travelers and the rest of the team as well, the days of saturated training are over and it’s time to head back home, just in time for final exams at school. The five travelers will continue to study during the summer before heading to Bangkok where the competition starts July 11.