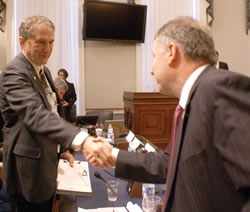 Rare and exotic elements have sparked a flurry of activity on Capitol Hill. A bevy of bills have been brought forward by members of both the House and Senate to secure continued supplies of rare elements important to cutting edge technology and research. This comes in part as the result of a recent joint APS and Materials Research Society (MRS) report looking at the future of uncommon elements critical to the nation’s future energy technologies.

The report, “Energy Critical Elements: Securing Materials for Emerging Technologies” highlighted the need to secure supplies of exotic elements ranging from cerium to yttrium. Dubbed “energy critical elements,” their unique properties have made them critical both for energy research and in modern electronics. Oftentimes these elements are rare and difficult to acquire, leading the report to recommend that the federal government do more to collect and disseminate information on their various supply chains, and support more research into their production and reprocessing.

So far six bills in the House and three in the Senate have been proposed to address securing continued supplies of these rare elements. The strategies include more mining efforts, further research and development and an increase in emphasis on recycling and reprocessing.

The bill that most closely matches the recommendations in the APS-MRS study is that sponsored by Representative Randy Hultgren (R-IL), “The Energy Critical Elements Advancement Act of 2011” (H.R. 2090). It calls for the Department of Energy, working with the Department of the Interior, to put together a report investigating the lifecycle of energy critical elements from discovery and mining through production and uses on to disposal and potential for recycling. The bill focuses especially on research into better ways to collect and recycle these elements.

“Right now no one element is in immediate jeopardy of not being available, but we are seeing less and less availability here, especially domestically, so we need to do all that we can in a market- friendly way to recognize that this is important, clearly significantly important for energy and our future in energy, but also in research,” Hultgren said in a press conference after the introduction of his legislation.

Robert Jaffe of MIT and chair of the report committee said that “[Hultgren’s] bill really includes the most important features of our report in a very compelling way.”

At a recent House Science Committee meeting, John Holdren, head of the Office of Science and Technology Policy, said that while the administration has not formally taken a position on any of the proposed legislation, it supports much of what is in Hultgren’s bill and the APS-MRS report.

“[Hultgren’s] bill calls particularly for three focuses; one is on better information, one is on recycling and one is on research. We agree with all of that, and we are already pursuing those avenues,” Holdren said.

Other bills have focused more on mining assistance, and streamlining the permitting process for new mines. Jaffe said that while important, mining won’t solve all of the United States’ future supply issues on its own. Elements such as terbium simply aren’t found in any minable quantities in the United States, while other countries like China can produce them cheaply.

“It’s a much more complex issue. Mining is an important component to a wise mineral policy, but it is only a component,” Jaffe said. “We have a diverse network of international suppliers, and it would be foolish to limit ourselves to U.S. sources.”

Francis Slakey, APS associate director of public affairs, says that likely none of the bills proposed thus far will be signed into law in their current form. “The only way for a bill to get to the President is if there is some merging,” Slakey said. He said that right now the various representatives and senators are negotiating to work out a more expansive bill that will cover the gamut of issues.

Though no final bill has yet emerged, critical materials have been quickly gaining a lot of interest in Congress. “We’re really on the fast track,” Slakey said, adding that typically it can take between three and four years from when an issue emerges and congress passes final legislation. The APS-MRS study however was released in February of this year, as reported in the March APS News.