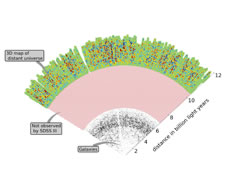 The third Sloan Digital Sky Survey mapped the red shifts of both nearby galaxies and distant quasars to create the most complete three dimensional map of the universe.

Researchers with the third Baryon Oscillation Spectroscopic Survey (BOSS) have released the first peek at the largest assembled three-dimensional map of the cosmos. As announced at the APS April Meeting in Anaheim, scientists combined the spectra of over 14,000 quasars to map the location of clouds of hydrogen in the distant universe. The map provides the most complete picture of galaxies forming in the distant past, and could shed light on the nature of dark energy.

“The new thing is that we use it to map the universe in three dimensions,” said Anže Slosar of Brookhaven National Laboratory. “This is the first time we have dense enough regions of quasars…to combine them.”

The team created the map using two different methods. The first is an established technique that looks at the redshifts to determine the recession velocities of galaxies.

To obtain information about the very early universe, right when galaxies were starting to form, the team used a second technique for measuring the spectral lines of quasars. As light passes through interstellar hydrogen, specific wavelengths of light get absorbed and leave a distinct spectral signature.  As light travels through the vast intergalactic distances that separate Earth from the distant quasars, its missing spectral lines shift down to lower energies.

“It’s like looking at the moon through clouds. You can see the shapes of the clouds by the moonlight that they block,” Slosar said.

When the light from the quasar is broken into its constituent wavelengths, hydrogen absorption lines appear throughout the low energy wavelengths. Each line corresponds to a cloud of hydrogen between Earth and the original quasar. The researchers can determine how far away the cloud is by looking at how red-shifted each spectral line is.

Each quasar offers essentially a one-dimensional map of the hydrogen in the universe. When data from the 14,000 quasars in the survey are combined, the shape of the distant universe begins to emerge. Slosar compared the quasar’s light to ice cores taken in Antarctica and how many thin cross sections can combine to form a three dimensional picture. Up to now, galaxies have generally been used to map spectral lines, but quasars have proved ideal because of their luminosity.

The team took their data at the Sloan Telescope at Apache Point Observatory in New Mexico. The telescope they used offers a unique opportunity to map the night sky because of its wide field of view.

To measure the spectral lines, the team blocked out much of the night sky with flat aluminum plates the size of a coffee table. At precise points, corresponding to where in the sky they were looking, the team drilled small holes in the plates to let in the light of known quasars. They plugged in optical fibers into these holes, and ran the light  through a diffraction grating to get the quasar’s spectra. Each exposure involved about one thousand targets, and even with the telescope’s wide field of view, thousands of exposures were used to assemble the map.

“We’re mapping out a million and a half galaxies between us and out a couple billion light years,” said David Schlegel of Berkeley National Labs and principal investigator on BOSS.

Slosar said that this preliminary result using data from the first year of BOSS’s five-year run demonstrated a proof of concept, and the team plans to continue to study as many as 160,000 quasars to put together a more complete map of the universe.

Already the information is leading to insights about how matter first formed in the primordial universe. Matter like stars, galaxies and quasars first clumped together in areas of higher densities left over from when the universe was a mass of hot matter. Vibrations in the hot primordial soup of the cosmos created denser regions of matter that formed galaxies and quasars when they cooled. By looking at the patterns of where galaxies formed, BOSS’s map can help researchers better understand the oscillations of matter only a few thousand years after the Big Bang.

There’s a large gap in the survey’s ability to map the distant, ancient universe. Nearby galaxies up to about seven billion light years away are easily observed using established methods to measure their red shifts. Starting a little bit more than ten billion light years away, BOSS is able to start taking the red-shifted data from distant quasars.

“This technology does not work [for] low red-shifts,” Slosar said.

The researchers hope that the next generation survey, BigBOSS, can fill in some of the missing sections on the map. They hope to further study the expansion of the universe, especially around five to six billion years ago when it’s believed the mysterious dark energy first started to manifest itself.

“The problem with BOSS is it doesn’t map enough. It’s only mapping out some fraction of the way across the universe and that happens to be less than one percent of the volume of the visible universe,” Schlegel said. “We can learn more the more we map so the goal is really to map as much of that volume that we can, and that’s what we’re designing this BigBOSS project for.”