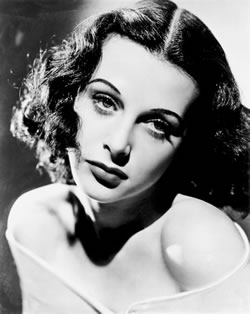 Fans of classic film know the name Hedy Lamarr for her memorable performances in Algiers, H.M. Pulham Esq., and Ziegfeld Girl, among others. But the actress also made a small contribution to wartime technology with her co-invention of an early form of spread spectrum communication technology, in which a noise-like signal is transmitted on a much-larger bandwidth than the frequency of the original information. It is a staple today in modern wireless communications.

Born in November 1914 as Hedwig Eva Maria Kiesler in Vienna, Austria, Lamarr studied ballet and piano as a child and attending a famed acting school in Berlin headed by director Max Reinhardt. She dropped out of school to be Reinhardt’s production assistant and had bit parts in two films before starring in a Czech film called Ecstasy–shocking for the era because Lamarr appeared nude on screen.

Lamarr leveraged her beauty and notoriety into marriage just before she turned 20, to a man 30 years her senior: Friedrich Mandl, an arms merchant based in Vienna who sold munitions and manufactured military aircraft. Mandl forbade her to continue acting. Instead, Lamarr presided over her husband’s lavish parties, attended by Hitler and Mussolini among others, and was often present at his business meetings. As a result, despite her lack of formal education, Lamarr acquired a great deal of knowledge about military technology, most notably guided torpedoes and the vulnerability of radio-controlled weapons to jamming and interference.

Disillusioned with married life–especially her husband’s controlling behavior and dealings with Nazi industrialists–Lamarr disguised herself as one of her maids and escaped to Paris in 1937, where she obtained a divorce from Mandl. (She would marry five more times before giving up on the institution.) After she met Louis B. Mayer in London, he signed her to MGM as Hedy Lamarr. In a town filled with stunning women, Lamarr stood out. Actor George Sanders once said that she was “so beautiful that everybody would stop talking when she came into a room.”

But Lamarr was more than just a pretty face: she had a natural mathematical ability and lifelong love of tinkering with ideas for inventions. One of those ideas bore fruit when she met her Hollywood neighbor, avant garde composer George Antheil, in the summer of 1940.

Born in New Jersey to Prussian emigrants, Antheil studied music in Philadelphia and toured Europe as a concert pianist, before turning his hand to composing. His signature piece was called “Ballet Mécanique,” a complicated score originally written for Fernand Léger’s 1924 abstract film of the same name. It called for mechanically synchronizing sixteen player pianos, as well as xylophones and percussion. He returned to the US in 1933 to compose for film, and also became a syndicated advice columnist and author of a book about romance and endocrinology.

Legend has it that Lamarr approached him for endocrinological advice, but the two soon began chatting about weapons, particularly radio-controlled torpedoes and how to protect them from jamming or interference. She realized that “we’re talking and changing frequencies” all the time, and that a constantly changing frequency is much harder to jam.

This became the basis for their design for a torpedo guidance system. Lamarr contributed the idea of frequency hopping, while Antheil drew on his experience with “Ballet Mécanique” and the sixteen player pianos to devise a means of synchronizing the rapidly changing radio frequencies envisioned by Lamarr. Their joint invention used a mechanism similar to piano player rolls to synchronize the changes between the 88 frequencies–not coincidentally, this is also the standard number of piano keys–and called for a high-altitude observation plane to steer a radio-controlled torpedo from above. They submitted their patent on June 10, 1941, and the patent was granted on August 11, 1942. Lamarr was listed under “Hedy Kiesler Markey,” her married name at the time.

It was not an entirely new concept. Nikola Tesla alluded to frequency hopping in 1900 and 1903 patents. A similar patent for a “secrecy communications system” was granted in 1920, with additional patents granted in 1939 and 1940 to two German engineers. And evidence came to light in the 1980s that during World War II, the US Army Signal Corps worked on a communication system that used the spread spectrum concept as well.

Lamarr and Antheil had less success convincing others their idea was feasible. The US Navy felt the clockwork mechanism was too bulky and unreliable to use with a torpedo. It wasn’t until 1957 that engineers at Sylvania Electronic Systems Division adopted the concept, using the recently invented transistor for an electronic system.

Antheil died in 1959. As for Lamarr, she went on to make more than 20 more films, most famously Cecil B. de Mille’s 1949 Samson and Delilah. Lamarr has a star on Hollywood’s Walk of Fame in honor of her film career, but she took particular satisfaction in being awarded the Electronic Frontier Foundation Award in 1998, more than 50 years after she and Antheil received their patent.

Lamarr died on January 19, 2000, in her Florida home. She will likely always be remembered more for her spectacular beauty than for her technological contributions, which are usually treated as an intriguing footnote. “My face has been my misfortune,” she once observed, describing it as “a mask I cannot remove. I must live with it. I curse it.”