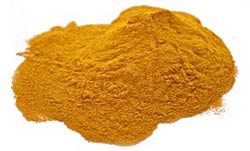 Curcumin, an ingredient used in the spice turmeric, which is used in curries.

At this year’s March Meeting, physicists presented new and unorthodox projects that are designed to help detect concealed threats. One researcher developed a way to use the optical properties of a curry powder ingredient to detect explosives, while another has been working on a way to use lasers to take air samples from kilometers away.

Though it sounds fantastic, Abhishek Kumar from the University of Massachusetts, Lowell found a way that curcumin, an ingredient used in the spice turmeric, can be made to detect the presence of TNT.

“Curry powder can detect explosives,” Kumar said. “We can predict in a few seconds the presence of DNT, TNT or other explosive substances.”

When curcumin is exposed to intense light, it fluoresces a bright green color, a property that researchers have turned into a bomb detector. Kumar and his collaborators Mukesh Pandey and Jayant Kumar mixed curcumin with the chemical novozym-435 so that the two substances bonded to form one long molecule. When traces of explosives come near it, they bond together with the end of the novozym, causing in turn the fluorescence of the curcumin to quench and dim.

The device Kumar is working on takes this compound and spreads it over a film. The film is waved in an area for a few seconds where an explosive might be present. If there are any stray molecules from the explosive floating in air, they will bond to the compound, quenching the fluorescence. After being exposed to light the sample is observed to see if it darkens.

“Once you expose this film to TNT vapor, you don’t see anything. The fluorescence is quenched,” Kumar said. “This could be very specific as well as sensitive.”

Already Kumar and his team have been conducting some field tests and are talking with two companies about commercializing the technology. So far the curcumin is highly effective in saturated environments, darkening by as much as 90 percent. They’re right now working on ways to improve the sensitivity of the detector in environments less saturated with explosive vapor. Kumar said that once the device is finished, it would be well-suited for detecting hidden explosives and buried landmines.

Finding dangerous substances from far away is the focus of the work of Andrew Traverso, a graduate student at Texas A & M. He proposes using the atmosphere to create a “backwards propagating laser in the sky” to look for the spectral signature of WMDs.

“We’d like to detect minute particles in the upper atmosphere kilometers away without sending an airplane up there, and we’d like to do it using lasers,” Traverso said.

Using high-powered lasers and precision timing, Traverso says that his team could turn a distant point of the atmosphere into a lasing medium. He proposes firing two laser pulses into the sky along the same path. The second pulse would have a longer wavelength than the first, meaning that it travels slightly faster in the atmosphere and gradually overtakes the first pulse. The nitrogen or oxygen atoms in the atmosphere get excited where the two pulses meet, sending a laser-like pulse back down the path of the first two pulses.

To take the spectrographic data, a third pulse would be fired from the ground, intersecting the backwards beam. The region where these two beams meet would excite the atoms in the atmosphere, allowing for stimulated Raman spectroscopy of that point. With precision timing the third beam from the ground and the backward-traveling beam can be made to intersect at any altitude.

“We’ve shown the viability of using the atmosphere as a remote laser,” Traverso said. “We’re working to perfect the spectroscopy at the moment.”

The team is still developing their techniques. So far they have  built a tabletop version of the system, which has demonstrated the proof of concept. Running field tests likely poses logistical problems, because the Air Force is restrictive about giving out permission to fire high-powered lasers into the air.