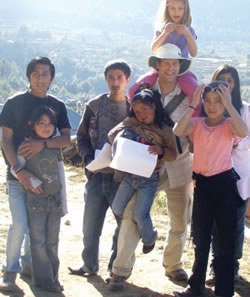 Pete Schwartz poses with his daughter Tekuru on his shoulders and several children from San Pablo, Guatemala.

Pete Schwartz has undergone a transformation. When he started his research as a faculty member at Cal Poly San Luis Obispo in the early 2000s, he built on cutting-edge nanotechnology, growing decane thiol monolayers and studying meniscus force nanografting. Today he is much more likely to use a ball-peen hammer than an electron microscope now that he’s devoted himself to creating sustainable technology for the developing world.

“Right now I have students working on a low-cost solar concentrator that could be used to cook in developing countries,” Schwartz said.

Schwartz said that his perspective began to change around 2005 when he started doing work on his house. He had always felt strongly that people needed to make better decisions about energy and resources, and saw this as the opportunity to put it into practice for himself. He went about greening his home, pulling out the irrigation systems and instead installing a solar shower in his back yard whose runoff flows into his garden. He made other changes to the house, like installing energy efficient windows and replacing his standard toilets with biodegrading pit toilets.

“In the process I realized I was more excited about these scientific explorations than what was going on in the lab,” Schwartz said, “I could see the results…It was simple, it was something I could grab onto, but the scientific process was still complete.”

When speaking at the “Physics of Sustainable Energy” conference at the University of California, Berkeley in early March, he illustrated his thought process as he shifted from nanotechnology to sustainable-energy research. He began by showing a series of photos of splashing and flowing water. Films of liquid flowed off an obscured surface, undulating and spraying everywhere. He talked about the fluid dynamics of the forming ripples, complete with overlaid force diagrams and equations. The final slide pulled back and the audience could see that the water had been flowing off a smiling infant, bathing in a sink.

“The human being is the most interesting physical system,” Schwartz said.

He took a sabbatical in 2006 and 2007 with Dan Kammen and the Energy and Resources Group at UC Berkeley. There he studied everything he could about sustainable energy. He participated in studies of California’s low carbon fuel standards, wind energy potential off the coast of Santa Barbara, and electric car costs.

“It forced me to deeply investigate every different kind of renewable and conventional energy being used,” Schwartz said.

One area that he looked at was how energy consumption affects quality of life around the world. The United Nation’s Human Development Index weighs the personal wealth, education and health of a population to quantify how “well off” a nation is. The higher the HDI number, the better off a nation is. In his talk, Schwartz highlighted a graph of the world’s HDI numbers against energy usage per capita. The results are dramatic: the more energy a nation uses, the “better off” its population is. Most of the world’s population is poor and uses a small fraction of the energy used by the developed industrialized nations. As poorer nations develop, they’ll likely start using exponentially more energy, and generating correspondingly more greenhouse gases.

“This is just a hopeless situation,” Schwartz said. “Can we help them develop carbon-free?”

This question drove him toward finding ways to develop renewable energy solutions cheaply and easily. He began teaching a course at Cal Poly, Appropriate Technology for the World’s People, which had students create technologies for developing nations that are easy to build, cheap and environmentally friendly.

Part of the curriculum is to learn from past projects that have either failed or caused unforeseen consequences. On one trip to Nicaragua in the summer of 2009, while conferencing with nonprofits and other nongovernmental organizations, Pete met a researcher named Luz Marina Delgado who had been teaching a similar course at Caltech. The two became friends and Schwartz and Delgado set out on a three week tour of Delgado’s native Guatemala in 2010.

Schwartz said that much of Guatemala he visited was “chaotic,” and the towns often had streets filled with trash and feral dogs. During his travels, however, he came across one village that was different. Called San Pablo, it lay close to the Mexican border. Schwartz described it as a “bastion of progressive, very enlightened thinking.” There were no feral dogs or trash. Though it was primarily a subsistence agricultural town, students went to school six days a week because people there put such a premium on education.

The town was poor, so residents had improvised a number of solutions in place of technology they couldn’t afford. One local had run PVC pipes across his roof to heat his water, while others use natural adobe for insulation. Schwartz saw a golden opportunity to have his students from Cal Poly come to Guatemala and learn about green solutions by helping the local community develop their natural and renewable resources.

To lay the groundwork for his “Guateca” program, in December of 2010 Schwartz led a team of twelve Cal Poly students to San Pablo to start building a relationship between the town and the university. The group took a survey of the town, asking people questions about year-round living conditions, energy usage, diets and education. Already students at Cal Poly had been developing inexpensive technologies using recycled and renewable materials, investigating everything from harnessing streams for “micro hydro” electricity production, house insulation from recycled bottles and prototype electricity-less refrigerators.

In the coming summer, students will travel to San Pablo and put the technologies to use. Schwartz sees it as a teaching opportunity for his students to learn by doing while at the same time benefiting the local community.

“If you want to help people, you’ve got to go be with people,” Schwartz said.

The program is more involved than just installing these renewable technologies in the village. Students will work with the local residents to set up a local enterprise with the technology they develop that will continue after the students leave.

The heart of Schwartz’s plan is a summer school he intends to establish in San Pablo for both US and Guatemalan students. There, residents and students would work together and combine what they’ve learned about business and technology so that the enterprises they’ve started will last. Schwartz hopes that San Pablo residents will integrate the green technologies into their lives and work.

“We’re not going to fix anything,” Schwartz said. “It’s not something you can just fix. We can benefit from learning from them and in the process understanding their situation better.”

Schwartz knows that his plan is ambitious. He said that so far the administration at Cal Poly has been supportive, but there are still many unknowns about the project he’s taking on. However he’s staying optimistic about the program. Already one of his teaching assistants has headed down to Guatemala to start an English language program for the residents.

“We have confidence in our intent to work through what happens,” Schwartz said. “If you apply things with a benevolent curiosity and hard work, technical achievements follow.”