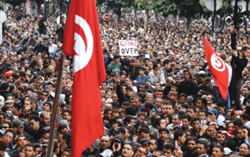 What happened in Tunisia on January 14th 2011 is no doubt a major event in the history of a century that started with another milestone, the tragedy of September 11th 2001. After a decade under the sign of terror and war, the flavor of Jasmine is bringing to the world a breeze of freshness and optimism.

By its purpose, dynamics, first results and ongoing consequences, it makes sense to compare the Jasmine revolution to the fall of the Berlin wall. Indeed, while these lines are being written, the news on the Internet reports on Chinese opposition leaders who are taking the Jasmine revolution as an example for bringing about democracy in China, inspired by the role that new technologies and social networks played in Tunisia.  Obviously, the perfume of Jasmine, this beautiful and delicate white flower typical of Tunisia, is diffusing across the world.

When looking to the repercussions of the Jasmine revolution, first in the neighboring countries of the Middle East region, where the Egyptian people succeeded to drive out Hosni Mubarak, and where dramatic events are currently underway in Libya, Algeria, Yemen and Bahrain, any physicist can find in this dynamics a striking illustration of the famous “butterfly effect.” Indeed, the whole story started with a rather banal incident: on December 17th 2010, a policewoman slapped Mohamed Bouazizi, a young jobless man who was trying hard to sell some fruit and vegetables in the market of a poor city in the center of Tunisia called Sidi Bouzid.

For Mohamed, valiant heir of a people whose 3000 years of history include such icons as Hannibal, who crossed the Alps using elephants, Saint Augustine, Ibn Khaldoun and other geniuses, this humiliation was too much. Mohamed Bouazizi immolated himself in front of the official representatives of the government. By this act, he became the first martyr and the symbol of the revolution and freedom. His message was received one hundred percent by the people of Sidi Bouzid : No dignity means no life. A spontaneous, popular demonstration started to rise up, but immediately faced the oppression of the regime. Indeed, like many other governments in the region, the Tunisian dictatorial regime took advantage of the atmosphere post September 11, with the tacit benediction of the main western democracies, to oppress any protest, even peaceful and civil, branding the protesters as dangerous terrorists.

Actually, all the ingredients for a revolution aiming toward a transition to democracy and the free world were there for many years. The Tunisian people are among the most advanced in North Africa. This small country was the first to abolish slavery (1846), to promulgate a constitution (1861), to introduce modern science in education (1875), to prohibit polygamy (1957), etc. The Tunisian youth are extremely open-minded and in touch with the most advanced communication technologies (more than 25% of the 10 million Tunisians have a Facebook account). A very widely shared feeling is that the Tunisian people deserve to join the free world and become a genuine democracy, and the president, in office for 23 years, became the major obstacle to that legitimate aspiration.

The echo of the Sidi Bouzid events was instantaneously broadcast through the social networks and the protest increased with demonstrations in the other cities of Tunisia (Regueb, Kasserine, Thala, …) where the dictatorial government commanded snipers to kill the peaceful protesters. The videos recorded by the people of Kasserine with their mobile phones and uploaded on the net shocked the nation, whereas the official media continued to deny or minimize these events, or present them as terrorism acts perpetrated by foreign agents.

Despite the speeches of Zine El Abidine Ben Ali, aggressive and pathetic, an implicit, but strong consensus was growing up among the people: The dictator has to go. On Friday January 14th 2011, many tens of thousands demonstrated in Tunis, transforming Habib Bourguiba avenue, named after the first president of Tunisia, to a civilian place de combat against despotism. The few hours of this civilian demonstration were clear enough to force the dictator to leave. I was there and I can testify how impressive this demonstration was, not only by the number of people, but also and mainly by their civility and the very high quality of their behavior and their demands. We were undertaking the first revolution of the 21th century and the conscience of this exceptional event was so great, that a very strange and unique phenomenon happened. A kind of collective effect linked all the demonstrators together, making them take care of each other, support each other and feel that it is a leitmotiv and a national duty to be exemplary.

Moreover, it is interesting that many notices were written in English, with slogans like “Game over”, “Yes we can,” etc (see picture). This is absolutely new because the preceding generation was tightly linked to France and French culture and language. It is no longer the case. Tunisian youth is open to the entire world. It will be great if this message is well taken and well understood by our friends from all over the world.

Afterwards, if one has to take a lesson from the Jasmine revolution, I think that it would be to never despair of humankind, whatever their present status, and wherever they live. For many years, people around the world, including scientists, were convinced that the only way to bring Arab countries to democracy, if any, is the Iraqi example, and it doesn’t matter if the price for that can be tens of thousands of civilians killed. The Tunisian revolution demonstrates with the most striking clarity how much this Machiavellian view is wrong. Tunisians and Arabs are humans on the same footing as others. They are able to emancipate themselves and contribute to the stability and the progress of humankind. All that we need is to be more known and accepted as we are, without any stereotypes or clichés.. Contrary to a widely shared but false idea, democracy in the Arab world is the best guarantee for peace and stability in the Middle East. The transition towards democracy should be strongly supported by the US and other main democracies. We need to learn from your experiences. We want to rely on your friendship, to show you our luminous face, not that dark one portrayed in the media and from which we have all suffered so much. Together, we can go forward through mutual collaboration. Personally, I have the enormous good fortune to have many friends in US and I had the opportunity to visit this fantastic country. But, many of my colleagues, despite the fact that they are conducting very good science, and even those who are retired now, have never had the possibility to collaborate with US scientists, nor to visit America. We deserve more interest, and this is beneficial both for you and for us.

After the Arab countries, the next region in the world that will make its revolution will be Sub-Saharan Africa. To save time, and for the benefit of humankind, we have to avoid the same reefs and help them in taking their future in their own hands. This will be the best testament to the Jasmine revolution.

Mourad Telmini is Professor of Physics, Faculty of Science, University of Tunis El Manar. He is also Director General of the National Centre for Nuclear Science and Technology, and vice-President of the Tunisian Physical Society.