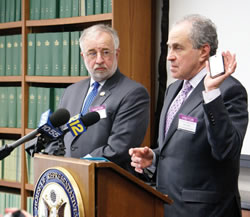 No, APS Director of Public Affairs Michael Lubell is not interrupting the press conference to take a phone call. He is pointing out to the audience the many ways in which fundamental physics research contributed to the smart phone, and how damaging cutting back on physics research could be to the economy. Congressman Tim Bishop, the main speaker at the press conference, looks on at left. In the background, museum-quality bound volumes of the Physical Review grace the shelves at the APS editorial offices in Ridge, NY.

Speaking at a press conference on February 28 at the APS editorial offices in Ridge, NY, Congressman Tim Bishop (D–NY) condemned possible funding cuts to Brookhaven National Laboratory for the rest of the fiscal year. Bishop said that the proposed cuts were “destructive” and would have long-lasting effects on the lab and local community.

As of February 28, no federal budget had been passed for fiscal year 2011, and the government had been running at fiscal year 2010 funding levels. On February 19, the House of Representatives passed a bill, H.R.1, that would fund the government, but cut the budget for the rest of the fiscal year by $61 billion. The Department of Energy’s Office of Science, which runs the national laboratories, would lose $1.1 billion of its $5.1 billion budget in the remaining seven months of the fiscal year. The effects of this 22 percent cut would be especially acute because the entirety of it would be enacted only on the second half of the fiscal year, meaning that the labs would be facing nearly a 40 percent cut during that time.

As APS News goes to press, the budget has not yet been finalized. The Republican-controlled House passed its version, but the Democratic-controlled Senate has so far rejected many of the proposed cuts. The House version does not specify how much each individual lab would stand to lose, but estimates by Brookhaven look at the impact of the cuts were they spread out evenly among all the national labs.

“I think all of us should hope that this budget does not get passed. But if it does, I think it sends a terribly, terribly, depressing message about the commitment that this nation has to remaining on the cutting edge in terms of scientific research,” Bishop said. “Scientists from all over the world come here, they come to our lab, and we’re saying ‘you know what, stay away,’ we’re saying, ‘stay in Switzerland, go to France,’ that’s what we’re saying and I think that’s a terrible message to put out there. It’s also a terrible message to send to the college senior who’s a physics major, who maybe contemplating a PhD program, and we’re going to say ‘you know what, we don’t have places where you can go to pursue your research’.”

Bishop spent much of his time calling attention to the local impact that the possible budget cuts would have on the town of Brookhaven, whose economy relies heavily on the lab. According to budget estimates by the lab, about 950 workers employed at the lab would be laid off. On top of that the National Synchrotron Light Source and the Relativistic Heavy Ion Collider would have to be shuttered and work halted on the NSLS-2 due to lack of funding, affecting thousands more visiting scientists and construction workers.

The impact on scientific research would not be limited to Brookhaven, but would have a similarly deleterious effect at almost all federally funded research centers.

“What is happening, or would happen, at Brookhaven will happen across the country,” said Mike Lubell, the APS director of public affairs. “H.R. 1 would affect 26,000 scientists and engineers nationwide. It would cause the loss of jobs at each laboratory. As the congressman pointed out, at Brookhaven there are roughly 1,000 people on staff. The same thing would be replicated of course at each national laboratory; Oakridge National laboratory, Argonne National Laboratory and Femilab in Illinois, the California labs, SLAC and Berkeley.”

It is unclear how long science programs like the NSLS and RHIC might be shuttered. The President’s proposed budget for 2012 includes increases to federal research. However, researchers at the lab say that even a temporary shutdown would have lasting effects on the labs.

“Essentially our research stops,” said Tony Lanzirotti, a researcher from the University of Chicago whose research uses the National Synchrotron Light Source, “[The researchers] are all very highly skilled people, they’re going to go out and they’re going to find other opportunities, and getting them to come back to Long Island, back to Brookhaven if they have to leave, is not something that’s going to be easy to do.”

Speakers at the press conference highlighted also how basic research contributes to new technology and industries. At one point Lubell held up his iPhone, saying that without federally supported research, the technology needed to build the device wouldn’t exist.

“This isn’t just a sand box, this isn’t somebody’s pork barrel, this is the future of the country, and you can see it,” said Peter Stephens, a professor in the physics and astronomy department at Stony Brook University.

APS has been actively involved in communicating the importance of the national labs throughout the budget process. APS has sponsored meetings on Capitol Hill with legislators, sent out alerts to all its members who reside in the US, helped organize a taskforce on American innovation, written numerous op-ed articles, and contributed to other media campaigns.