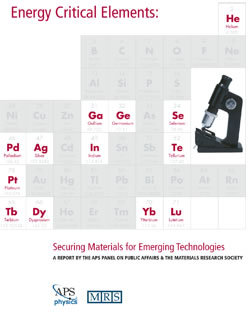 A number of chemical elements that were once laboratory curiosities now figure prominently in new technologies like wind turbines, solar energy collectors, and electric cars. If widely deployed, such inventions have the capacity to transform the way we produce, transmit, store, or conserve energy. To meet US energy needs and reduce dependence on fossil fuels, novel energy systems must be scaled from laboratory, to demonstration, to widespread deployment.

Energy-related systems are typically materials intensive. If widely deployed, the elements required by these technologies will be needed in significant quantities. However, many of these unfamiliar elements are not presently mined, refined, or traded in large quantities, and as a result their availability may be constrained by many complex factors. A shortage of these “energy-critical elements” (ECEs) could significantly inhibit the adoption of otherwise game-changing energy technologies. This in turn would limit the competitiveness of US industries and the domestic scientific enterprise.

Although they are essential to our culture and economy, the availability of traditional mineral materials is rarely an issue because they come from many sources and are the focus of well-established, relatively stable markets. Recently there have been several efforts (1,2,3,4) to identify critical minerals that are both essential to our economy and subject to supply restrictions.

A newly released report by the American Physical Society and the Materials Research Society (5) focuses specifically on ECEs and on the challenges posed by rapidly increasing demand. It recommends a coordinated set of government actions to facilitate smooth and rapid deployment of desirable technologies. The APS/MRS report focuses on identifying commonalities and addressing potential constraints on ECEs rather than on constructing a definitive list of ECEs, which will doubtless change with time as technologies, supply lines, and risk factors change. Although today’s list of ECEs would likely include most of the rare earth elements (REEs) along with gallium, germanium, helium, indium, platinum, rhenium, selenium, tellurium, and perhaps cobalt, lithium and silver, a definitive list of ECEs would require extensive study based on information about occurrences, reserves, extraction, processing, utilization, and recycling, much of which is not yet available.

An element may be “energy-critical” for a variety of reasons. It may be intrinsically rare in Earth’s crust, or poorly concentrated by natural processes, or currently unavailable in the US  Some potential ECEs, such as tellurium and rhenium, are genuinely rare in Earth’s crust (6). Others like indium are unevenly distributed, making the US highly reliant on imports. Still other ECEs, like germanium, are seldom found in concentrations that allow for economic extraction.

Geopolitical issues may arise when a critical element is produced in a small number of countries or in a location subject to political instability. The present concentration of REE production in China is a particularly pertinent example. Although the US led the world in both production and expertise into the 1990s, over 95% of these important elements are now produced in China, which is rapidly becoming the center for REE extraction and processing expertise, putting the US and other REE importers at a further disadvantage.

Many potential ECEs are not found in concentrations high enough to warrant extraction as a primary product given today’s prices. Instead, they are obtained primarily as byproducts during the extraction of other primary ores. For example, tellurium and indium are currently obtained as by-products of the electrolytic processing of copper and zinc ores, respectively. By-production and co-production present special economic issues. For example, it is unlikely that the mining of copper (production value ~$80 billion in 2009) would be driven by an increased demand for tellurium (production value ~$30 million in 2009).

Several additional factors complicate the availability of ECEs. Some are toxic; others are now obtained in ways that produce environmental damage unacceptable in most countries. Discovery of new mineral deposits typically takes several years and the time between discovery and start-up of a new mine averages five to ten years (7). For some elements, large-scale production may require development of new processing technologies, another time-consuming activity. As a result, the lag time between increased demand and the availability of new supplies may be extensive. Recycling, and the existence of secondary markets, is quite variable. For example, recycling is highly developed for platinum, but almost non-existent for most other ECEs. Sometimes one element can be substituted for another in a technology, but more often than not, substitution requires significant redesign, reengineering, and recertification with attendant delays. The APS/MRS study stresses, however, that with the exception of helium, there does not appear to be any fundamental limit on the availability of any element for energy technologies in the foreseeable future. The problems lie in short-term interruptions or constraints on supplies.

To deal with the multifaceted issue of ECE availability the APS/MRS report makes the following recommendations for US federal action.

Information Collection and Analysis
Collecting and evaluating data required to track the availability and uses of chemical elements is a complex undertaking. While some data are already collected by a number of federal agencies, there is no central entity for tracking minerals and processed materials over their life-cycle. The Report recommends that the government should gather, analyze, and disseminate information on ECEs across the life-cycle supply chain including discovered and potential resources, production, use, trade, disposal, and recycling. The entity undertaking this task should be a “Principal Statistical Agency”, a designation that would enable it to require compliance with requests for information.

In addition the Report urges the federal government to regularly survey emerging energy technologies and the supply chain for elements throughout the periodic table, with the aim of identifying critical applications as well as potential shortfalls.

Research and Development
A focused federal research and development program would enable the US to expand the availability of and reduce its dependence on energy critical elements. R&D to expand the availability of energy critical elements should include the geology and geochemistry of mineral deposits as well as metallurgy and minerals processing technologies. Research on substitutional chemistry and material science and the technology of recycling can also help reduce the dependence on ECEs. Substitutions for ECEs may involve several other materials or sweeping redesign, reengineering, and recertification. General Electric’s 2006 redesign of high performance turbine alloys in anticipation of a projected shortage of rhenium (8) provides a pertinent example. Few companies have resources to undertake a project of this scope; thus research of this type would be greatly aided by federal funding.

R&D on recycling could also reduce dependence on ECEs. Since most products that use ECEs currently have little recycling capability, significant quantities of ECEs are permanently discarded every year. Research on product designs that are more suited to recycling could help ensure that scarce elements are more easily recovered from discarded products. Research in chemical, metallurgical, and environmental science and engineering, and industrial design methods, can create high-value reusable ECE materials.

The APS/MRS report recommends that the federal government establish a research and development effort focused on ECEs and possible substitutes that can enhance vital aspects of the supply chain including: geological deposit modeling, mineral extraction and processing, material characterization and substitution, utilization, manufacturing, recycling, and lifecycle analysis. Such a research program would have the added advantage of enhancing the training of undergraduate, graduate, and postdoctoral students in disciplines essential to maintaining US expertise in ECEs.

Success in this kind of research requires collaboration among scientists, engineers, and manufacturers across a range of fields. Within the US this breadth of expertise exists only at some national laboratories and major research universities. Consortia built around such institutions could bring the depth of knowledge and continuity of focus required. Such centers should engage and assist efforts by smaller groups in academia and industry.

Efficient Use of Materials
The APS/MRS report urges greater attention to material efficiency with the aim of producing necessary goods from as little primary material as possible. Recycling is a major, but not the sole, component of efficient material use. Other aspects include improved extraction technology, reduced concentration in applications, replacement in non-critical applications, development of substitutes in critical applications, and life-style adaptations. Several of these approaches fall under the R&D heading discussed earlier.

In addition, the APS/MRS report urges that the federal government establish a consumer-oriented “Critical Materials” designation for ECE-related products. The certification requirements should include the choice of materials that minimize concerns related to scarcity and toxicity, the ease of disassembly, the availability of appropriate recycling technology, and the potential for functional as opposed to non-functional recycling. Also steps should be taken to improve rates of post-consumer collection of industrial and consumer products containing ECEs, beginning with an examination of the numerous methods being explored and implemented in various states and countries.

Market Interventions
With the exception of helium, the APS/MRS report does not advocate government interventions in markets beyond those implicit in their other recommendations concerning research and development, information gathering and analysis, and recycling. In particular, the report does not recommend non-defense-related economic stockpiles. Industrial users of ECEs are best able to evaluate the supply risks they face and purchase their own “insurance” against supply disruptions caused by either physical unavailability or price fluctuations.  Non-defense government stockpiles of critical minerals have had unintended, disruptive effects on markets (2,9).

The single exception noted by the APS/MRS report concerns helium, which is unique even among energy-critical elements because it is permanently lost to the atmosphere if not captured during natural gas extraction. Helium has unique properties:  it remains liquid at 0K; it cannot be made radioactive; it has the highest specific heat capacity of any gas except hydrogen. Helium is critical for current energy R&D and it is anticipated that it will be increasingly in demand in the future for technologies not yet developed. The Report recommends that measures should be adopted to conserve and enhance the nation’s helium reserves.

Federal Coordination
ECE availability is a complex topic that straddles the domains of a number of federal agencies including the Departments of Commerce, Defense, Energy, Homeland Security, Interior, State, and Transportation, the Environmental Protection Agency, the National Science Foundation, and the Office of the US Trade Representative. The capacity to orchestrate a productive collaboration between these agencies and coordinate their efforts with the Office of Management and Budget lies in the Executive Office of Science and Technology Policy (OSTP).

The Report recommends that OSTP create a subcommittee within the National Science and Technology Council to examine the production and use of ECEs within the US and to coordinate federal actions.

The authors of this article all served on the committee that drafted the Energy-Critical Elements Report. Robert Jaffe, chair of the committee, is at MIT; Jonathan Price, co-chair, is at the University of Nevada, Reno; Murray Hitzman is at the Colorado School of Mines; and Francis Slakey is APS Associate Director of Public Affairs and an adjunct professor at Georgetown University.