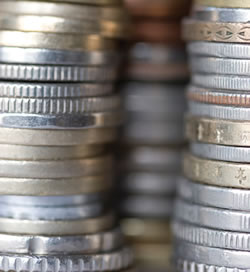 Sir Isaac Newton’s stellar scientific accomplishments are well-known: his Principia and Opticks laid the foundation for modern physics. Less frequently discussed are his later years, starting with his acceptance in 1696 of the position of warden for the Royal Mint. During his tenure, he oversaw the recoinage of England’s currency, and relentlessly pursued counterfeiters, including one of the most successful: William Chaloner.

This was a period when hand-struck silver coins minted before 1662 were often “clipped” around the edges for silver shavings, reducing their weight, and hence their value as legal tender, especially in foreign countries. Since the value of the silver was greater than the currency itself, it also presented a strong temptation for melting down the coins and selling them abroad, giving rise to an arbitrage market.

Coins produced in later mintings had milled edges to prevent clipping, but this merely fostered a thriving counterfeit black market. The most common counterfeiting methods were casting coins out of fake molds, and stamping them from counterfeit dies. Newton estimated that as many as 20% of the coins collected during the great recoinage were counterfeit. It was a crime punishable by death since it was considered to be high treason: convicted counterfeiters were hanged, drawn and quartered.

The son of a weaver in Warwickshire, Chaloner was born in the mid-1650s. He proved to be trouble from the start. His frustrated parents couldn’t control him, and eventually apprenticed him to a nailmaker in the town of Birmingham. As it happened, the city also had a thriving counterfeit coining industry. Chaloner proved a quick study, and soon became an expert in forging groats (about four pennies).

He had larger ambitions, however, and migrated to London in the 1680s, intending to find honest work. The Craftsmen’s Guild system that dominated London at that time prevented him from doing so, and he found himself peddling fake tin watches instead. Chaloner next tried his hand at being a soothsayer and “doctor,” catering to lovelorn women and those looking to recover stolen property. He was successful enough at the latter to marry and set up a fairly respectable household, fathering several children. But it seems his knack for finding stolen items stemmed from the fact that he committed the robberies in the first place. Once this proclivity came to light, he was forced to flee his home.

Chaloner first appeared in the public record in 1690, arrested for burglary. By then he was working as a japanner, acquiring skills in gilding to further his counterfeiting career. Soon he was a member of one of the many coining groups working out of London at the time. A goldsmith named Patrick Coffey taught Chaloner the finer points of molding milled edges, and he partnered with a master engraver and printer named Thomas Taylor, who made the dies. Once the counterfeit coins had been minted–usually guineas or French pistoles–another conspirator named Thomas Holloway, with the help of his wife, passed the coins to local crooks, who put them into circulation.

By all accounts, Chaloner was highly skilled and successful as a counterfeiter, purchasing a large house in Knightsbridge, hiring a carriage, and donning all the outward trappings of a respectable gentleman. He was “the most accomplished counterfeiter in the kingdom… so nice an artist of dies that it galled him to spoil their perfection by use,” wrote Sir John Craig in Newton at the Mint (1946). In this guise, he offered his services to the Royal Mint to inspect their coining processes and advise the Mint on how to better combat counterfeiting–gaining valuable insider information on their methods in the process, the better to forge his own coins. It was a brazen scheme that fortunately failed.

Chaloner might yet have escaped punishment for his crimes had it not been for Newton, who took his role with the Royal Mint very seriously. Newton prowled the bars and taverns in the seedier sections of London in disguise, gathering evidence against those engaged in counterfeiting. He became a justice of the peace so that he could personally conduct more than 100 cross examinations of witnesses and suspects, successfully prosecuting 28 such criminals.

Newton first arrested Chaloner for counterfeiting in September 1697 and confined him to Newgate Prison, but Chaloner called on his high-ranking cohorts to win an acquittal, and he was released. Undeterred, Newton set about building an airtight case against Chaloner. A year and a half later, Newton arrested him again, having collected far more damning evidence based on the testimony of eight key witnesses, several of whom were former partners in crime. There were two indictments: one for coining French pistoles in 1692, and another for forging crowns in 1698. Always wily, Chaloner first pretended to be mad, and then, during his trial, accused the assembled witnesses of lying to avoid being prosecuted too.

Chaloner’s arguments were for naught: the jury convicted him of high treason after only a few minutes’ deliberation, and he was sentenced the following day by the presiding judge, Sir Salathiel Lovell for execution two weeks hence. During that time, he wrote to Newton several times, alternately accusing him and begging for leniency. “I shall be murdered unless you save me. O I hope God will move your heart with mercy pitty to do this thing for me,” he lamented in his final letter, but the scientist was unmoved. On March 16, 1699, Chaloner was hanged.

As for Newton, he became president of the Royal Society in 1703, and was knighted by Queen Anne in 1705, the second scientist to be so honored, following Sir Francis Bacon. A lifelong bachelor, he became increasingly eccentric in later life, possibly due to mercury poisoning stemming from his investigations into alchemy. He died in his sleep in London on March 31, 1727, and was buried in Westminster Abbey.