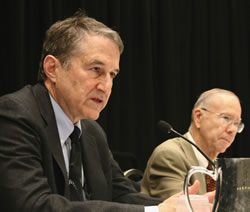 Robert Jaffe ( left) answers a question about energy-critical elements at a press conference held Feb. 18 as part of the AAAS annual meeting in Washington, DC. Another member of the report committee,Thomas E. Graedel of Yale (right), also answered questions at the conference.

The US government needs to do more to secure supply lines of uncommon elements critical to the nation’s future energy technologies, according to a new study, which highlighted elements that are not currently produced in large quantities, but play major roles in emerging energy production and transmission technology. The report, Energy Critical Elements: Securing Materials for Emerging Technologies was conducted by APS’s Panel on Public Affairs and the Materials Research Society’s Government Affairs Committee. The report was accepted by the APS Executive Board at its meeting in early February.

“We’re trying to adapt to a world where energy independence is an increasingly important political concern. Getting away from fossil fuels and carbon use is another strong priority. The technology that has been developed to lead us away from these dependencies relies on these unusual chemical elements,” said Robert Jaffe, a physicist at MIT and chair of the committee that wrote the report.

The report recommended that the federal government, spearheaded by the Office of Science and Technology Policy, do more to collect and disseminate information on the supply chain of hard-to-acquire “energy critical elements” and support more research into their production and reprocessing. The report said also, however, that, except for helium, it was not economically practicable to maintain stockpiles of energy critical elements. The report reiterated APS’s 1995 Helium Statement which recommended that the United States, along with other countries, maintain a helium reserve.

Most of the recommendations in the report are slated to be part of a bill introduced by Sen. Mark Udall (D-Colo.). As APS News goes to press, the bill has not yet been introduced, but is likely to be proposed by the last week of February. Previous bills have addressed energy critical elements, but these new recommendations emphasize information sharing, research and recycling, rather than past approaches like mining and stockpiling.

“We really feel that this is not a partisan issue. The main recommendations don’t bear the label of being either liberal or conservative. They typically deal with well established roles of the government like gathering and disseminating information,” Jaffe said, adding also that all of the proposals are budget neutral and would not cost the federal government additional money.

Jaffe said that there’s no single easy way to address the issues facing the supply of these energy critical elements, and a wide range of efforts is needed. “This is a very high level, strongly coupled set of problems that require an effort that goes across many different disciplines in both the public and private sector,” Jaffe said. “The lifecycle of these materials is very complex and it touches on many aspects of our economy.”

All together the study identified 29 elements critical to emerging energy technologies that are rare, difficult to mine or unavailable in the United States. Examples of such elements are indium, tellurium and germanium, all of which are important to the manufacturing of photovoltaic cells. Unfortunately, there are several problems with the supply lines for these elements. Tellurium is quite rare in Earth’s crust, and is only produced as a byproduct of the refinement of copper and zinc ores. Sources of indium, though less rare, are found mostly outside of the United States, causing domestic industries to rely heavily on imports. Germanium is less rare than silver, but there are no geologic processes that concentrate the element into veins that can be mined economically.

“You’re going to need vast amounts of these materials,” Jaffe said, “There’s a huge mismatch in what is going to be needed and what is being produced.”

The study group came up with several suggestions to better secure supplies of these energy critical elements. For elements such as tellurium, gallium and indium, which are the byproducts of the refinement of more profitable metals, greater effort can be made to save the energy critical elements that are co-produced. Only a small fraction of the tellurium created by the refinement of copper is retained, and the report recommends finding an economic incentive for copper producers to save more of the element.

The report also says that a better job could be done recycling energy critical elements. Almost none of the selenium, also used in photovoltaic cells, is recycled. However it highlighted lithium, a critical ingredient to rechargeable batteries, as a possible model for more recycling. The report notes that while the amount of lithium currently being recycled is small, it has been growing because of greater demand for lithium-ion batteries.

Lithium is also an element possibly susceptible to geopolitical forces. Right now worldwide lithium production is dominated by three South American countries, Chile, Bolivia and Argentina. The report states that while importing critical elements is not inherently risky, supply lines are more easily jeopardized when limited to a small number of sources. There is a firm in the United States investigating possible refinement from the mineral hectorite, but production has not yet begun.

The report singled out helium as a unique element. It has many uses in cryogenics and because of its chemical and nuclear inertness it is critical for many nuclear reactor designs. The authors of the report recommended that the US helium reserve be maintained and replenished as helium is captured during the extraction of natural gas.

Jaffe said that the course he teaches at MIT, the Physics of Energy, was a major inspiration for the report. When researching photovoltaic cells, fluorescent lights and wind turbines, “I kept encountering the names of elements I only know from the old Tom Lehrer song.”