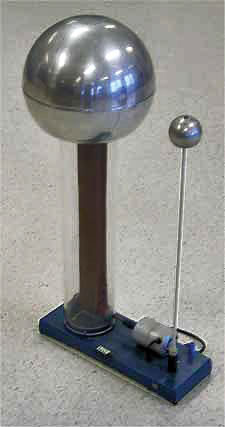 Many a visitor to science museums has encountered a Van de Graaff generator. These contraptions are staples of hands-on demonstrations in labs and at science fairs, delighting audiences by producing “lightning”, or making participants’ hair stand on end when they touch the smooth spherical surface of the device’s trademark hollow metal globe. But few people know much about the man who first invented them: Robert Jemison Van de Graaff.

Born in Tuscaloosa, Alabama, Van de Graaff earned B.S. and M.S. degrees in mechanical engineering from the University of Alabama. He worked at the Alabama Power Company for a year and studied at the Sorbonne, where he heard lectures by Marie Curie on radiation. He subsequently won a Rhodes Scholarship, earning a second B.S. in physics from Oxford University in 1926, completing his PhD in 1928.

While at Oxford, he became acquainted with Ernest Rutherford’s work in nuclear physics, and Rutherford’s idea that accelerating particles to very high speeds could disintegrate nuclei, enabling scientists to better study the nature of individual atoms.

Van de Graaff brought the notion of a particle accelerator back with him to the States in 1929, when he joined Princeton’s Palmer Physics Laboratory. There, he constructed a working model of an “electrostatic accelerator” capable of generating 80,000 volts. That rudimentary prototype used a silk ribbon from the local five-and-dime store as a charge transport belt, running between two metal pulleys.

By November 1931, he had sufficiently improved his design to produce over 1 million volts, and demonstrated his device at the inaugural dinner of the American Institute of Physics. He presented a paper about his electrostatic accelerator at an APS meeting that same year.

He was not the only scientist working on such a project. In fact, the underlying concept dated back more than 250 years before Van de Graaff. Around 1663, Otto von Guericke constructed a primitive frictional electrical machine using a sulfur globe that could be rotated and rubbed by hand. (In Opticks, Isaac Newton suggested replacing the sulfur globe with a glass one.) By 1785, N. Rouland had invented an electrostatic generator that used a silk ribbon running continuously between two pulleys to produce static electricity. And in 1893, the von Busch generator appeared, a similar machine that used two pulleys and a belt with a charge collector comb in an insulated sphere.

Shortly after Van de Graaff’s model demonstration, John D. Cockcroft and Ernest Walton, at the famed Cavendish Laboratory in England, built their own version of a particle accelerator in 1932, using voltage multiplier circuits to generate power. That machine was bulky and rather limited in how much voltage it could produce, however. Van de Graaff’s design would ultimately prove to be both more compact, and capable of higher voltages, and hence, greater acceleration of particles.

In 1932, Van de Graaff joined MIT as a research associate, where he started building a large-scale version of his machine. Housed in an empty aircraft hangar on a local estate in South Dartmouth, MA, Van de Graaff’s full-sized machine boasted two polished aluminum spheres mounted on insulating columns. Those columns in turn were placed on trucks in order to elevate the spheres 43 feet above ground.

He debuted his invention on November 28, 1933, which made headlines when it produced a staggering (for the time) 7 million volts. (The smaller Van de Graaff generators used for public demonstrations generate between 100,000 and 500,000 volts.) A patent for the Van de Graaff generator was awarded in February, 1935.

The device won the admiration of none other than Nikola Tesla, who wrote a Scientific American article on the new Van de Graaff generator in 1934, declaring, “I believe that when new types [of Van de Graaff generators] are developed and sufficiently improved a great future will be assured to them.” Tesla was prescient, as always: the generators have since been used not just in atomic physics, but also for applications in medicine and industry.

Harvard Medical School was the first to use his machine clinically to produce X-rays for the treatment of cancerous tumors with radiation in 1937. A large Van de Graaff generator was installed in the Palais de la Decouverte during the 1937 Paris Universal Exhibition under the direction of Frederic Joliot, enclosed in a giant Faraday cage. Audiences thrilled to the meters-long sparks produced by the machine, and its debut was featured on the covers of several magazines. The intent was to use the machine as a source of radioelements, but the outbreak of World War II intervened, and it was eventually scrapped.

Van de Graaff spent the war as director of the High Voltage Radiographic Project, part of the Office of Scientific Research and Development, adapting his electrostatic generator for the U.S. Navy. Once the war ended, he returned to MIT and co-founded the High Voltage Engineering Corporation (HVEC) with John D. Trump. HVEC soon became a major supplier of electrostatic generators used for cancer therapy, radiography, and for the study of nuclear structure in scientific laboratories.

Tandem Van de Graaff accelerators first appeared in 1951, based on earlier work on the tandem principle by William Bennett in 1937. Also in the 1950s, Van de Graaff invented the insulating-core transformer for the production of high-voltage direct current–using magnetic flux instead of electrostatic charge–as well as many new methods for controlling particle beams. He stayed at MIT until 1960, when he resigned to work full-time at HVEC.

In 1966, he was awarded the APS Tom W. Bonner Prize for his “device that has immeasurably advanced nuclear physics.” It was especially apropos, since Bonner himself had used a Van de Graaff generator in his fundamental work on nuclear structure. By the time Van de Graaff died in Boston on January 16, 1967, at the age of 65, there were more than 500 Van de Graaff particle accelerators in over 30 countries around the world.