At Play, Day and Night in the Museum 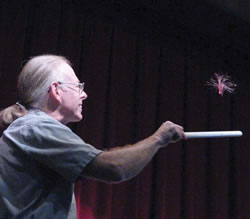 Paul Doherty was very direct on the phone. “I have the best job in the world. Wait until you hear what I get to do in physics.”

It didn’t take long to figure out why he would tender such a declaration. As Senior Scientist at the Exploratorium in San Francisco, Doherty is a consummate salesman of science, and he peddles his wares every day to an enthusiastic customer base. The physicist is involved in a multitude of arenas within the world-famous science museum, from designing and building exhibits, to teaching teachers how to use the museum’s tools to inspire their students, to advising others about how to build their own less-expensive versions of the exhibits. He was the Founding Director of the Center for Teaching and Learning, and has traveled to Zambia, Greece, the Gobi Desert, and Antarctica leading Exploratorium trips to teach and excite others about science. He has written dozens of articles and books, including the Explorabook, which has sold more than one million copies.

Doherty is constantly contemplating and orchestrating new ways to motivate kids and adults to pursue science, either as a career or an avocation. And although “I have been approached by recruiters [for other jobs],” he attests, he just can’t leave. “I can’t get any better than this.”

Luke Donev, another PhD physicist who ventured into museums, is the Educator/Applied Science Lead for the Dallas Museum of Nature and Science. Although he has only been at the museum for a year, designing and performing outreach programs for up to 1500 youngsters a week, he too is crystal clear about his future goals: “I hope to continue to go up in front of children and shock myself and blow things up and do anything I can to get them excited and into science.” he says. “I feel a PhD in physics has given me a toolbox of training that has allowed me to enjoy a vast array of jobs…I picked this job because that’s what I want to do.” 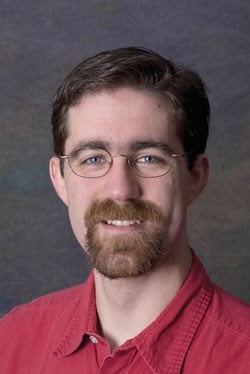 Both Doherty and Donev launched their museum-centric careers by volunteering at facilities near their previous universities, and recommend physicists explore this route. “You can always start by helping out at your local museum,” says Doherty. “Don’t be a theoretician about [working in] museums. Get a sense of it before you leap.”

He began by volunteering at the Cranbrook Institute of Science, a center that was close to Oakland University in Michigan, where he was a professor of physics. He helped to improve existing exhibits and liked it so much that he spent his sabbatical at the Exploratorium. That led him to recognize he enjoyed the Exploratorium much more than the university. He “dumped tenure” after the sabbatical and got a full-time position with the center. He’s now been there for 25 years.

Donev’s penchant for playing led to his future career path. He was an undergraduate at UC Davis when he started performing outreach programs and realized “I study physics because I think we have the best toys.” While pursuing his PhD at Cornell, he volunteered at the Sciencenter in Ithaca. “The most fun I had in grad school was doing science outreach,” says Donev. “I could be a researcher, but I had more fun with this. So after grad school I said maybe I should look for a job that is what I’ve been volunteering to do all along.”

Donev found his present job by scrutinizing the website of the Association of Science-Technology Centers (http://www.astc.org/), which lists open positions at science museums worldwide. He used the site as a jumping-off point for virtually every science center in the US, and researched job possibilities with 200 museums. When he got the job in Dallas, he considered himself lucky–during the six month period he was researching positions, he saw only four advertised openings for fulltime educators at museums, he says. 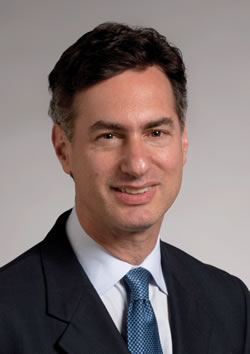 
Robert V. Steiner, who received his PhD from Yale, is the Director, Online Teacher Education Programs at the National Center for Science Literacy, Education and Technology at the American Museum of Natural History (AMNH) in New York. He took a slightly different road to his museum career. In the early 1990s, he was on the faculty at Adelphi University when “a civil war developed between the faculty and administration,” he recalls, “and it became a place that was very difficult to earn tenure.”

Although a short while later the president and the board of trustees either resigned or were dismissed, “it was too late for me,” says Steiner, and he started investigating other options. At the time, institutions were becoming increasingly interested in online education. He went to Columbia Teachers College where he developed their first web-based course, and in 2003, AMNH hired him to oversee their online science education program for K-12 teachers.

Today, 1100 educators per year take the online courses that AMNH provides. “We take great pride in the scientific rigor of these courses,” says Steiner. “We spend a great deal of time and effort to create rigorous, intelligent courses that are relevant and useful to the teachers.”

“I’ve always enjoyed teaching,” says Steiner. “Physics is traditionally known as being scary, intimidating [among students]. Many students only take it because they have to, and it’s a trial by fire. If I can help them understand that it’s cool and beautiful and wonderful and worth spending time learning, it’s very satisfying.”

AMNH has over 200 scientists across different academic units. With 32 million cultural and scientific artifacts, “the scientists are the stewards,” says Steiner. “Our goal, for the teachers, is to increase understanding of science and the process of scientific inquiry, and connect them with valuable educational resources.”

In addition to curriculum development, management and execution, Steiner is also expected to pursue external funding for his program. He currently serves as a PI on a $500k grant for the NASA Global Climate Change Education program, an opportunity he counts as one of his proudest professional achievements. “There is enormous satisfaction and privilege in being given the opportunity to help address the ongoing crisis in science education in this country,” he says. Recently he was appointed the Vice-Chair of the Committee on Educational Technologies of the American Association of Physics Teachers, an organization which can be an important resource for information about museum careers.

Physicists who want to work for science centers have a number of options within the industry. Certainly there is opportunity within the education and exhibits departments, but larger centers such as AMNH also offer full-scale research divisions. For example, the Hayden Planetarium, part of the Astrophysics Department at AMNH, is headed by physicist Neil deGrasse Tyson. Scientists at museums are encouraged to publish, attend conferences and collaborate across institutions. Administrative career paths are also available, once you establish yourself, gain experience, and understand how museums operate, say the sources. ”There are no boundaries to advancement,” notes Steiner.

But before you leap from the ivory tower to a castle filled with dinosaur bones and ping-pong balls, be forewarned: “The culture of museums is not like the culture of academia,” Doherty warns. “I had culture shock for the first three years.” He says this is especially apparent in the use of vocabulary across the industry. “Museums take words and give them new meanings,” he explains, especially in exhibit management and teaching evaluation. Phrases like “hands-on learning” or “educational standard” have different definitions and uses in museum-speak.

Doherty also points out other bewilderments–when he first arrived at the museum, he was surprised to learn that the education department at the time was so small–it housed only three physics teachers. Another shock: “Most science museums don’t have scientists on staff. They have a lot of staff who are afraid of science.”

Donev notes how astonished he was to learn how much bureaucracy it takes to sustain a science museum’s operations. “I was used to a research university. I didn’t realize how many people are behind the science, coordinating schedules, HR, accounting. There’s infrastructure that doesn’t even interact with the public.”

But the payoff is significant for these museum-based scientists. “The range of challenges here is much greater than at the university,” remarks Doherty.

“There are many paths to professional satisfaction with a physicist’s background,” reflects Steiner. “I consider myself very lucky although this is not the career I chose entirely on my own volition… It has infused my professional life with a meaning that… I could never have imagined.”

Alaina G. Levine is a science writer and President of Quantum Success Solutions, a leadership and professional development consulting enterprise. She can be contacted through www.alainalevine.com. ©, 2010, Alaina G. Levine.