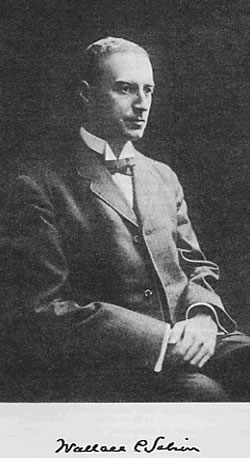 Composers have always recognized the importance of the acoustics of a given performance space, and many tailored the music they composed to fit those spaces. For instance, Gregorian chants fare well in medieval cathedrals, known for long-reverberation times; ditto for organ music, such as Bach’s “Toccata in D Minor.” In contrast, Mozart and Haydn composed music to be played in highly furnished chambers, for smaller, intimate audiences. Such pieces lose their clarity when played in highly reverberant spaces.

But no one really thought about how to design a concert hall or opera house to achieve optimal acoustics until the end of the 19th century. It was done through trial and error, with little acoustical theory to provide much of a framework to centuries of experiment.

The father of modern architectural acoustics is an American physicist named Wallace Clement Sabine. Born in 1868, Sabine graduated from Ohio State University in 1886 and pursued graduate study at Harvard University. By 1895, he was a young assistant physics professor in Harvard’s physics department. His lack of seniority is one reason he was handed the knotty problem of improving the infamously bad acoustics of the university’s Fogg Lecture Hall, part of the recently constructed Fogg Art Museum.

Sabine didn’t have any particular expertise with sound–he didn’t even hold a PhD, although he was an excellent instructor and researcher–but he doggedly tackled the challenge as he would any other physics experiment. He chose to characterize sound in a room as a diffuse body of energy, rather than adopting the more typical 19th century geometric approach that focused on manipulating the propagation of sound waves. He focused his investigations on the sound-absorbing properties of various materials and their effect on reverberation times.

To that end, he spent several years studying the acoustical qualities of both the museum’s lecture hall, and the Sanders Theater, widely considered to have excellent acoustics, in order to determine what might be causing the difference in sound quality.  Specifically, he was attempting to find some objective formula or standard by which to measure and assess the acoustics of performance space designs.

It wasn’t an easy task because so many variables had to be taken into consideration. He and his assistants tested each space repeatedly under varying conditions, moving materials back and forth between the two halls and making careful measurements armed only with an organ pipe and a stop watch. He timed how long it took for different frequencies of sounds to decay to inaudibility under those varying conditions: with and without Oriental rugs, seat cushions, various numbers of people occupying the seats, and so forth. He found that the body of the average person decreased reverberation time by as much as six seat cushions.

Based on these experiments, Sabine was able to determine that there was a definitive relationship between the quality of a room’s acoustics, the size of the chamber, and the amount of absorption surfaces that were present. He devised a formula for calculating reverberation time, defined as the number of seconds required for the intensity of the sound to drop from the starting level by 60 decibels. It is still the critical factor for gauging a space’s acoustical quality: RT60 = 0.49 V/SA, where V is the room volume (expressed in cubic feet) and SA is the total absorption (expressed in square feet), where A is the average absorption coefficient of the room, and S is the surface area. The modern unit of sound absorption, the sabin, is named after him, and is considered the most important quantitative tool in architectural acoustics today.

Sabine concluded that the Fogg Lecture Hall’s reverberation time was too long–a spoken word would remain audible for 5.5 seconds, as opposed to the optimal reverberation time of 2.25 seconds–so there was too much resonance and echo. He solved the problem by outfitting the space with sound-absorbent materials to reduce the “echo effect.”

His success cemented his reputation and he went on to serve as acoustical consultant for the design of Boston’s Symphony Hall. For that design, Sabine suggested the shoebox configuration favored in European concert halls, instead of the wider fan shape more typical of the halls built in America at that time, along with narrowed balconies to keep the sound from being trapped, and banking the stage walls inward to focus the sound. The materials used were brick, steel and plaster–all hard reverberant surfaces–with wood flooring to add a touch of “softness.” At Sabine’s suggestion, the architects topped the hall with a coffered ceiling to provide the best possible acoustical experience to every seat in the house.

Symphony Hall made its debut in 1900, with a gala preceded by a benefit concert conducted by Maestro Wilhelm Gericke. It is still considered one of the best halls in the world in terms of sound quality. One decorative detail was not among Sabine’s recommendations. The arch above the proscenium is ringed with plaques, but only one is inscribed, with the name of the great composer Ludwig von Beethoven. The original intention was to inscribe each plaque with the name of a composer but in the end, the directors deemed Beethoven the only one deserving of such an honor.

Eventually Sabine became dean of Harvard’s Graduate School of Applied Science from 1906 through 1915, when the school was dissolved. He served on the Rockefeller War Relief Commission during World War I, and was a member of the National Advisory Committee for Aeronautics as well. The strain of all his wartime activities took a toll on his already fragile health, however, and he died on January 10, 1919, from complications following surgery for a kidney infection–just before he was slated to move into a new laboratory outside of Chicago, built for him by philanthropist Colonel George Fabyan. Architectural acoustics has developed into a prestigious field of expertise since his death, and Sabine is widely recognized as the founder of the profession.