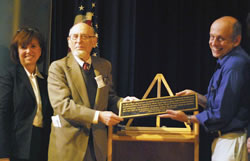 The APS Historic Sites Initiative honored two sites recently for their contributions to the advancement of physics in the United States. The Bronx High School of Science and the University of Michigan’s historic summer school both have done much to inspire new generations of American physicists. The initiative marked each site with a ceremony dedicating a plaque commemorating the historical significance of each location.

Ben Bederson, chair of the historic sites selection committee said that the aim of the initiative was “to make physicists proud of what they’ve done and to enlighten the public…The best kind of historic site to identify is one that is important to physicists, but that the public can also understand and appreciate.”

The first plaque, dedicated on October 15, honors the Bronx High School of Science, which has been a world renowned magnet technical school for science students. The school has a remarkable history; seven students who attended the school over the years have gone on to win Nobel Prizes in physics.

“It so happened that at the Bronx School of Science, who knows how it happened, seven of their graduates received Nobel Prizes. That’s mind-boggling. How many countries have seven Nobel Prize Winners?” Bederson said.

The school was founded in 1938 as an institution focusing on math and science. Over the years, the school’s reputation has grown and is now considered one of the very top science high schools in the United States and internationally.

Attending the ceremony was Nobel laureate in physics David Politzer, who himself attended the Bronx High School of Science. After the morning assembly where the plaque was dedicated, Politzer stayed for the day at the school, talking to classes and individuals and helping out in science labs. Politzer received the Nobel Prize in 2004 along with David Gross and Frank Wilczek for their work to discover asymptotic freedom in the theory of strong interaction.

The committee also dedicated a plaque at the University of Michigan to mark the historic summer school sessions it held in the early part of the 20th century.

“It was really a very important tipping point in the development of modern physics in America,” Bederson said.

In the early part of the 1900s, the United States had generally not been seen as a world leader in the field of theoretical physics. Starting in 1928, Harrison Randall, then chair of the school’s physics department, began hosting summer programs at the university to raise the stature of the United States in the field, ultimately devoting the program completely to theoretical physics.

“Every single important character almost without exception came to give lectures,” Bederson said, adding that such notable lecturers included Niels Bohr, Hans Bethe, Enrico Fermi, Werner Heisenberg, and Wolfgang Pauli. “It was an inspiration for America.”

Thanks in part to the Michigan summer school, the United States soon became one of the world leaders in theoretical physics. APS President Curt Callan unveiled the plaque honoring these summer sessions at the university on December 11. The dedication coincided with the school’s prestigious Ta-You Wu Lecture where Nobel laureate Samuel C. C. Ting spoke about the Alpha Magnetic Spectrometer on the International Space Station.