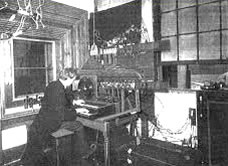 The Telharmonium in action.

By 1900, the streets of London were lit entirely by electric means. The lamps did not use incandescent light bulbs, however, even though Thomas Edison had invented them by then. Those bulbs were very new, still quite inefficient, and too dim to illuminate London’s dark streets and alleyways, although they proved ideal for indoor lighting. So London street lamps used carbon arc lamps, generating light via a continuous electric spark.

The effect had been known since the early 1800s, when scientists started building the first large batteries and noticed that electric current jumped across a gap in a circuit from one electrode to another, producing a brilliant light in the process. British chemist Humphrey Davy is credited with inventing the arc lamp. In 1809, he connected two wires to a battery, and used charcoal strips as electrodes. This created a sufficiently intense light for illumination, and Davy’s arc lamp became a popular component of his public lectures.

Arc lamps were not immediately suitable for street lighting. They required large batteries or generators, and the batteries depleted quickly because of the large currents used. So arc lamps were costly to operate, and the light fluctuated far too wildly to be of practical use. The intense heat of the arc also ate away the electrodes until the gap became too great for a spark to jump across. Generators became widely available in the 1840s, and Russian inventor Paul Jablochkoff devised a version in 1870 that used two parallel carbon rods to lengthen the service life. Arc lighting debuted in Paris in June 1878 as part of an exposition, and soon found its way to London and the US as well.

Such systems required daily maintenance by a small army of technicians, and arc lamps weren’t practical for indoor use, but the only real remaining problem was a constant humming noise–a byproduct of the generated sparks. An English physicist named William Duddell set out to find a solution, and ended up inventing the first fully electrical instrument.

Born in 1872, Duddell was privately educated in both England and France, but his knowledge of electricity came not from formal studies, but from a natural curiosity about how things worked. He was apprenticed to an electronics shop as a teenager, eventually teaching at the City and Guilds Institute in London, where he received much of his education. He had a knack for invention, too, building an oscillograph capable of photographic recording and observing of oscillating frequency waveforms; a thermo-galvanometer to measure very low currents; and a magnetic standard, the better to calibrate ballistic galvanometers of the era. Modified versions of his thermo-galvanometer are still used today.

In 1899, Duddell decided to tackle the humming problem in London streetlights. A few years earlier, a German scientist named Dr. Simon had noticed that an electric arc could “sing” if one modulated the voltage to its power source. It is unclear whether Duddell knew of Simon’s work, but he conducted numerous experiments of his own. He also discovered that varying the voltage powering the lamps allowed him to control the audio frequencies via a resonating circuit. This did not eliminate the humming problem he had set out to solve, but it did give Duddell an idea. By attaching a makeshift keyboard, he was able to produce musical notes. This led to his invention of the “singing arc,” which he first exhibited to a group of electrical engineers in 1899. Nature reported on the invention in 1900.

It was not the first such electric instrument. Back in 1761, a Parisian inventor named J.B. Delaborde built an electronic harpsichord. There was also a musical telegraph from 1876 and an electro-mechanical piano from 1867. The availability of components like solenoids and motors led to many versions of electromechanical instruments. However, the “singing arc” was the first electronic instrument that could be heard without an amplifier. And those who witnessed Duddell’s demonstration of his invention noticed another peculiar effect: nearby arc lamps that used the same power source also played the “music” being generated by the singing arc.

But despite the fact that he toured the country demonstrating his invention, Duddell’s “singing arc” amounted to little more than an amusing novelty of engineering. He never developed it further, or patented his invention, which is a shame, because several scientists speculated about the potential for playing music over London’s lighting network, based on that unusual effect. Later inventors realized that the device could be used as a radio transmitter just by attaching an antenna.

The other major electric instrument that appeared around the same time was the Telharmonium. It was patented in 1897 and built in 1906 by Thaddeus Cahill. The Telharmonium relied upon an array of 145 large rotary generators (dynamos) to create alternating currents at different audio frequencies, and then used acoustic horns and telephone receivers to convert those waveforms into sound. He even managed to construct a network of wires so that people in New York City could subscribe to his Telharmonic transmissions. The instrument was far too bulky to enjoy widespread use–it weighed 200 tons and was 60 feet long, easily filling a room, and cost $200,000 to build–but even though the prototype has been lost, it is recognized as a precursor to such instruments as electronic organs, synthesizers and similar technologies commonly used today.

Duddell went on to serve as president of the Institute of Electrical Engineers, and was elected to the Royal Society in 1907. In his later years he took on secret research for the US government. Alas, Duddell died young, at the age of 45. England’s Institute of Physics named its Duddell Medal in his honor, awarded to scientists who have made contributions to the advancement of the knowledge of physics. And electric instruments revolutionized the music industry. Today, modern music makers are hearkening back to the past, creating music with “singing Tesla coils” and similar technologies. Duddell would have approved.