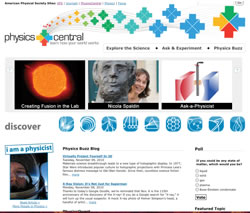 The APS website for the public, PhysicsCentral, is sporting a face lift designed to make its content more attractive and easier to find.

The site now features a more clean and open look. All of the original content is still there for people to browse, including bios of noted physicists, the Physics Buzz Blog and Physics in Action articles; however, it’s been reorganized to allow for easy access.

“Previously we felt the PhysicsCentral website looked like a box of crayons,” said APS Outreach Specialist Tassia Owen, who helped spearhead the redesign. “It was confusing and not very clean. We wanted to make it more user-friendly and update the feel of the website.”

“It’s really exciting to be at the forefront of physics websites for kids,” Owen said, “Hopefully the redesign will help spark that interest in kids as well as adults and this is a great way to get the word out.”

The new website prominently features a rotating carousel of features just below the redesigned banner at the top of the page. Below that is an interactive icon bar that links to articles tagged with different physics concepts such as “Forces & Motion,” “Quantum Mechanics” and “Chaos.” The Buzz Blog has been given a new home in the center of the page, between the “I Am a Physicist” section and the physics poll.

On the new site, there are few visual barriers as the eye moves across the page. In the previous design, each feature was sectioned off into its own panel. The new version eliminates almost all panels and softens the color scheme to make the overall site less visually intense.

“If I had to pick one word, it’s ‘light’,” said Krystal Ferguson, the designer of the site when asked to describe its new look. “I think the lightness lets you go right to the content. It’s content focused.”

Ferguson said in order to appeal to more of a teenage audience she was in part inspired by the look of the popular social networking site Facebook.

Moving the audience’s focus towards the information on the site was a major aim of the redesign.

We’re just trying to better engage teenagers who are interested in physics,” said webmaster Sara Conners. “We made the content more accessible on the main page.”

In addition to a new look, Owen said that there will be a regular schedule for updates to the site’s content. Mondays will feature a new video; Wednesdays, a new podcast; and every other Tuesday, a new Physics at home article about experiments people can do at home.