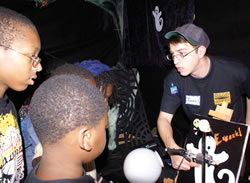 Photo by Michael Lucibella/APS
APS LaserFest Coordinator James Roche demonstrates the "squealing wall", in which a laser beam, reflected off a mirror and coupled to a solar cell and speaker, produces eerie sounds due to the interference of the beam with itself.

As 2010 draws to a close, so too does LaserFest, the celebration of the fiftieth anniversary of the first working laser. The yearlong collection of events brought attention not only to the laser itself, but the scientific research and development that led to its invention and applications.

“LaserFest was a year’s worth of outreach events all around the world related to the laser’s birthday,” said James Roche, APS LaserFest Coordinator, adding that the aim was to give the public “a better appreciation about how your everyday life can be improved by scientific innovation like the laser.”

APS joined with three other founding partners, the Optical Society of America, IEEE Photonics, and SPIE, to make LaserFest happen. By the end of the year, a total of 76 additional partners had signed on as well.

LaserFest held a gala kickoff event on February 12 at the Smithsonian National Museum of American History, on the heels of the worst blizzards Washington DC had seen in years. An auditorium full of hardy souls who braved the elements heard Energy Secretary Steven Chu, who shared the 1997 Nobel Prize in physics for a technique to cool atoms with lasers, deliver the keynote talk.

The laser officially celebrated its birthday on May 16, marking fifty years to the day after Theodore Maiman demonstrated a working laser for the first time. OSA held a symposium at the CLEO conference in San Jose, and APS dedicated a commemorative plaque at the Hughes Research Laboratories in Malibu, California, at the site where the historic event occurred.

Additionally, that week the US House of Representatives drafted a resolution honoring the laser, and President Obama issued an official White House letter lauding the basic science research that led to the laser’s invention.

“One of the biggest successes of LaserFest is that it’s an unprecedented collaboration and cooperation, a partnership of a lot of scientific organizations that haven’t ever really done this before,” said Barbara Hutchison, director of global development at OSA”

The LaserFest website served as an interactive nucleus for users to find information about the laser, LaserFest and associated events. Because of its wealth of information, organizers plan to keep it active past the end of the year so the public can still access information on the laser including the latest laser news, a detailed timeline of the conception, invention and applications of the laser, information on how lasers work, and what everyday items they are part of.

With funding from the Department of Energy, the National Science Foundation and the Richard Lounsbery Foundation, APS sponsored LaserFest on the Road to recruit people enthusiastic about outreach to help spread the word about science and lasers. Almost 100 applicants submitted their own original ideas for outreach events and activities. All told, 38 teams received grants to disseminate the message of LaserFest across the country and internationally.

David Scherer of Physical Sciences Inc. traveled to classrooms in Guatemala City and Antigua, Guatemala with an activity module for students to learn hands on about how lasers and optics work. Students at Idaho State University put on a travelling laser science road show that went on tour across Idaho and Nevada putting on free laser demonstrations. Eight students from the Laser Research Institute at the University of Stellenbosch in South Africa travelled 5500 kilometers visiting nine remote rural schools across South Africa and Namibia bringing laser and optics demonstrations to school children, many of whom had never seen a laser before.

Members of the APS outreach team traveled across the country and even across the Atlantic to participate in different events and meetings informing people about how society has been affected by lasers. In addition to various APS meetings, as well as meetings of the American Association of Physics Teachers, some of the locations included Germany’s LASYS conference, the American Geophysical Union conference in San Francisco, the Geological Society of America’s conference in Portland Oregon, and even Comic-Con International in San Diego.

At Comic-Con the outreach team showed off their original comic books for middle school students featuring Spectra, the laser superhero who fights the evil Miss Alignment and explores the history of lasers and what they do.

The number of people reached has been tremendous. The OSA estimates that at least 6 million people have been impacted directly through events, exhibits, partners and student chapters, and many more through media coverage and news reports.

“I think it was fabulously successful,” Hutchison said. “It was an incredible year.”