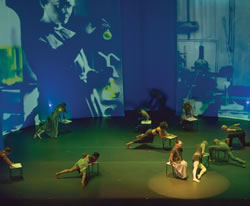 Dancers in Liz Lerman's The Matter of Origins perform on stage before a large projection of Marie Curie in her lab. The performance also included stage settings using images from the Hubble Space Telescope and the Manhattan Project.

Physics has recently taken center stage as performances about the physical sciences have thrived. The performances run the gamut of artistic endeavor, including plays, operas, and dance productions. The different shows focus on a wide array of disciplines in physics and go into different depths of their subjects; however, all prominently feature physics and science.

“The thing for me that has always and continues to be the reason I write about science is because it’s inherently dramatic. There’s abundant character, and inherent plot,” said playwright Lauren Gunderson. “I think on a more existential level, science lets us talk about the biggest ideas, and I think that keeps theater relevant and philosophical, in a way I think people crave when they go to the theater.”

“People are very very interested in this. Those that go into the theater really get excited about learning more about it. It’s sort of the NPR crowd,” Gunderson said. “There is a great movement of movies and plays about science.”

Gunderson also wrote Background about the life of physicist Ralph Alpher, Leap which features Isaac Newton, and Baby M, which, according to her website, combines maternity, murder and M-theory. Her next major production, set to premiere at the Kennedy Center in Washington, is aimed at a younger crowd. Titled The Amazing Adventures of Dr. Wonderful and her Dog, it tells the story of a 5th grade girl who uses science to solve mysteries. Gunderson was also instrumental in setting up the playwright in residence program at the Kavli Institute for Theoretical Physics in Santa Barbara.

The Liz Lerman Dance Exchange premiered its dance production A Matter of Origins at the University of Maryland’s Clarice Smith Performing Arts Center on September 10th. Taking inspiration from her trip to CERN, Lerman created an interpretive dance performance inspired by the physics of beginning of the universe.

“I got very much into the poetry of the mind. I think these physicists are incredible poets, in the sense it’s both concrete and abstract at the same time,” Lerman said.

The first act moves from the inside of Marie Curie’s lab to the Large Hadron Collider, then out through the Hubble Space Telescope to the edge of the Universe. The second act moves the audience members into several small rooms with tea and chocolate cake to discuss the issues raised in the first act with other audience members and a physicist moderator. The performance is heading next to Wesleyan University in February 2011, followed by a stint at Montclair State University in March and then to Arizona State University in April in conjunction with its Origins Institute.

The moral and ethical issues that go along with physics discoveries are also ripe fodder for the stage. The famous 2005 opera Dr. Atomic written by John Adams and Peter Sellars highlighted the ethical conundrum felt by Robert Oppenheimer and other members of the Manhattan Project as they labored to produce the atom bomb. Similarly, an earlier work dealing with the morality of physics and physicists is Michael Frayn’s 1998 play Copenhagen, about Niels Bohr and Werner Heisenberg’s mysterious meeting in Denmark in the early days of World War II. The performance is an examination of what exactly transpired between the two physicists and launches into a philosophical discussion over the morality of scientists and the atomic bomb. Though Bohr and Heisenberg are two of the most famous physicists in history, the play is not about their scientific discoveries.

“There’s very little physics in the play itself,” Frayn said.” I have absolutely no understanding of physics whatsoever.”

Instead, the play focuses mostly on what Heisenberg might have said to Bohr about Germany’s attempts to create an atomic bomb, a subject long debated by historians.

“The intention was not to write a play about science or a moral tract or even a moral or ethical examination. It was to write a story about why humans do what they do,” Frayn said. “If you are to make any moral judgments on anyone, you have to understand their actions.”

This is a sharp contrast to Lisa Randall’s 2009 opera Hypermusic Prologue which premiered at the Centre Pompidou in Paris in June. The opera focuses on the concepts of extra dimensions as one of the protagonists travels into five dimensional space. Randall, a professor of theoretical physics at Harvard, was first contacted by the Spanish composer Hèctor Parra who wanted to turn the concepts in her book, Warped Passages, into an opera. She said that Parra was a driving force to include as much physics in the production as possible.

“In some sense there’s a lot of [physics], more than I would have put in,” Randall said, “There’s quite a bit, but it’s not explained so I don’t think people are necessarily going to understand it all.”

Randall added, “I think there’s a lot of excitement about doing something like this. I think people want to see more about art and science put together.”