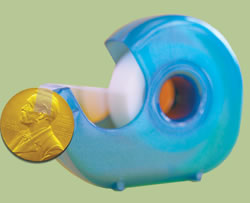 The Royal Swedish Academy of Sciences awarded the 2010 Nobel Prize to Andre Geim and Konstantin Novoselov of the University of Manchester in the United Kingdom for “ground-breaking experiments” on graphene. In a paper published in Science in October 2004, Geim and Novoselov announced that they had been able to for the first time create a sheet of carbon atoms one atom thick.

The remarkable characteristics of graphene hold a tremendous amount of promise for future applications. It is both the thinnest material ever created while stronger than the world’s strongest steel. According to the Royal Swedish Academy of Sciences, “In our 1 m2 hammock tied between two trees you could place a weight of approximately 4 kg before it would break. It should thus be possible to make an almost invisible hammock out of graphene that could hold a cat without breaking.”

Even with its strength, it is still flexible. It is as good an electrical conductor as copper and better at conducting heat than any other material. It is almost completely transparent and its hexagonal molecular structure is so dense that not even helium can pass through.

It is thought that graphene could hold the key to many future technologies ranging from transparent touch screens and solar panels to strong composite materials and the hypothesized space elevator.

Scientists had been trying for years to isolate such a carbon molecule because of its amazing theorized structural and electrical properties. However all had been frustrated in their attempts. Many had given up, believing that there was no way such a thin sheet of carbon could be stable at room temperatures.

Geim and Novoselov’s technique was as novel as it was simple. They stuck a piece of scotch tape on a chunk of graphite and pulled off a thin layer. After repeated attempts, they were able to isolate a flat sheet of carbon one atom thick, the long sought-after sample of graphene.

“We just try to be curious in everything and most importantly, to have fun. So André introduced this habit of Friday evening experiments where you just do crazy things and then some of them sometimes come out, sometimes not, and basically graphene was one of those as well,” Novoselov said in a taped interview.

“My work is my hobby. So some people would call me a workaholic; I don’t consider it this. I just love my work so much so it’s my real hobby,” Geim said in a taped interview.

In the six years since the team published their paper, graphene has become one of the hottest research areas in condensed matter. It’s estimated that over 2500 scientific papers were published in 2010 on graphene. Last year at the APS March Meeting, hundreds of abstracts on the subject were submitted and nineteen special focus sessions on graphene were held.

Geim’s award also marks the first time that an individual has won both an Ig Nobel prize as well as a Nobel Prize. The Annals of Improbable Research awards Ig Nobel prizes to goofy but legitimate scientific research. Geim won an Ig Nobel in physics in 2000 for work on diamagnetic levitation where he suspended frogs in air using magnetic fields. Placing the frog in the magnetic field was another Friday evening experiment.