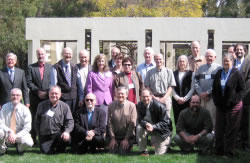 The Astronomy and Astrophysics Survey Committee

Every ten years the astronomy community mounts a major effort to define a scientific program for the next decade. The surveys build community consensus around a set of priorities for major projects in the field.  They have been remarkably successful over the last 50 years in promoting the implementation of these high-priority initiatives on the ground and in space.

The current survey, organized under the auspices of the Board on Physics and Astronomy and the Space Studies Board of the National Research Council, was recently released in preliminary form (National Research Council 2010).  Following in the footsteps of its five predecessors, it recommends a prioritized program of activities for the 2012-2021 decade, and it lays the foundation for the decade after that. But unlike previous surveys, it reprioritized any project recommended in a previous survey that has not been realized. And, responding to concerns about cost growth of major projects, the survey engaged the Aerospace Corporation to assist it in assessing the technical readiness and appraising the likely cost of the large projects. The recommended program fits within plausible budget scenarios based on input from the agencies supporting research in this field. As a result, recommended priorities reflect an executable balance of scientific promise against cost, risk, and readiness. The international context also played an important role in the committee’s deliberations, and many of the large projects involve international collaboration as well as private donors and foundations.

An important feature of the surveys is extensive consultation with and input from the scientific community. To plan the survey and assist in making the decision about when to initiate it, the Board on Physics and Astronomy convened a group of researchers at the National Academies’ Keck Center.  The result was the foundation of a proposal to NASA, NSF, and DOE to launch a new survey, dubbed Astro2010. The Survey Committee, formed in 2008, created 9 panels involving 123 members of the astronomy and astrophysics research community at universities and government laboratories to provide science assessments and to establish priorities within defined areas of ground-based and space-based research. The Committee issued a request for information to elicit proposals for projects to be prioritized, which resulted in the submission of over 300 white papers that provided broad community input to the panels. More details on the process may be found at http://www.nationalacademies.org/bpa.

The Committee found that astronomers’ overall view of the universe has changed dramatically in the last decade.  Hundreds of planets of startling diversity have been discovered orbiting distant suns. Black holes, once viewed as an exotic theoretical possibility, are now known to be present at the center of most galaxies, including our own. Precision measurements of the primordial radiation left by the big bang have enabled astronomers to determine the age, size, and shape of the universe. Other astronomical observations have also revealed that most of the matter in the universe is dark and invisible and that the expansion of the universe is accelerating in an unexpected and unexplained way. Recent discoveries, powerful new ways to observe the universe, and bold new ideas to understand it have created scientific opportunities without precedent.

The growing intersection between physics and astronomy figures prominently in the new discoveries and insights about the universe. The physics underlying many astronomical phenomena is becoming clearer. At the same time, the cosmos is proving to be a laboratory for the exploration of basic questions in general relativity, particle and nuclear physics, and atomic, condensed-matter, and plasma physics.

The science objectives chosen by the survey committee for the decade 2012-2021 are:
• Searching for the first stars, galaxies, and black holes;
• Seeking nearby habitable planets; and
• Advancing understanding of the fundamental physics of the universe.

These three objectives represent unprecedented opportunities now becoming within our capability to explore. The discoveries made will surely lead to new and sometimes surprising insights that will continue to expand our understanding and sense of possibility, revealing new worlds and presenting new horizons, the study of which will bring us closer to understanding the cosmos and our place within it.  The identification of these science priorities played a seminal role in the process: the organizing principle for construction of the project priorities was to provide a balanced portfolio of capabilities to address these science objectives.

This report recommends a program that will set the astronomy and astrophysics community firmly on the path to answering some of the most profound questions about the cosmos. In the plan, new optical and infrared survey telescopes on the ground and in space will employ a variety of novel techniques to investigate the nature of dark energy. These same telescopes will determine the architectures of thousands of planetary systems, observe the explosive demise of stars, and open a new window on the time-variable universe. Spectroscopic and high-spatial-resolution imaging capabilities on new large ground-based telescopes will enable researchers to discern the physical nature of objects discovered at both shorter and longer wavelengths by other facilities in the committee’s recommended program. Innovative moderate-cost programs in space and on the ground will be enhanced so as to enable the community to respond rapidly and flexibly to new scientific discoveries. Construction will begin on a space-based observatory that employs the new window of gravitational radiation to observe the merging of distant black holes and other dense objects and to precisely test theories of gravity in new regimes that we can never hope to study on Earth. The foundations will be laid for studies of the hot universe with a future X-ray telescope that will search for the first massive black holes, and that will follow the cycling of gas within and beyond galaxies. Scientists will conduct new ground-based experiments to study the highest-energy photons emitted by cosmic sources. At the opposite end of the electromagnetic spectrum, radio techniques will become powerful enough to view the epoch when the very first objects began to light up the universe, marking the transition from a protracted dark age to one of self-luminous stars. The microwave background radiation will be scrutinized for the telltale evidence that inflation actually occurred. Perhaps most exciting of all, researchers will identify which nearby stars are orbited by planets on which life could also have developed.

Realizing these and an array of other scientific opportunities is contingent on maintaining and strengthening the foundations of the research enterprise that are essential in the cycle of discovery–including technology development, theory, computation and data management, and laboratory experiments, as well as, and in particular, human resources. At the same time, the greatest strides in understanding often come from bold new projects that open the universe to new discoveries, and such projects thus drive much of the strategy of the committee’s proposed program. This program requires a balance of small, medium, and large initiatives on the ground and in space. The large and medium elements within each size category are as follows:

In Space: (Large-scale, in priority order) Wide-Field Infrared Survey Telescope (WFIRST)–an observatory designed to settle essential questions in both exoplanet and dark energy research, and which will advance topics ranging from galaxy evolution to the study of objects within our own galaxy. The Explorer Program–augmenting a program that delivers a high level of scientific return on relatively moderate investment and that provides the capability to respond rapidly to new scientific and technical breakthroughs. Laser Interferometer Space Antenna (LISA)–a low-frequency gravitational wave observatory that will open an entirely new window on the cosmos by measuring ripples in space-time caused by many new sources, including nearby white dwarf stars, and will probe the nature of black holes. International X-ray Observatory (IXO)–a powerful X-ray telescope that will transform our understanding of hot gas associated with stars and galaxies in all evolutionary stages. (Medium-scale, in rank order) New Worlds Technology Development Program–a competed program to lay the technical and scientific foundation for a future mission to study nearby Earth-like planets.  Inflation Probe Technology Development Program–a competed program designed to prepare for a potential next-decade cosmic microwave-background mission to study the epoch of inflation.

On the Ground: (Large-scale, in priority order) Large Synoptic Survey Telescope (LSST)–a wide-field optical survey telescope that will transform observation of the variable universe and will address broad questions that range from indicating the nature of dark energy to determining whether there are objects that may collide with Earth. Mid-Scale Innovations Program augmentation–a competed program that will provide the capability to respond rapidly to scientific discovery and technical advances with new telescopes and instruments. Giant Segmented Mirror Telescope (GSMT)–a large optical and near-infrared telescope that will revolutionize astronomy and provide a spectroscopic complement to the James Webb Space Telescope (JWST), the Atacama Large Millimeter Array (ALMA), and LSST. Atmospheric Cerenkov Telescope Array (ACTA)–participation in an international telescope to study very high energy gamma rays. (Medium-scale) CCAT (formerly the Cerro Chajnantor Atacama Telescope)–a 25-meter wide-field submillimeter telescope that will complement ALMA by undertaking large-scale surveys of dust-enshrouded objects.

These major new elements must be combined with ongoing support of the core research program to ensure a balanced program that optimizes overall scientific return. To achieve that return the committee balances the program with a portfolio of unranked smaller projects and augmentations to the core research program, funded by all three agencies. These elements include support of individual investigators, instrumentation, laboratory astrophysics, public access to privately operated telescopes, suborbital space missions, technology development, theoretical investigations, and collaboration on international projects.

This report also identifies unique ways that astronomers can contribute to solving the nation’s challenges. In addition, the public will continue to be inspired with images of the cosmos and descriptions of its contents, and students of all ages will be engaged by vivid illustrations of the power of science and technology. These investments will sustain and improve the broad scientific literacy vital to a technologically advanced nation as well as providing spin-off technological applications to society.

The Committee and I are deeply grateful to the astronomy and astrophysics community for its commitment to a gigantic effort and broad involvement as well as a willingness to support the community consensus. That support was essential to producing the report and it will continue to be essential in implementing the shared vision that the report recommends.

Roger Blandford, who chaired the Committee for a Decadal Survey of Astronomy and Astrophysics, is the Pehong and Adele Chen Director, Kavli Institute of Particle Astrophysics and Cosmology at Stanford University. Donald C. Shapero is the Director of the Board on Physics and Astronomy of the National Research Council.