Brewing a Life of Worts and Ale 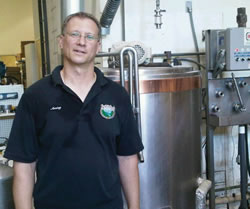 I guess physics can be boring sometimes. How many times can you measure the expansion of the Universe? And what’s the deal with lasers? We get it–they’re coherent light and they help cell phones work and remove facial hair. While most physicists don’t mind enduring a burdened lifetime of examining nature, there are a few who thirst for more. And if one is opting to choose something other than physics, what’s the next best thing? The answer is clear: Beer.

George Stranahan and Anning Smith are both physics-educated professionals who felt there was plenty more barrels of satisfaction to be had in brewing beer, so they went into the business. Smith owns a brew-your-own-beer microbrewery, Shenandoah Brewing Company in Alexandria, VA, in which he and his staff assist customers in mixing and preparing their own beer. Stranahan, based in Colorado, has owned a tavern, brewpub, and brewery, and is currently a partner in another brewpub. Although each took a decidedly different route to become a brewmaster, both have never regretted their decisions. In fact, Stranahan, who took his first swig of beer at the tender age of 12 and adored it, knowingly calls this career choice “intoxicating”. “I love it when people say ‘I love your beer’,” he says.

The best part of being a brewer, notes Smith, is that “nobody’s bummed out about being in a brewery. The people who come here want to be here.” His foray into brewing was fomented by a love of science and a desire to be an entrepreneur. As a pupil at tiny Hiram College (where only 1000 students were enrolled) in Hiram, OH, he was thrust into an environment that valued creativity and frugality. The school had “good professors and very little money…I was the only physics student in (my) graduating year,” he recalls. “I had the run of the physics lab and if in the middle of the night I felt like it I could go in there and play,…as long as I didn’t blow anything up.”

After graduation, he pursued an engineering and policy master’s degree, specializing in technology and human affairs, at Washington University in St. Louis. When he completed his studies, he accepted a position at the Environmental Protection Agency, where he helped implement the Toxics Release Inventory and the Pollution Prevention Act of 1990.

During his time at the EPA, he began to realize that he wanted to launch his own business. He remained at the EPA for seven years, all the while traveling for pleasure, enjoying global beers that could not be found in the US, and realizing that the “bug” to start a business was biting him. In 1991, when homebrewing was beginning to be a national fad, he and his wife started brewing beers at home. By 1994 they formed the company and only two years later opened the brewery. 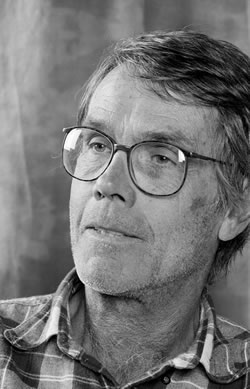 Stranahan, on the other hand, got more than just his feet wet in physics, among other endeavors, before he crafted his microbrewery enterprises. With a BS from Caltech and a PhD from the Carnegie Institute of Technology, he labored as a postdoc at Purdue and an associate professor at Michigan State before he left the field. He also was an award-winning cattleman and restaurant-owner. But his physics legacy will always be that he co-founded the Aspen Center for Physics.

In 1961, while still at Carnegie, he proposed the following argument: “I am a theorist…I don’t need to be in Pittsburgh.” Stranahan had spent a few weeks in Aspen before, and loved it so much he wanted to live there. And he realized “you don’t do physics alone with a pad and pencil. You do physics at a blackboard–it’s a social experiment.” He and Michael Cohen of the University of Pennsylvania suggested the creation of a new research center for theoretical physics to the executive director of the Aspen Institute for Humanistic Studies. The goal was a place where theorists could come in the summers to take part in that “social experiment” and discuss physics in an unstructured and relaxed environment. The Aspen Institute agreed to support the novel scheme, and by 1962 the first group of physicists arrived at the mountain community to talk shop.

Despite this grand contribution to physics, Stranahan doesn’t consider himself a physicist, although his comrades would question otherwise. “I’m a beer- and whisky-maker and a farmer,” he admits, “but my friends say you can’t wash it out. It’s a Lady Macbeth thing.” It’s a good thing, though, because he still gets free coffee at the Aspen Center where he occasionally goes to gab with his buddies.

Stranahan’s career took many other turns before it dipped into beer. After relocating to Aspen permanently, he ran a farm and raised cattle. He published a magazine. He ran a Central American restaurant. In later years, he became a photographer. In 1980, he founded Woody Creek Tavern, which became a popular watering hole in the region. And in the 1990s, he and a partner launched Flying Dog Brewpub. The unusual moniker came from a mountaineering expedition he did to Pakistan in the early 1980s. Stranahan was at the Base Camp of K2 when he realized “we had run out of alcohol,” he recalls. When they finally got back to their hotel in the village, “we were thirsty and in one of our rooms was a painting of a bird-dog flying through the air–a ridiculous painting.”

He adopted what he felt was the attitude that trip embodied–one of danger and “purposeful irreverence,” and Flying Dog Brewpub was born. Later, he launched Flying Dog Brewery. The company had distribution deals and won many awards for their beer. It has been very important to Stranahan for people to enjoy his beer, and not just for its taste. “I want them to have the Flying Dog experience… We push the envelope with the taste curves…we’re not in the middle–it’s quite political–we’re trying to express civil disobedience (with the labeling).”

He views the beer bottle labels as art rather than marketing, although he acknowledges the importance of marketing in telling stories and selling product. “If ever there was a physicist who loved marketing, it was Feynman,” he opines. “He loved creating stories and telling myth and the Flying Dog is a myth.”

Stranahan and Smith both see parallels and connections between physics and brewing. “Brewing is a nice combination of art and science,” remarks Smith. The scientific aspect is apparent in the biological process of fermentation, he says, and even in the technological requirements of a clean environment. But it is not all science. A trained eye and an appreciation for unknown variables in brewing are needed to produce excellent beer. But this is where physics know-how comes in especially handy.

“Science is a kind of an attitude to understand things more deeply, a search–as intense as an ache,” explains Stranahan. “Making the beer and searching for the myth and creating the marketing,…I’m driven by finding answers. It’s very similar. I feel good doing this.”