By Gabriel Popkin and Sara Webb 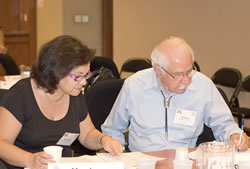 Yesim Darici of Florida International University (left) and JD Garcia of the University of Arizona do their homework during the Minority Bridge workshop.

For three days this summer, APS brought together a group of university faculty, students, and administrators to address the low participation of minorities in physics graduate programs. The workshop was the culmination of the first year of the Minority Bridge Program (MBP), which aims to increase the number of underrepresented minority physics majors making the transition to graduate school. Currently, only five to six percent of physics PhDs granted to US citizens are awarded to these minority students.

The goal of the MBP is to develop “bridge programs” that facilitate the transition to graduate school for physics students from underrepresented minority groups. During its first year, project manager Michelle Iacoletti conducted site visits to minority serving institutions and held meetings with doctoral granting institutions to learn about the issues involved, and recruit participants. Project director Theodore Hodapp, who is Director of Education and Diversity at APS, says, “the Minority Bridge Program is a major initiative aimed at closing the gap between undergraduate and graduate programs for minority students, and providing the next generation of mentors.”

Faculty from several institutions already offering bridge programs gave presentations describing their models. One such program is the Fisk-Vanderbilt Masters-to-PhD Bridge Program, which since its inception in 2004 has enabled 30 students (16 of whom are women) to successfully “cross the bridge” from Fisk University to a PhD program in the physical sciences at Vanderbilt University or another institution of their choice. Co-director Keivan Stassun, a Vanderbilt University physics and astronomy professor, said the program looks for unrealized or unrecognized talent in potential students and then puts individualized measures in place to help them succeed.

Workshop participants also heard from a panel of current minority graduate students about the important roles mentors played in their success. Vanderbilt student Erica Morgan spoke about the importance of mentorship in navigating the transition to graduate school: “My mentor set clear standards and held me to those standards.” Student panelists also stressed the importance of a mentor’s ability to understand and provide support on personal issues that affect student success, such as financial issues, feeling like part of a community, and family considerations.

Breakout discussions and group feedback sessions encouraged candid conversation and networking, which participants said led to valuable connections. Willie Rockward, a physics professor at Morehouse College in Atlanta, Georgia, stated that “the MBP Workshop stimulated a strong pulse of excitement, thoughtfulness, and collaborative synergy among the vast cross-section of students, faculty, and administrators from minority and majority institutions.”

“Faculty from minority serving institutions often don’t go to the same conferences as their colleagues from doctoral granting institutions, and consequently don’t have enough opportunities to network with each other,” says Iacoletti. “One of our goals in holding this workshop was to provide a venue for these kinds of connections to be made.”

The MBP recently received further recognition and support through a resolution passed by the APS Executive Board in June: The American Physical Society recognizes the significant disparity in participation by underrepresented minorities in physics at all levels, and commits to support the Minority Bridge Program that will establish a set of programs and related efforts to help underrepresented minority undergraduates transition to doctoral degree-granting programs and obtain PhD degrees in physics.

Funding for the workshop and other efforts comes from the National Science Foundation. In the following months, project leaders will work to finalize the structure for the program and secure funding for a large-scale, multi-year initiative.