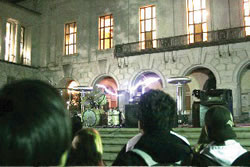 Much has been made about the crisis in STEM education, and in physics in particular. The National Academies’ Rising Above the Gathering Storm report tells us the economic sky is falling, and we don’t have enough physicists to hold it up. More must be done to increase the number of physics students and increase the quality of physics education. How should physics departments respond?

At UT Austin, one could conclude all is well. We have a highly-ranked department at a premier state university which draws some of the best students in Texas. Our majors go on to prestigious graduate schools. At the same time there’s more dark cloud than silver lining when you look at the entire picture. Our department has a near-stagnant 200 undergraduate population, compared with an ever-growing 3,000 in biology and 1,500 in chemistry. Only half of our 60-70 freshmen graduate with a physics BA or BS. Much of that 50% attrition is migration to other majors, especially engineering. Finally, students carry a negative perception about the utility of physics in seeking jobs and about the quality of instruction and mentoring within the department. Acknowledging such dark clouds, we began a program at UT to reinvigorate the physics major, thereby attracting and retaining a broader cadre of students.

UT isn’t lacking for good applicants; students are choosing other, challenging majors like biochemistry and engineering because of perceived employment opportunities, relevance to everyday life, and the sense that by pursuing these careers they will enter an intellectually-stimulating community tackling important questions. Among physics majors, such sense of identity and mission is often lacking.  When faced with a major whose advantages are unclear, students choose others whose advertised virtues are many.

Our task was to better understand how students perceive and experience physics and the physics major and how those perceptions and experiences influence their choices. We began by conducting focus group research, interviewing current physics majors and also non-physics majors (engineering, biology, chemistry, etc) who said they would not consider majoring in physics. What we found was sobering but not unique to UT. Students reported that professors don’t convey a passion for physics and don’t discuss it; without a role model it’s hard for students to identify their own passions for physics. Students felt that professors rarely make connections between physics and other scientific topics or careers that utilize physics. Students feel professors don’t tie classes to their own research, so that they lack any role models for future careers within physics. Students expressed a sense of feeling lost and that professors don’t care whether they “get it” or not. They identified a disconnect between introductory physics courses (inclined planes and pulleys) and the more exciting, modern physics that initially attracted them to the subject. While some student perceptions are unfair to the intentions of the faculty, the disconnect between student perceptions and faculty/department intentions requires our attention.

On the bright side, current and past students in physics could identify what initially got them excited about physics. Nearly every student indicated that, while other majors told them what various things are, physics could answer the “why.” Why is the sky blue? Why are some materials conductors and others insulators? Why is the universe expanding? Twenty-nine out of 30 students in the focus groups said they were in physics to pursue the why. This suggested that our department and our field more generally needs to recognize this pursuit as our unique role and skill set and intentionally promote that identity if we are to connect with the broad array of talented students who desire and value that skill set for whatever passions or careers they pursue.  Physics is a tool kit that teaches students how to think and how to pursue the “why” in whatever they do.

We set about communicating that message to intentionally promote UT Physics as a major that helps students pursue the why. We also set about changes to the program that refines our courses and our teaching to help students attain that goal. The promotion effort reached out with the signature phrase, “Does the ‘Why’ keep you up at night? Us too.  UT Physics.” Then to promote that identity effectively and broadly, we used methods borrowed from the discipline of consumer marketing.

We had a multi-pronged approach, with all prongs contributing to a larger strategy. First, we told student leaders such as the Society for Physics Students about the focus group findings and sought their input on our plans for changes in the physics program and promoting this identity of physics pursuing the “why.” Second, we anchored the effort with real physics student testimonials. Third, we sent emails to all physics and non-physics students taking any physics course telling them changes were being made and what the changes would mean to them. Fourth, we asked physics students, especially those in the testimonials, to make short announcements in all physics classes (for majors and non-majors) about major events. Fifth, we designed and found ways to give out humorous tee shirts to non-physics majors–there are 200 physics majors and we’ve given away 950 shirts–that broadened the message all around campus. Sixth, we made the identity visible in our physics building, hanging a huge banner in the ground floor lobby with pictures of students in the testimonials and the effort’s signature phrase. Every student taking physics passes that banner en route to class. Seventh, we developed large-scale events intended not only to educate students about physics but also to convey that physics can be fun and will help them pursue their passion for the “why.” These events further built up the department as an academic community, something previously lacking. Eighth, we sought coverage of the events by campus print media and local TV, knowing that changing an identity involves reaching prospective majors through as many channels as possible.

Clearly, efforts to promote an identity would be hollow without responding to critiques that students don’t see the connection between physics and everyday life or other careers. We therefore developed a freshman conference course that allowed students to read papers, meet faculty, and learn about careers. We held a Physics Department Open House, consisting of a poster session that was conducted by undergraduates in the lobby of the building, open tours of all the research labs in the building, and a measurement of the gravitational constant g made by dropping watermelons off the 9th and 17th floors of the building. The event drew over 600 students. We solicited student testimonials explaining their career choice and connection to physics, that we then gave out in all non-major physics classes (10,000 printed so far). We developed a sophomore/junior design class in which students collaborated on the design of a pico-satellite. We also constructed an undergraduate web page that prominently features student and alumni testimonials about physics and careers. We’re hoping to expand the number of degree plans available to include emphases on biophysics.

Similarly, efforts to draw students interested in the why would be futile without addressing the student concern that faculty have no passion for physics and don’t make connections to other careers in their classes. We shared this finding with faculty and asked them to talk about their passion for physics research, and make connections to other subjects.  We asked key faculty to teach introductory physics courses.  We developed a new modern physics course for 3rd semester (sophomores). We instituted a monthly student-faculty pizza lunch to encourage students to ask professors about their research and their interests in physics. Students in recent focus groups commented on how helpful the pizza sessions were in establishing personal relationships with physics faculty. We also set up a faculty team to hold mandatory advising sessions for every student every semester.

In parallel, we set out to address student concerns that they feel lost in a sea of complicated calculations and classes. We instituted a peer teaching assistant program using a model promoted by the University of Colorado in lower-division courses. We created a weekly study night led by senior physics students open to all students in any physics class. We instituted faculty-led recitation sections for upper-division classes. We also recognized that surviving through classroom struggles is often aided by opportunities to have fun with their peers, effectively building the identity of a physics community. In addition to dropping watermelons off the building, we held Science Movie nights, a public lecture about the movie Angels and Demons (which features the CERN Large Hadron Collider), and we hosted a concert by the group ArcAttack attended by over 1500 students, which featured giant “singing” Tesla Coils utilized like synthesizers whilst zapping one of the performers in a chain mail Faraday suit. Really.

Looking ahead, we are expanding our effort to area high schools.  Students in focus groups reported liking their high school physics classes, and on that basis choosing engineering majors in college. Why? Because some fraction of high school teachers, counselors, and parents convey the messages that engineering degrees are more practical and lead to better paying jobs. Students reported receiving visits to their high school physics and math classes from engineering schools. The absence of any visits from physics departments simply didn’t raise their awareness of our field as a possible discipline of study. We hope the same literature and events used to impact the college students’ choices could in fact have impacts on high school students.

We have indications these strategies are working. First, recent focus groups of junior/senior physics majors suggest they perceive faculty are concerned about student success. Further, they recognize one of the values of the department as being a small, tight-knit academic community situated within a large university. Together with a renewed sense of commitment between the department and the students that physics is a discipline that will teach them to think and ask ‘why,’ that academic community has led to a visible sense of identity and pride within students about their major. Recent focus groups of freshmen show that they believe the department to have some of the best teaching they’ve ever experienced; furthermore, they expect such because UT’s reputation as a research university translates to an expectation of teaching. Student attitudes have changed dramatically in one year. Perhaps most significantly, the number of students declaring physics as their major has gone from 215 to 268 in just one year. In the UTeach teacher preparation program, the number of physics teachers has gone from a typical 2 per year to 16 this year. These gains are due both to improved retention and to the attraction of students from other majors. We don’t know how many of these new majors will make it to graduation, but the increase is significant and larger than increases in other departments in the College. Strategies to embrace and promote an identity, combined with changes in the academic program, clearly work.

Yet, these exciting prospects yield their own challenges.  Increased enrollments in lower-division physics require increased TA support. Upper division courses are increasing as well, by as much as double. Increased class sizes will require changing techniques for faculty-student interaction. The newly-recruited students will bring varying expectations for physics courses because many of them don’t intend to do graduate study in physics, and faculty will have to respond to this diversity of expectations. But such challenges are worth the effort if the result is to reinvigorate our field with a broader cadre of students who will lead the field toward new ideas and directions. This broader cadre with diverse interests embodies precisely the core principle that we believe about physics:  it is a skill set that teaches students how to think and enables scientific inquiry into a broad range of problems.

Sacha Kopp is Associate Professor of Physics at the University of Texas, Austin.