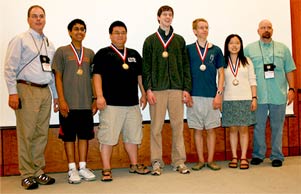 The five high school students that will represent the United States at this year’s International Physics Olympiad have been selected. Over ten days in late May, twenty students trained hard in a wide range of physics disciplines at the University of Maryland, each hoping to land one of the coveted spots on the Traveling Team. Though only five will travel to the competition held this year in Zagreb Croatia, all twenty students are considered a part of the United States team.

“All twenty students who participated in the training camp are champions. They have tested themselves with the best of their peers for ten days and have proven to be an exceptional group of young people,” said Warren Hein, executive officer of the American Association of Physics Teachers (AAPT). “We are proud of them all and are confident that the five Traveling Team members will continue the tradition of success for the United States as they represent the US Physics Team in Zagreb.”

For these students, physics is more than a subject in school, it’s a real passion.

“I’m happy to learn more,” said Jenny Lu, “I really like problem solving in general… being able to look at a solution and see if it has a lot of applications.”

The Olympiad, now in its 41st year, is an international competition for high school students. Each year it brings together teams of the brightest physics and math students from around the world for a week of intense physics problems and labs. Over ninety national teams compete for gold, silver and bronze medals. Last year the United States placed second overall, tied with its best standing historically.

The competing students are given both theoretical exams and physical labs that touch on a wide range of physics subjects. The students are told generally what topics to study ahead of time, but exactly which will be featured on the exams is a closely guarded secret, kept from the students until the exams are passed out. After all the tests and labs are completed, all the coaches review the answers, and assign points to the responses for the final tabulation.

The Olympiad first started in Eastern Europe in 1967, before branching out to other nations in Europe in the 1970s, and later the rest of the world. The United States first participated in 1986, when three team members won bronze medals, the best any team had done at its debut. AAPT and the University of Maryland have organized and trained each US team since its inception. APS and the American Institute of Physics, along with more than a dozen other organizations, also sponsor the team.

Making the team is a major accomplishment. More than 4,000 students from over 350 schools across the country took the preliminary “F=ma Exam.” From there, 320 semifinalists were chosen, and had to pass through another round of more difficult testing. From these semifinalists the twenty students for the team were selected.

For the ten days that students are attending the training camp, they are worked hard. Almost every day is full of lectures, labs, and exams, from morning to late into the evening. One of the days was set aside for the students to go on a field trip to Capitol Hill. There the students got to meet Representatives Vernon Ehlers (R-MI), Bill Foster (D-IL), and Rush Holt (D-NJ), all of whom are physicists.

For the students selected to be on the traveling team, the end of camp doesn’t mean that their training is over. Each was given a packet of questions from past Olympiads, which they’re expected to complete in the 17 days between the end of camp and when the teams arrive in Croatia. The packet gives each student roughly 40 hours of work per week to keep them mentally in shape for the competition.

Though it’s an intense training schedule, the students who participate say they enjoy their time at the camp.

“Being with people that are so passionate about the subject is such a thrill,” said Christina Brasco, who just graduated from Weston High School in Weston, Connecticut and will be attending Yale in the fall, “I think the fact that everyone is so excited about being here has really brought us together.”

This atmosphere is something that the coaches intentionally sought to foster.

“Many of these students are absolutely the best physics and often the best math students, and here they’re among peers,” said head coach Paul Stanley “It’s OK to be a geeky physicist here.”

Though there are only limited slots open on the traveling team, the students don’t see themselves as competing against one another. The students all have vast amounts of physics knowledge, and part of the aim of the camp is to get the students to work together and teach each other as well as learning from the coaches.

“The peer group is very strong, I learned more from my peer group than my coaches,” said Brian Zhang, a junior at Gunn High School in Palo Alto, California.