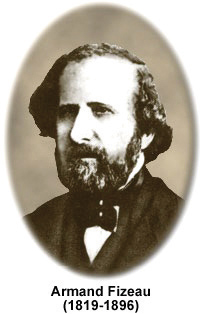 The speed of light is one of the most well-established values in physics, measured so accurately that the meter is now defined in terms of it. But before the 17th century, most scientists, including such giants as Johannes Kepler and Rene Descartes, considered the speed of light to be infinite, able to travel any distance instantaneously. Galileo Galilei was among the first to question this assumption and attempt to measure the speed of light experimentally.

By modern standards, Galileo’s methods were extremely crude. He stationed himself on one hilltop, and an assistant on a distant hilltop, each armed with a lamp that could be covered and uncovered at will. Galileo would uncover his lamp, and his assistant would do the same as soon as he observed the light from Galileo’s lamp. Knowing the distance between the two lamps, Galileo could measure how much time had elapsed between the two flashes to calculate the speed of light. Not surprisingly, his conclusion was rather vague and inconclusive: “If not instantaneous, it is extraordinarily rapid.” But he did conclude that light travels at least ten times faster than sound.

The first serious measurement of the speed of light occurred in 1676, when the Danish astronomer Ole Roemer observed the moons of Jupiter and noticed that their eclipses seemed to occur at different times, depending on the relative positions of Jupiter with respect to Earth, being late when Earth was far away, and early when Earth was closer to Jupiter. He correctly deduced that this effect wasn’t due to an actual shift in the moon’s orbits, but resulted because the light from those moons traveled a greater distance when Earth was farther away. He knew the accepted value for the diameter of Earth’s orbit at that time, and from that, he concluded that the speed of light was 240,000 kilometers per second.

Roemer’s measurement was still wide of the actual value, but it provided a useful baseline for future experiments. In 1728, an English physicist named James Bradley added his own findings to the accumulating body of knowledge, using stellar aberration to calculate the speed of light in a vacuum: in his case, 301,000 kilometers per second. The measurements were getting better. However, it would be another 100 years before a French scientist named Armand-Hippolyte-Louis Fizeau figured out how to measure the speed of light by means of a terrestrial experiment.

Born in Paris in 1819, Fizeau was the son of a physicist and professor of medicine, who left Fizeau a considerable fortune when he died. Free to pursue his interests without worrying about making a living, Fizeau focused on scientific research, initially intending to be a physician like his father, but ultimately choosing to study astronomy with Francois Arago at the Paris Observatory, where he no doubt learned of prior attempts to measure the speed of light using astronomical phenomena.

His scientific interests were quite varied, however. For instance, in 1839, he developed a fascination with Daguerrotype photography–then quite new–and teamed up with fellow French scientist Jean-Bernard-Leon Foucault in adapting the process to astronomy. It took 10 years, but the two men eventually took the first detailed photographs of the surface of the sun in 1845.

His work with Foucault inspired Fizeau to attempt his own measurement of the speed of light. He built an apparatus in which a cogwheel and a mirror were placed eight kilometers apart, and then sent pulses of light between them. He would rotate the cogwheel and observe how fast the beam of light traveled between the cogs of the wheel and the distant mirror, observing that if he spun the wheel very fast, the reflection back from the mirror was obscured because the light had struck one of the cogs.

Fizeau suggested that the amount of time it took the wheel to move the width of a single cog was equivalent to how long it took for the light beam to travel to the mirror and back again. Since he knew how fast the cogwheel was rotating, and the width of a single cog, as well as the distance to the mirror, Fizeau was able to calculate the speed of light, obtaining the value 313,300 kilometers per second. This was still roughly 5% too high.

Foucault improved on Fizeau’s apparatus slightly, replacing the cogwheel with a rotating mirror–hence it is now known as the Fizeau-Foucault Apparatus. Light was reflected at different angles as the mirror rotated. Since both the speed of rotation and the distance to the mirror were well established, it was possible to measure the difference between the angle of the light as it entered the apparatus and when it exited the setup, and calculate the speed of light from that. Foucault concluded in 1862 that the speed of light was 299,796 kilometers per second.

Fizeau’s contributions to science are not limited to this speed-of-light measurement. Subsequent experiments in which he measured how light traveled through flowing liquid resulted in a surprising discovery: the velocity of light doesn’t change as expected when the medium it is passing through is in motion. Scientists had already determined that light traveled at varying speeds through different mediums, but until Fizeau’s experiments, they believed that if a medium was moving, the speed of light would be obtained by simply adding the velocity of the medium to that of the light. His results implied a different formula, which would later be explained by Albert Einstein as the latter was developing his theory of special relativity.

Subsequent methods to measure the speed of light, of which Albert Michelson was a prominent practitioner, relied on wave interference. These methods became increasingly accurate with the advent of laser technology, and today, over 350 years after Galileo’s hilltop experiment, the speed of light’s value is defined to be 299,792.458 kilometers per second, according to a 1983 declaration by the 17th General Congress on Weights and Measures, thereby rendering the meter a derived quantity. It only took some 163 separate experiments involving more than 100 scientists–testament to the collaborative nature of the scientific enterprise.