Physics on the (Dirt) Road in Kenya

After the Rain a Bus Slide 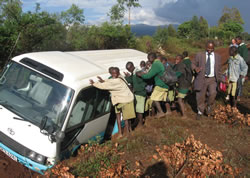 Photo by Chris DiscenzaPassing students gladly push the muddy bus back on to the road.

Ed. Note: Chris Discenza is the Public Outreach Specialist at APS. A picture from his trip to Kenya appeared in the Aug./Sept. 2009 issue of APS News; what follows is his personal account.

We approached the school cautiously over the thick dirt road. The Ontulili High School is located in the forest that rests in the shadow of Mt. Kenya. Although this wasn't the rainy season, there were scattered afternoon showers that flirted with the current drought. We knew that if it rained we would be stranded in the thick soil that formed the only road back into town. During our presentation to the students, rain started and continued to pour in an ironic response to our weather science demonstrations.

In July I traveled to Kenya with two colleagues: Sherri Heck, a research scientist from the National Center for Atmospheric Research (NCAR), and Cristina Pease from Pima Community College, who traveled with me on a physics bus around the US in previous years. Sherri was the mastermind behind the whole operation. She measures the carbon dioxide levels in rural areas around the world, and Mt. Kenya, on the equator, is an ideal spot for her instrument to collect data valuable for modeling the climate.

The trip to Kenya was funded by NCAR in support of Sherri’s research and included a science outreach component. Christina and I led the outreach program. We were also accompanied by Peter Bundi, Associate Director at the Kenyan Meteorological Department. He escorted us to different schools and enlightened us on current political events and cultural subtleties in Kenya.

We gave presentations on physics and weather science to students and teachers at eight schools around Mt. Kenya. The presentations for the students were motivational demonstration shows, while the meetings with the teachers functioned as workshops to demonstrate and explain experiments. Since many of these schools lack a budget for science materials,we brought a kit of sustainable materials to each school. Each kit consisted of reusable experiments, rechargeable batteries, and solar chargers for the batteries. Not only did this promote sustainability and alternative energy, it was a functional requirement for the rural schools. Many of the schools did not have electricity or running water.

We also brought Galileoscopes to each school, and many students and teachers saw the details of the moon for the first time. I imagine this might have been similar to the reaction Galileo received when he demonstrated the telescope 400 years ago. In addition, we were able to point to celestial objects with a green laser pointer, to their amazement.

Our school visits were extremely formal, a cultural influence remaining from British rule. It was also unusual for them to have American visitors, and we were treated as ambassadors. The formality followed the same rituals at every school. We were always invited to the principal’s office for tea and lunch. Kenyan tea is one of their proudest drinks and it is always steeped in hot milk. The lunch typically consisted of rice with a beef stew–flavorful, but not as exotic as an American might imagine.

The schools lacked computer labs and advanced equipment–the average classroom contained only desks and a blackboard. Often the walls were not even painted. Interestingly enough, the level of education at these schools was extremely high–the students were very focused and the teachers were highly educated.  The muted colors of unfinished walls were a beautiful contrast with the students’ bright matching uniforms.

At the end of our presentation we always took a moment for questions. An awkward silence would pass and then a student would casually emerge from the crowd and hand me a handful of torn paper slips. Each slip had a question.

• Is the physics here and in the USA the same?
• Do students in the USA do quantum physics?
• What is the function of a Galileoscope?
• Can a photo-electric cell be used to measure the threshold wavelength of the infrared and ultraviolet rays?
• What were you demonstrating when you used the yo-yo?

After reading the last question, I realized that this was the first time these students had seen a yo-yo. In fact they all laughed at the name. I worried that the word “yo-yo” was Swahili or slang for something other than physics. I also had a similar experience when I demonstrated the right hand rule for the Lorentz force. Luckily, my gesture was not perceived as lewd, but they thought I was joking. They learn what is called “Flemming’s left hand rule” for the same phenomenon. Many students and teachers also asked what happened to Pluto as if it was destroyed or had disappeared. This made me realize some of the challenges of communicating science internationally and the benefits of having face-to-face discussions about science.

After our presentation to the to students, the rain continued to pour. We decided to try our luck with the bus on the muddy road in hopes that the rain had not yet penetrated the soil. We drove at a walking pace as the bus occasionally drifted in the mud. Our luck lasted for a half of a mile before the bus gently slid into the embankment like a kiss on the cheek. We were stuck. The rain promptly ended but the mud remained. We called for backup. Backup was a Land Rover used to shuttle Sherri and her instrument up the mountain. It would take over an hour to rescue us. Of the many problems that arise from getting stuck in the middle of the forest, making a call was not one of them. Ironically there is cell phone service everywhere in Kenya: the forest, the city, on safari, and even on Mt. Kenya. As we waited for backup, a herd of primary school students were making their way home. Many of them were barefoot (I have to admit I did fantasize squishing my toes into the soft mud). The students gathered around our curious predicament. Since they had not studied English, Christina had difficulty communicating with them. However, I could understand that they were making fun of the mud caked on my nice shoes. They told Peter that they could push the bus out of the mud. At first he was reluctant, but they quickly crowded behind the bus and demonstrated their power. Sure enough, they pushed the bus from the embankment and onto the road. In the meantime many of the girls were inspecting Christina’s black dyed hair. I decided to teach the kids how to high five. I’m not sure if a high five will inspire the youth in Kenya, but it is a successful method of communication while stuck in the mud.