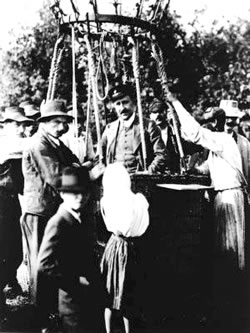 Today we take it for granted that Earth’s atmosphere is constantly bombarded by high-energy cosmic rays originating far outside our solar system. But such was not always the case. It was a 29-year-old Austrian physicist named Victor Hess who officially “discovered” cosmic rays, and went on to devote an illustrious scientific career to studying the effects of radiation on the human body.

Born in Austria in June 1883, Hess was the son of the chief forester for the estate of Prince Oettingen-Wallerstein. He attended the University of Graz in 1901 and earned his PhD at 23. Hess initially planned to study optics under famed physicist Paul Drude, the man who gave physics the symbol c for the speed of light. Tragically, Drude committed suicide weeks before Hess was due to arrive.

The young Victor wound up accepting a position at the University of Vienna instead, studying under Franz Exner, an early pioneer in the study of radiation. Under Exner’s tutelage, Hess began studying radioactivity and atmospheric electricity. It was during his work as an assistant at the Institute for Radium Research at the Austrian Academy of Sciences that Hess became intrigued by frequent reports of electrical charges being detected inside electroscopes–no matter how well those containers were insulated. Most scientists at the time believed the source of the ionization to be terrestrial in nature–radioactivity from ground minerals–and postulated that the ionization measured in the atmosphere therefore would decrease the further one got from the ground.

Prior experiments with electroscopes gave rough estimates of ionization levels in the atmosphere, but those results seemed to indicate that the levels might actually increase beyond a certain altitude. For instance, in 1910, Theodore Wulf measured ionization at both the bottom and top of the Eiffel Tower in Paris, and found that there was far more ionization at 300 feet (the top) than one would expect if this effect were solely attributable to ground radiation. Other scientists mounted their instruments on balloons to record ionization at higher levels, but their results were inconclusive due to instrumentation defects.

Speculating that perhaps the main source of the ionization could be in the sky rather than the ground, Hess tackled the problem first by designing instruments that could withstand the temperature and pressure changes at higher altitudes. He also determined that ground radiation would no longer produce ionization at 500 meters.

Hess then mounted his instrumentation on a balloon and made ten separate ascents over the course of three years (1911-1913), measuring ionization levels. He found that initially ionization fell off with height, and then began to rise rapidly. At a height of several miles, the ionization was several times greater than that at Earth’s surface. Hess concluded that “a radiation of very high penetrating power enters our atmosphere from above.”

Another clinching piece of evidence came during Hess’s ascent on April 17, 1912, during a near-total eclipse of the sun. Since the ionization did not decrease during the eclipse, Hess concluded that the source of the radiation could not be the sun itself; it had to be coming from further out in space. Hess’s findings were confirmed in 1925 by Robert Millikan, who dubbed the mysterious radiation “cosmic rays.” Hess shared the 1936 Nobel Prize in Physics for this discovery, along with Carl D. Anderson, who discovered the positron.

There is an interesting twist to Hess’s Nobel story. In February 2010, Italian physicist Alessandro de Angelis of the University of Udine published a paper on the arXiv, claiming that Hess should not be solely credited with the discovery of cosmic rays. De Angelis pointed out that another scientist, Domenico Pacini, made the same discovery right around the same time. Pacini didn’t use a balloon to measure changing radiation levels in the atmosphere. Instead, he went underwater, placing his instrument in a copper box and sinking it in the Bay of Livorno. His results: the radiation measured was significantly less than at the surface, so the Earth’s crust could not be the source of cosmic rays.

De Angelis offered the very first English translation of Pacini’s paper on this experiment, and pointed out that Hess and Pacini knew of each other’s work. So why do we remember Hess, and not Pacini? Chalk it up to an unfortunate twist of fate. Pacini passed away in 1934 and the Nobel Prize cannot be awarded posthumously. So Hess alone was honored for cosmic rays.

Two years after Hess received the Nobel Prize, the Nazis invaded Austria and Hess was abruptly dismissed from his post as professor of physics at the University of Graz, in part because his wife was Jewish, and in part because he had been a scientific representative in the independent government of Chancellor Kurt von Schuschnigg. Warned by a sympathetic Gestapo officer that he and his wife would be sent to a concentration camp if they stayed in Austria, the couple fled to Switzerland.

Hess immigrated to the US to become a professor at Fordham University. He participated in the first tests for radioactive fallout less than a year after the atomic bomb was dropped on Hiroshima, many conducted from the 87th floor of the Empire State Building in New York City. The following year found Hess in the bowels of Manhattan, measuring the radioactivity of granite in the 190th Street subway station near Fort Tryon.

Along with William T. McNiff, Hess developed “an integrating gamma ray method” for detecting minute traces of radium in the human body, thereby making it possible to determine if someone was suffering from radium poisoning before it became critical.

Even after retiring from Fordham, Hess continued to do research. He was keenly interested in creating a more accurate scale of how much radioactivity the human body could tolerate–a difficult thing to determine, since individuals could tolerate different levels, and because the effects were often cumulative, taking as along as 50 years to fully present. He strongly opposed nuclear testing, claiming, “We know too little about radioactivity at this time to state definitely that testing underground or above the atmosphere will have no effect on the human body.”

Hess died on December 17, 1964, but his legacy lives on. In 2004, an observatory opened in the deserts of Namibia to detect gamma rays from cosmic sources. It was named the High Energy Stereoscopic System (HESS) telescope, in homage to the man who discovered cosmic rays.