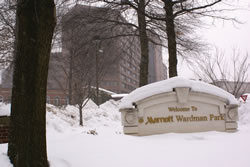 Photo by Michael Lucibella/APS
The record amounts of snow falling on Washington DC just days earlier had little effect on the joint APS “April” Meeting and AAPT Winter Meeting held in the city.

The two snowstorms, locally dubbed “Snowmageddon” and “Snowverkill,” walloped the DC region with over 38 inches of the white stuff in just six days. This made it the snowiest winter in the nation’s capital, closing the federal government for an unprecedented four and a half days.

But even with the snowstorms and a further dusting on Monday, the joint APS/AAPT meeting went on almost as expected. The snow did slightly delay the start of an affiliated conference of the Physics Teacher Education Coalition (PTEC) and force cancellation of Friday’s Professional Skills Development Workshop and High School Teachers Day. Continued efforts by the local department of transportation to remove snow drifts snarled traffic all around the city throughout the weekend of the meeting.

However, nearly all of the scheduled sessions and events from Saturday forward went ahead with only minimal interruption. Preliminary attendance numbers available at press time indicate that the number of people forced to cancel their plans to attend the meeting was surprisingly small.

Most meeting attendees said that overall the snow had little impact on them.

“I don’t think it’s really affected [the meeting] too much. We’re from Michigan so we’re pretty used to this,” said Aaron Siebold at the Andrews University Physics Enterprises Booth, “We were kind of surprised at how they didn’t know how to clear the streets around here.”

Donald Koetke from Valparaiso University reflected this sentiment, “You’ve got to be very careful when you’re out walking, but we got in with no problem.”

Others, however, were more averse to the wintery conditions.

“I’m from Texas and we don’t do snow,” said Toni Sauncy, president of the Society of Physics Students, “I brought a gigantic grizzly coat because I was afraid of the snow, and I didn’t leave the hotel for three days.”