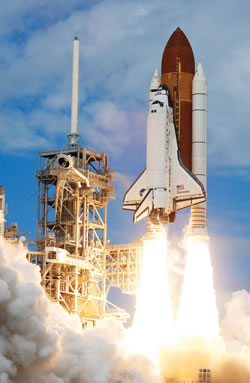 In October, APS News reported how the United States Air Force is restricting the use of laser guide star adaptive optics. Observatories that use these high powered lasers to filter out atmospheric interference have to have their observation plans approved days in advance by the Air Force’s Laser Clearing House so no beams inadvertently hit a passing satellite.

Since then additional information about efforts to ease the restrictions has come to light, as well as little-known instances nearly thirty years ago when the Soviet Union tracked US spacecraft with ground based lasers.

All of the scientists and officials interviewed in October’s article said that they knew of no instances where a laser hit a passing spacecraft. However a search of NASA’s historical archives turned up several instance in the late 1970s and 1980s where satellites and even the Space Shuttle were tracked by Soviet ground based lasers.

During the Cold War, the Soviet Union worked to develop an anti-satellite weapon using powerful lasers at the Sary Shagan research complex in Eastern Kazakhstan. The laser they developed, known as Terra-3, was never powerful enough to shoot an orbiting space craft out of the sky, but could have damaged sensitive onboard optical equipment. Accounts as early as 1975 reported that the Soviet Union was using the red and infrared lasers at the complex to track the positions of passing satellites, occasionally interfering with infrared sensors. The Department of Defense denied those claims at the time; however after the breakup of the Soviet Union, accounts emerged in both the US and Russian media from those involved that seemed to confirm the events.

Concerns that the Space Shuttle would be used for reconnaissance led the the Soviet Minister of Defense, Dmitry Ustinov, to first ask in the fall of 1983 that the lasers at Sary Shagan be used to track the Space Shuttle. One year later, on October 10th 1984, the Terra-3 laser was trained on the Space Shuttle Challenger as it passed over the complex. The laser was set to its low power tracking setting. The United States government filed a formal diplomatic complaint with the Soviet Union.

Some early accounts of the incident reported that the lasing disrupted communications onboard, and caused discomfort among the crew including temporary blindness. However Payload Commander Kathryn Sullivan and Payload Specialist Marc Garneau both said that there were no such disruptions on board the flight, and the crew was apparently unaware of the event at the time.

Current Efforts
Paul Kintner of Cornell saw the original article in APS News, and has decided to pursue the subject at the State Department. He is currently spending a year there as part of the Jefferson Science Fellowship. The fellowship brings tenured scientists into the Agency for International Development for a year to advise on defense policy and technical issues.  These subjects generally include policy concerns over global positioning and navigation systems, space weather, space debris and communications issues.

In an interview with APS News, Kintner said that he wanted to focus also on the restrictions placed on the use of laser guide stars. He expressed concern at the prospect that the restrictions could hurt the US’s scientific competitive edge.

“When we saw your article, sort of a light bulb went off over our heads,” Kintner said, “There’s sort of a broad confluence that…says this should be part of the discussion.”

Leaders of the scientific communities in the United States and the European Union are starting discussions about the long term sustainability of satellite infrastructure. The nations hope to identify potential dangers to the network and come up with ways to protect the orbiting infrastructure. Kintner said he plans to bring up the issue of laser guide stars with the nations at a meeting of Europe’s scientific leaders this month.

He said he would not seek to bring European and other nations under the regulation of the Laser Clearing House. Instead he hopes that by raising the issue there, the nations can work together to come up with some kind of multinational system less restrictive than the Laser Clearing House to protect orbiting spacecraft from any accidental damage.

Kintner said also that part of his work would be to find out how serious a threat lasers actually pose to orbiting spacecraft. Right now there are no definitive studies evaluating the likelihood of a satellite randomly running into a beam, and what would happen if it did.

Astronomers are not the only scientists to use lasers that fall under the purview of the Laser Clearing House. Researchers studying high atmosphere winds and other weather conditions likewise track atmospheric distortions using high powered lasers. Gary Swenson of the University of Illinois at Urbana-Champaign has been developing tools to study the turbulent upper atmosphere. He said that while the restrictions weren’t hindering research, the restrictions were a nuisance.

“We’re putting quite a bit of time into making sure we can shut our beam down,” Swenson said, “It becomes a cost for us, we have to put extra time into these nuisance factors.”

In addition, he said that the additional time and paperwork needed to secure permission to use the laser was cumbersome. It takes several months to register a laser with the Laser Clearing House. Once registered, they have to fill out requests days in advance for each use, call in and double check if there have been any changes fifteen minutes before switching on the laser and put together a follow-up report each night. They have also had to develop software to account for any interruptions. He said that without more information from the Clearing House, there would likely be no way to avoid these interruptions. With more information, it might be possible to plan observations that would avoid any passing satellites.