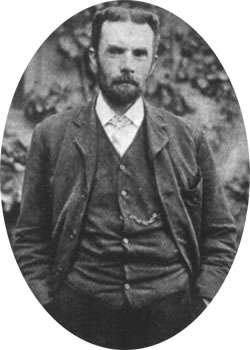 
Physicists routinely employ a handy mathematical device known as the Heaviside step function, particularly in control theory and signal processing, where it represents a signal that switches on at a specified time and stays on indefinitely. It is named after the English polymath Oliver Heaviside. While the Heaviside step function is well-known in scientific circles, it is probably one of his least innovative contributions to 19th century mathematics and science, as he toiled in relative obscurity and enjoyed little recognition in his lifetime.

A product of Camden Town–the London slum that also produced Charles Dickens–the red-haired, diminutive Heaviside was one of four sons of a wood engraver and water color artist named Thomas Heaviside. Young Oliver fell ill with scarlet fever as a child, which left him partially deaf. His social skills seem to have suffered as a result: he did not get along with the other children at school in Camden Town, although he was a top student in every subject save geometry. Perhaps traditional education simply couldn’t contain his eccentric genius: he dropped out at 16 to continue his schooling at home.

It helped that his uncle was Sir Charles Wheatstone, who co-invented the telegraph in the 1830s and was a recognized expert in telegraphy and the relatively new field of electromagnetism. Within two years, young Oliver found himself working as a telegraph operator, first in Denmark and then in Newcastle upon Tyne. He quickly advanced to chief operator for the Great Northern Telegraph Company. It was the only full-time employment he ever experienced.

Heaviside discovered James Clerk Maxwell’s seminal Treatise on Electricity and Magnetism in 1873, and was so enthralled by the work that he quit his job the following year to devote himself to studying it full-time, moving back into his parents’ home in London. Despite his lack of knowledge beyond algebra and trigonometry, he soon grasped the essential points. Then “I set Maxwell aside and followed my own course, and I progressed much more quickly,” Heaviside later recalled. In the end, he reduced Maxwell’s equations from 20 equations in 20 variables, down to four vector equations in two variables. Those four equations, as every physicist now learns, describe the nature of static and moving electric charges and magnetic dipoles, as well as electromagnetic induction.

In addition to the step function and vital contributions to the development of vector calculus, between 1880 and 1887, Heaviside also developed operational calculus, enabling him to solve differential equations by turning them into algebraic equations. He did this by replacing the traditional differential operator with a variable (p). Once it was solved, the algebraic solution could be transformed back with the help of conversion tables to yield the solution to the original differential equation.

This particular breakthrough was controversial at the time, in part because Heaviside did not show his derivations. A paper on the subject that he submitted to the Proceedings of the Royal Society was rejected on those grounds. Heaviside didn’t like constructing rigorous mathematical proofs, once famously declaring, “Mathematics is an experimental science, and definitions do not come first, but later on.” On another occasion, he opined, “I do not refuse my dinner simply because I do not understand the process of digestion.”
Heaviside’s early employment as a telegraph operator also informed his research. For instance, he helped develop transmission line theory (the so-called “telegrapher’s equations”), demonstrating mathematically that if one could distribute inductance in a telegraph line uniformly, this would cut down on the attenuation and distortion of the signal. In fact, if the resistance wasn’t too great, there would be no distortion in the circuit at all and currents of all frequencies could propagate at the same speeds.

Based on this work, in 1887, he proposed that the use of induction coils placed at regular intervals along telephone lines could produce that uniform inductance and thus greatly decrease the amount of distortion of signals transmitted along the lines. But Heaviside never patented his idea after his paper appeared in The Electrician. Years later, Michael Pupin of Columbia University and AT&T’s George Campbell built upon Heaviside’s earlier work. Pupin was awarded the patent in 1904. He offered to share the proceeds with Heaviside, but the latter man refused unless AT&T also gave him full recognition for the innovative idea–even though he was nearly destitute by this point.

Perhaps his best known achievement, apart from the step function, is the prediction that Earth’s atmosphere had an ionized reflective layer capable of bouncing radio signals back to Earth, such that the radio signals followed Earth’s curvature. His hunch proved correct when it was experimentally verified in 1923 by transmitting radio pulses vertically and receiving the returning signals from the reflecting layer. This is now known as the Kennelly-Heaviside Layer in his honor. Composer Andrew Lloyd Webber immortalized this discovery in his musical Cats, based on the poetry of T.S. Eliot: “Up, up, up past the Russell hotel/ Up, up, up to the Heaviside layer…”

Despite his election as a Fellow of the Royal Society in 1891, and an honorary doctorate from the University of Gottingen in 1905, Heaviside never gained the recognition he deserved for his many accomplishments during his lifetime, about which he was justly bitter. He became quite eccentric in his later years, spending the last two decades of his life as a virtual recluse in Torquay near Devon, plagued by bouts of jaundice and the tormenting of neighborhood children, who threw stones at his window and scrawled graffiti on his front gate.

Neighbors reported that his home was furnished primarily with huge granite blocks. Otherwise scruffy and unkempt, he took to painting his impeccably manicured fingernails bright pink, and signing letters with the mysterious initials “W.O.R.M.” after his name. He died on February 3, 1925, at home in Torquay on Devon, and is buried in Paignton cemetery in England–unsung, but not entirely forgotten.