The next "April" Meeting is just around the corner, convening this year in Washington, DC from February 13th to the 17th, coinciding with the annual winter meeting of the American Association of Physics Teachers. The April Meeting will bring together over 2,000 physicists, highlighting the latest particle, plasma, nuclear, and astrophysics research, with over 75 invited sessions, more than 100 contributed sessions and four poster sessions. 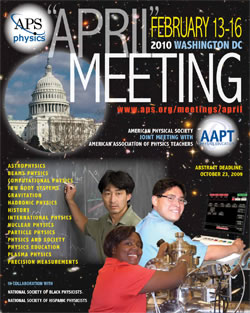 
LaserFest. In 2010, to mark the fiftieth anniversary of the invention of the laser, APS has partnered with the OSA, IEEE Photonics and SPIE to sponsor the yearlong celebration LaserFest, which kicks off at the meeting. Events include a booth to promote the many events throughout the year, a special kick-off ceremony and a laser-themed public lecture. Nobel laureate and Director of the Max Planck Institute für Quantenoptik, Theodor Hänsch, will present his public lecture titled “From Edible Lasers to the Search for Earth-like Planets–Five Decades of Laser Spectroscopy.” The talk will highlight how over the last 50 years, lasers have gone from a “solution in search of a problem” to an indispensable tool for scientists. Hänsch won the 2005 Nobel Prize in physics for his work developing the optical frequency comb technique, which measures the frequency of light waves to extraordinary precision.

Other sessions as well will demonstrate the importance of lasers in physics. Session X4 highlights how lasers revolutionized many precision instruments. J.A. Giordmaine of NEC Laboratories America will recount the invention of the original ruby laser in 1960. Federico Capasso of Harvard University will describe how Quantum Cascade Lasers, invented in 1994, have found uses in applications such as spectroscopy, trace gas analysis, and atmospheric chemistry. The third talk will further look at how Hänsch’s optical comb technique dramatically improved the accuracy of nearly all known optical frequency standards.

Plenary Sessions. The three plenary sessions (E1, N1, V1) this year will feature nine leading physicists expounding some of today’s most important topics in physics. John Carlstrom of the Kavli Institute will speak on the cosmic microwave background. Rob Roser of Fermilab will give an update on the search for the Higgs boson at the Tevatron collider. Naomi Makins from the University of Illinois at Urbana-Champaign will bring everyone up to speed on the latest work to unravel the nucleon spin puzzle. Retired chairman of the Lockheed Martin Company, Norman Augustine will speak about the future of NASA’s space program.

Judith Lean from the Naval Research Laboratory in Washington will present an overview of how Earth’s climate has changed throughout history, and what effects the current increase in average global temperature might have on the world. William Borucki of NASA’s Ames Research labs will update attendees on the Kepler mission’s search for Earth-like extrasolar planets.

The Large Hadron Collider. Kicking off the April Meeting will be a session (A1) devoted to the latest information coming out of CERN as the LHC continues increasing its beam intensity. The meeting will also feature sessions (B9, D9, P12) with some of the first scientific results from these early collisions.

Physics and Secrecy. From the early days of the Manhattan Project to modern military institutions, secrecy has always been a part of modern physics research. A constant question is when is secrecy necessary to national security and when does it inhibit scientific discovery? At session B5, Peter Galison, historian of physics at Harvard University, will explore how the legacy of secrecy surrounding physics research during the Cold War manifests itself in this post-Cold War world. Steven Aftergood, of the Federation of American Scientists, will highlight recent controversies when nuclear research was released to the public. William Happer of Princeton will delve into how balances are struck between the national security need for secrecy and the scientific need for openness.

Powerful Emissions from Massive Galaxies. In recent years, astronomers discovered that massive radio galaxies broadcast more than just radio waves. Energy emissions from their giant lobes show that they act as efficient particle accelerators. Lukasz Stawarz of Stanford University will present the current understanding of the extraordinary environs inside of these lobes that produce the highest energy cosmic rays ever detected (H3.3). Using data taken from the Chandra X-ray Observatory, the Pierre Auger Observatory, and the Fermi Gamma-Ray Telescope, Stawarz will explain how particles inside these active lobes accelerate to the ultrarelativistic speeds required to produce these intense cosmic rays.

The Sounds of the Little Bang. Ever wonder what it sounds like when large nuclei collide inside of a particle accelerator? Agnes Mocsy of the Pratt Institute will show how it is possible to “hear” colliding particles (Y14.7). When two high-speed nuclei collide, they form a small cloud of matter through which acoustic waves propagate. By analyzing these acoustic signatures and shifting their frequencies into an audible range, it is possible to recreate what it sounds like when two particles collide.

Balloon Listens to South Pole Radio. Ultrahigh energy neutrinos are elusive particles. They are thought to form in distant galaxies when cosmic rays collide with the cosmic microwave background, but detecting them is extraordinarily difficult. Once in a while, one interacts with an atom in ice and releases a telltale radio signal. In 2008 the ANITA Long Duration Balloon flew a flight over Antarctica listening for these radio signals, essentially turning the icy continent into a gigantic neutrino detector. Stephen Hoover of UCLA will present the latest results of these balloon flights.

Getting a Look at the Galactic Black Hole. Most astronomers believe that at the heart of the Milky Way Galaxy lies a tremendous black hole many thousands or even millions of times more massive than the Sun. Laleh Sadeghian and Clifford Will of Washington University in their session (H14.6) lay out exactly what kinds of observations are needed to prove the existence of such a massive central black hole beyond any doubt. Other sessions (D4) also look at what strange physics may lurk around this gravitational behemoth. David Merritt of Rochester Institute of Technology will show how tracking the motion of nearby stars can offer insights into the strong field gravity near the black hole. Sheperd Doeleman will show how astronomers are getting very close to being able to observe a black hole’s event horizon using a technique called very long baseline interferometry. Avery Broderick of the Canadian Institute for Theoretical Astrophysics will describe what a super massive black hole would look like using the VLBI technique.

Tornado Tracks. Tornados are both devastating and short lived. Some reach wind speeds of over 300 miles per hour, leveling everything in their path. However it is often difficult to determine after the fact exactly how powerful a tornado was. Michael Zimmerman and David Lewellen of West Virginia University developed a 3D computer simulation of a tornado’s debris cloud. Using this model, Zimmerman and Lewellen can recreate a debris trail left by tornados of different strength. The team hopes that scientists in the field will be able to use these simulations to gauge the strength of a tornado after it dissipates by looking at the trail of debris it left behind.

Enrico Fermi as a Mentor. This year, renowned physicists are coming together to celebrate the inspiration Enrico Fermi had on an entire generation of physicists (J1). In a session chaired by Nobel Laureate James Cronin, three eminent physicists remember their time spent with one of the most distinguished physicists of the twentieth century. One of Fermi’s students at University of Chicago, Nobel Laureate Tsung-Dao Lee of Columbia University, recalls Fermi’s early days at Chicago. Richard Garwin shares his experiences of working with Fermi to develop the hydrogen bomb at Los Alamos. Nobel Laureate Jerome Friedman of MIT was also a student of Fermi’s at Chicago and recalls his time spent with him in the early 1950s.