The Auto Industry’s a Deal for Physicists 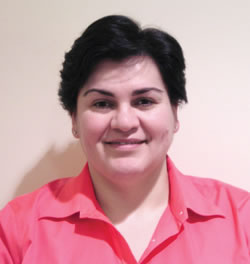 Bita Ghaffari went into the auto industry following her postdoc because she wanted to make an impact. “What I do,” says the Technical Expert at Ford Motor Company’s Research and Advanced Engineering (R & A) division, “is a small part of larger projects that can ultimately affect a lot of people.”

She studied atomic physics as a graduate student at the University of Michigan and counts her PhD research, in which she discovered chaotic transport in certain classes of charged particle traps, as her greatest professional moment so far. In fact she won the 1998 APS Outstanding Doctoral Thesis Research in Beam Physics Award.

And yet, in the years she spent completing her postdoc, she found she wanted to go beyond atomic physics. A major issue was what she felt was a lack of influence she could have over a significant percentage of the population with her pursuits. “When you’re doing anti-matter work, there are maybe five people in the world who really care about what you do,” Ghaffari jokingly describes. “I became interested in the impact part” of physics research, she says, and she thought industry in general, and the auto sector specifically, would give her the opportunity to provide a contribution on a grander scale. She was right.

An employee of the company for ten years, she has worked on two major research goals: creating non-destructive tests to find defects in parts as they roll off the assembly line, and strengthening alloys that are used to make engines and other vehicle components.

She spent her first eight years of research at Ford involved in the former. As parts come off the assembly line, invariably, “some don’t meet the required specifications” in various categories, such as mechanical dimensions, surface hardness, tensile strength, and even color, she reports. The key is to create ways in which one can examine the parts, to ensure quality, without destroying them. Her research in ultrasonics and other imaging processes led to the development of techniques and instruments that could be used by plant workers, who might not have technical backgrounds, to test various parts for imperfections while maintaining the integrity of the part itself.

Another element of her ultrasonics work was detailed materials characterization to experimentally confirm Computer-Aided Engineering (CAE) models of automotive parts. The importance of computational methods in manufacturing cannot be overstated, says Ghaffari. It takes years to get a car from “concept to assembly,” she explains. “If you can predict it before you build it, you save time and money…If you can shave off even a month in the process of designing and developing a car, that’s the Holy Grail.”

The testing research she and her colleagues at Ford conducted made an impact, she says. The work on non-destructive testing of spot welds, which are used to join the various body structure panels of the vehicle, led to improvement in spot-weld quality in cars. “[This] can reduce the noise and vibration of the ride,” she affirms.

For the last two years, Ghaffari has endeavored in R & A’s department of Materials and Processes to better understand how the alloys that are used to construct engines, body structures, and other vital auto parts can be made stronger. The metals, which include aluminum alloys and magnesium alloys, “are not as strong as we want them to be,” she says. “There are microscopic particles inside many important alloy(s) that impart various properties to the metals, for example, great strength.” Ghaffari’s job is to examine these particles to understand how they form inside the alloys and how the particles and the alloys themselves respond to various operating conditions such as strain, fatigue, and intense heat.

She is one of the few theorists in R & A and “never in a million years did I expect to do theory,” she admits. Her work is critical and her physics background is essential–she employs Density Functional Theory to conduct First-Principles calculations of some alloy properties, which are then used to construct thermodynamic models and ultimately micromechanical models to predict various mechanical aspects of the alloys, she says. 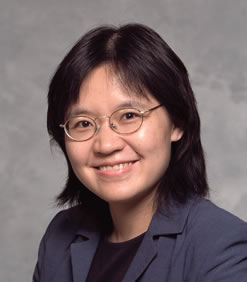 Yue Qi, a Staff Research Scientist at General Motors, started in the industry in 2001, fresh from obtaining her PhD in materials science at Caltech. She had completed an internship at the company while a graduate student and liked what she saw. Although she has no degree in physics, she quips that she “pretends to be a physicist.” In reality, however, all of her research at GM is physics-related (and, by the way, she is a member of the APS).

Her work in the global R and D division focuses on computational materials science. She examines the grain boundary structures of aluminum panels to find ways to improve them for strength and flexibility. She is also involved in projects pertaining to energy. “I model the nanoscale morphology of proton exchange membranes [in fuel cells] to improve both proton conductivity and mechanical durability,” Qi says. This is a difficult challenge, as usually both conductivity and durability cannot be achieved together. Typically she and her team are able to improve one property while sacrificing another, she explains. She also researches Lithium-ion batteries, to try “to understand how batteries fail so we can make them last longer and be safer,” she says.

Qi’s most thrilling project? “All of them,” she laughs. “If I didn’t find them exciting, I wouldn’t do it.”

At Ford, Ghaffari delights in her ability to move from project to project. One doesn’t have that possibility in academia, she recognizes. This freedom to engage in different areas of research in the auto industry is one reason why she feels that her greatest impact “will come in the future, as the projects are long term,” she asserts.

Qi likes the intellectual stimulation she gets from her research at GM, as well as another type of freedom. “GM provides me the opportunity to be a scientist and a mom,” she says. The company allows its employees to create work-life balances that fit each person’s lifestyles. In Qi’s case, she works 7:00 a.m. to 3:30 p.m. during the week, which permits her to spend essential time with her kids.

Qi argues that the auto industry, and in particular GM, is a great environment for physicists because “it bridges science and engineering,” she says. “We are always looking for long-term solutions…so we have to keep developing new materials.”

Both women realize there are a number of misunderstood aspects of the auto industry. When Ghaffari first started at Ford, she was surprised to learn of the rigorous scientific research being carried out. “There is really nice scientific work being done (here),” she says. One might think that Ford is only interested in pushing “tried and true” solutions, but that is a false assumption, she continues. “We are pushing the boundaries of how First-Principles calculations can model real materials,…really doing front of the line work, for example, on alloys.” And publication is not a foreign concept nor is it forbidden (in many circumstances) in the industry, both professionals attest.

Another feature of the auto industry that is often misinterpreted relates to fuel economy. “I don’t think people realize how hard we try to increase the fuel economy,” she says. “Some people may think we have a backroom with a 100 mile per gallon car…(but) we’re not holding back on anything. There’s no secret…we’re keeping.” It’s a tricky problem, as fuel economy is directly related to the weight and performance of the vehicle.

Ghaffari’s physics background differs from that of most of her colleagues, who graduated from engineering programs. In fact, of the roughly 600 people working in Ford’s R & A division, she is one of only a handful of scientists she knows who has a PhD in physics. Similarly, Qi says there are few physicists she can think of at GM. But both pros contend that physicists and physics research are essential to the success of the auto industry.

Ghaffari stresses that her scientific diversity gives her an advantage in the sector. “I can see things differently and I can ask questions that are sometimes…very good questions” that may appear naïve, she says. This stimulates problem-solving in new directions. “You have to be able to communicate with people who don’t have the same terminology as you,” she adds. “Physicists can do this.”

Furthermore, the auto industry is a global industry, says Qi, who regularly interacts with colleagues in China and India. And “it is easy for physicists to engage in global environments.”