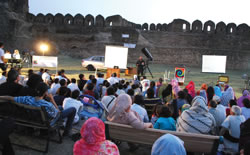 A crowd gathers to experience astronomy firsthand at the historic Rohtas Fort.

The year 2009 was the International Year of Astronomy (IYA) and hundreds of organizations worldwide celebrated mankind’s understanding and unraveling of the universe. In Pakistan, these objectives were actively pursued by the Khwarizmi Science Society (KSS). The astrofests, or falakyati melas in Urdu, are the Society’s latest initiative in popularizing science and bringing modern scientific knowledge to the remote and far flung areas of the country.

The KSS is one of Pakistan’s most active grass-roots science associations, aimed at furthering a science culture in our educational institutions. Since 1997, the Society has maintained an impressive series of seminars, workshops, field visits, conferences, student orientations and panel discussions, all aimed at university and research students. APS members will be glad to know that physics has remained one of the most popular focus areas.

However, in our academia, there is also the strong appreciation that of all the Pakistani students entering university, it is extremely hard to find those who are adequately prepared and excited enough to undertake the rigors of advanced physics. Without doubt, a massive overhaul is required to transform the way science and physics is taught at the primary and secondary levels. One of the reasons is that the current approach is largely textbook-oriented with little emphasis on real scientific activity, if any at all.

Feeling the need for contributing to scientific outreach and science popularization at the level of the schools and the laity, the KSS decided to take part in the IYA. The idea was to make a roving observatory and use astronomy as a vehicle for promoting science education in distant and rural schools and showing students, and importantly, their teachers, that science can after all be made interesting and inspiring!

In our astronomy initiative, we chose to connect science with tradition and technology with socialization. In our incarnation of astrofests, the word mela, literally meaning a ‘carnival’ or a ‘festival,’ is a centuries’ old tradition in the Indo-Pak subcontinent, where people of all ages flock and engage in festivities: sports, shopping, acrobatics, circuses, merry-go-rounds and emphatic recitations of folk songs and epics. These melas have stood the test of time and form long-awaited occasions of community gatherings. We believe that these concepts steeped in tradition and history can be used as a potent vehicle for the transmission of science.

For example, the live astronomical observation of the moon, Jupiter, Saturn and Venus triggered the biggest gathering in the District Public School and College, Okara in the Punjab province. More than two thousand men, women and children gathered in the evening at the school, that had been transformed into a festive carnival by the school authorities, first to listen to a popular lecture on the subject and then to observe the heavenly bodies, all in real time. The idea we use is very simple: connecting the scope’s eyepiece to a high-resolution CCD camera and projecting the live view onto multimedia screens.

Let me share a few interesting experiences. While the astronomers aligned their telescopic gear, the witty headmaster of Okara’s Public School, Mazhar Hussain, arranged an impromptu competition on poetic recitation relevant to the moon. In Urdu literature, the moon has remained a popular poetic icon and is used as a simile for the beloved. (However, viewing the lunar craters proved to be a complete surprise against the established literary notions!) The older generations were delighted as they were shown the various stellar constellations identified with their horoscopes. Finally, the magnificent rings of Saturn grabbed everyone’s attention.

Similar melas have also been arranged in Lahore’s Punjab University and at a large school in Phoolnagar, 70 km from the provincial capital. These events have attracted schoolchildren in the thousands and clearly, these are the country’s biggest star parties.

Through the KSS outreach, I have concluded that the best way forward of bringing science, astronomy, and physics to the masses is making connections with the cultural and social contexts. For example, our wonderful resident astronomer, Umair Asim, freely uses the local vernacular in his demonstrations; the poetic recitations that have now become a common theme in the intermissions are also a great resource for attracting the masses who in most cases have refined tastes for poetry and music. We are now also aiming at producing small readable pamphlets for children and their parents. Furthermore, in remote areas where Internet and emails are almost non-existent, we use the local mosque loudspeaker for announcing the festivals.

I must mention that it is a real delight seeing parents, teachers, children, housewives and toddlers, all sitting together, with their jaws dropped, reveling in the magnificent views of lunar shadows, craters named after Arab scientists, the mythical Pleiades, the tilt of the Saturn rings and Jupiter’s awe-inspiring moons. One does not find many opportunities where school fields are used as grounds for gathering families, teachers and children. Reputable schools send out invitations to nearby schools, so the melas also become a meeting point for the local educational administration.

Clearly, our spectators have never looked through a telescope before. I believe that these well-deserved moments of bliss can have a lasting impact, burning indelible impressions into their memories. This way, schoolchildren can be attracted to taking up careers in science, astronomy and physics, filling up the void of enthused and motivated physics students at the university level. I have seen many school children asking our team questions about careers in SUPARCO, Pakistan’s space agency as well as the NASA.

The most recent thrust of the Society’s melas is amalgamating science with history and architecture. Being a largely emotional and traditionalist society, Pakistanis show a deep sense of bonding with their past. In this spirit, the KSS decided to extend the outreach to architectural monuments, a program also resonating with the joint UNESCO and International Astronomical Union project on World Heritage.

On the 30th of May, there was a large gathering of local residents and tourists on the plateaus of the marvelous Rohtas Fort in District Jhelum. The fort, completed in 1547, is a blend of Indo-Afghan architecture and a declared World Heritage Site. One of the gates inside the Fort is the Suhail Gate, named after the star with the same Arabic name, (called Lambda Velorum in modern catalogues). Interestingly, there is a saintly derwish with the name Suhail Bukhari who is now buried at the gate, resonating with our nation’s continuous blending of science with tradition.

The unhindered mixing of science and tradition could also be witnessed in news reports airing after the solar eclipse viewable from Pakistan on July 23. The event highlighted the many superstitions associated with the natural phenomenon such as protecting pregnant women from its evil influence or its propitious power in healing the disabled. However, the solar eclipse not only exposed the challenges but also presented for the first time a rare opportunity to educate the Pakistani society about science. I hope we can make full use of these opportunities.

These melas go hand in hand with the series of public lectures on astronomy we are organizing throughout the year. So far, the KSS has organized Dr. Pervez Hoodbhoys’s lecture on multiple dimensions and Dr. Jameel-un-Nabi’s exposition on stellar life cycles. These lectures are being followed by practical workshops on telescope making and backyard astronomy.

In the coming months, the Khwarizmi Science Society plans to continue its scientific festivities and the falakyati melas with greater vigor and keep on inciting the minds and hearts of future astronomers and physicists. You are welcome to help us in our efforts!

Pictures and Videos of Astronomy-Related Events

Dr. Saadat Anwar Siddiqi, President of the KSS, is a Professor at the Centre for Solid State Physics, Punjab University, Lahore. Contact him if you want to get involved in the Society’s activities of popularizing science and physics among youngsters.