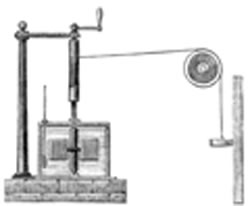 Calorimeter used by Joule in his 1876 determination of the mechanical equivalent of heat.

Scientists in the early 19th century adhered to caloric theory, first proposed by Antoine Lavoisier in 1783 and further bolstered by the work of Sadi Carnot in 1824. The work of a brewer and amateur scientist on the nature of heat and its relationship to mechanical work would give rise to the first law of thermodynamics.

Born in 1818, James Prescott Joule came from a long line of brewers, so chemistry was in his blood –as was scientific experimentation. Described as “delicate” in contemporary accounts, he and his brother experimented with electricity by giving each other electric shocks, as well as experimenting on the servants. The two boys were tutored at home until 1834, when their father sent them to study under John Dalton, one of the leading chemists of that time, at the Manchester Literary and Philosophical Society. Two years later, Dalton suffered a stroke and was forced to retire from teaching. The Joule brothers’ education was entrusted to John Davies.

Eventually Joule took over as manager of the family brewery, but science remained an active hobby. Fascinated by the emerging field of thermodynamics, Joule jerry-rigged his own equipment at home–using salvaged materials–to conduct scientific experiments–initially to test the feasibility of replacing the brewery’s steam engines with the newfangled electric motor that had just been invented. He found that burning a pound of coal in a steam engine produced five times as much work (then known as “duty”) as a pound of zinc consumed in an early electric battery. His brewery was better off with the steam engines. His standard of “economical duty” was the ability to raise one pound by one foot (the “foot-pound”).

His first experiments focused on electromagnetism and he quickly showed a gift for experimental apparatus; he built his first electromagnetic engine at 19, as well as improved galvanometers for measuring electrical current. Thanks to Dalton’s influence, Joule was a rare subscriber to atomic theory, and sought to explain electricity and magnetism in terms of atoms wrapped by a “calorific ether in a state of vibration.”

This did not match his experimental results, however, and in December 1840, Joule published a short abstract in the Proceedings of the Royal Society suggesting that the heat generated in a wire conveying an electrical current results from the heat generated by the chemical reactions in a voltaic cell. In other words, heat is generated, not merely transferred from some other source in an electromagnetic engine. Based on this work, he formulated “Joule’s Law,” which states that the heat produced in a wire by an electric current is proportional to the product of the resistance of the wire and the square of the current.

When Joule presented these findings in a paper read before the British Association meeting in Cambridge, he concluded, “[T]he mechanical power exerted in turning a magneto-electric machine is converted into the heat evolved by the passage of the currents of induction through its coils; and, on the other hand, that the motive power of the electro-magnetic engine is obtained at the expense of the heat due to the chemical reactions of the battery by which it is worked.”

In subsequent papers presented in 1841 and 1842, he quantified this heating effect, demonstrating that the total amount of heat produced in a circuit during “voltaic action” was proportional to the chemical reactions taking place inside the voltaic pile. By January 1843, he had concluded that his magneto-electric machine enabled him to convert mechanical power into heat. All of this led Joule to ultimately reject the caloric theory of heat. He also established that the various forms of energy are basically the same and can be changed from one into another, a discovery that formed the basis of the law of conservation of energy, the first law of thermodynamics.

In his most famous experiment. Joule attached some weights to strings and pulleys and connected them to a paddle wheel inside an insulated container of water. Then he raised the weights to an appropriate height and slowly dropped them. As they fell, the paddle wheel began to turn, stirring up the water. This friction generated heat, and the temperature of the water began to increase.

It was the very precision of his measurements that caused some scientists to balk at accepting Joule’s findings. He claimed to be able to measure temperatures to within 1/200 of a degree Fahrenheit, which would have been astonishing to a 19th century scientist. Some historians have speculated that Joule’s experience in the art of brewing may have given him skills with experimental apparatus that his colleagues lacked. He also worked with John Benjamin Dancer, England’s finest instrument maker, to build highly accurate thermometers. Among those inclined to accept Joule’s work were Michael Faraday and William Thomson (Lord Kelvin), although they remained skeptical.

Thomson and Joule eventually became good friends and scientific collaborators. Thomson recalled in his memoir meeting Joule and his new wife, Amelia, during a tour of Mont Blanc in 1847. Joule was carrying a thermometer and claimed he would attempt to measure the thermal effects of fluid motion in local waterfalls. Thomson joined him a few days later at the Cascade de Sallanches, but they “found it much too broken into spray” to make a useful measurement. For several years, Joule conducted experiments and sent his results in letters to Thomson, who analyzed them from a theoretical standpoint and suggested further experiments Joule might try. Among the fruits of this partnership was the Joule-Thomson effect, in which an expanding gas, under certain conditions, is cooled by the expansion.

Joule lost his wife and daughter in 1854, and lived a fairly secluded life from then on. He died on October 11, 1889, and his gravestone is inscribed with the number 772.55–his most accurate 1878 measurement of the mechanical equivalent of heat. His work did not go unrecognized: the Queen of England granted him a pension in 1878 in recognition of his scientific achievements. The value of the mechanical equivalent of heat is represented by the letter J in his honor, and the standard unit of work is the joule.