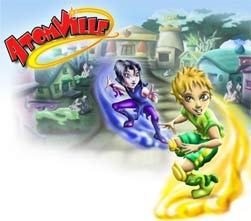 Niles and Livvie in Atomville.

There are many books written to introduce science concepts to children, but Jill Linz and Cindy Schwarz’s new offering has taken a different approach from most others.

“[It’s] the adventures of Niles and Livvie, who just happen to be atoms,” said Linz, “It’s the story of how they accidently invent something called ‘the macroscope’ and discover the outside world for the first time.”

Nearly all of the characters in Adventures in Atomville: The Macroscope are atoms. Niles (a nitrogen) and Livvie (an oxygen) free Penelope the Wise Old Proton from the captivity of the Royal Benzenes and return her to Lord Neon’s Castle. The two sides are in the midst of a dispute as to whether the citizens of Atomville should work for the molecules, or live freely in a gaseous state. The book reads as a young adult chapter book aimed at grades three through five.

“In other kids’ books it’s more of an overt science lesson,” Linz said, “In Atomville, that’s not the objective. The objective is a story plain and simple.”

Both Linz and Schwarz are physics professors and have done a great deal of work with outreach. The two met two years ago through a mutual colleague in APS’s New York section. Linz first asked Schwarz to join her advisory board for an NSF grant she was applying for. She hoped to create an animated series based on the Atomville characters she had been using for years in lectures.  Schwarz asked to come on board as a full partner.

The NSF ultimately passed on the funding, and Linz and Schwarz opted instead to write and publish the story themselves. The two spent much time together at the 2008 New York State meeting in Cornell fleshing out and writing the story. Their plan is to expand Adventures in Atomville into an ongoing series. Schwarz said that they already have most of the next two in the series planned out.

Schwarz received her PhD at Yale in experimental particle physics, and began her career by teaching the subject at Vassar. When in the early nineties the Superconducting Supercollider project was canceled, she shifted her focus from research to outreach. In 1992 she authored her first book, A Tour of the Subatomic Zoo, and edited its follow-up Tales from the Subatomic Zoo, a collection of short stories by Vassar students starring subatomic particles.

Linz received her master’s degree in theoretical physics at RPI, and now teaches physics full-time at Skidmore College. Her classes are aimed at teaching non-physics majors practical fundamentals of physics they can use in their fields. Her course “Sound and Music” is primarily aimed at musicians, while her other course “Light and Color” appeals mostly to art students. In 2000 she started the Physics Outreach project, where she collaborated with the NYU film school to create two “Falling Bodies” videos to introduce basic physics concepts to elementary school students.