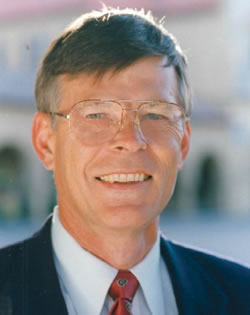 Byer earned his PhD in Applied Physics from Stanford in 1969. Since then he has been a faculty member at Stanford, conducting research and teaching classes in lasers and nonlinear optics. He has made numerous contributions to laser science and technology, including the demonstration of the first tunable visible parametric oscillator, the development of the Q-switched unstable resonator Nd:YAG laser, remote sensing using tunable infrared sources, and precision spectroscopy using Coherent Anti Stokes Raman Scattering (CARS). His current research includes developing nonlinear optical materials and laser diode pumped solid state laser sources for laser particle acceleration and gravitational wave detection for projects such as the Laser Interferometer Gravitational-Wave Observatory and the Laser Interferometer Space Antenna. 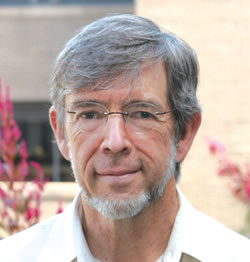 Currently the co-director of the Stanford Photonics Research Center, Byer has directed several centers and laboratories at Stanford, most recently the Hansen Experimental Physics Laboratory and the Edward L. Gintzon Laboratory, and has served as vice provost and dean of research, associate dean of the School of Humanities and Sciences, and chair of the physics department. Outside of Stanford, he has played a wide variety of leadership roles. He has served on the American Institute of Physics Governing Board, has been President of the Optical Society of America and of the Laser and Electro-optics Society of the IEEE, and has been chair of the California Council on Science and Technology. He has served on numerous advisory and review committees over the years, completing a four year term on the Air Force Scientific Advisory Board in 2006, and currently advises the SLAC Linac Coherent Light Source, the National Ignition Facility at LLNL, and the Canadian Institute of Photonics. Since 1995 he has been an active part of the National Research Council; in 2007 he worked on a directed energy study for the NRC Board on Army Science and Technology. He served on the NRC Committee on Optical Sciences and Engineering, the NRC Committee on Inertial Confinement Fusion, and the NIST NRC advisory board as vice chair of the physics panel.

Byer has published more than 500 scientific papers and holds 50 patents in the fields of lasers and nonlinear optics. He was elected to the National Academy of Engineering in 1987 and to the National Academy of Sciences in 2000. He has been honored with numerous awards; in 2009 alone he received the W. E. Lamb medal for Laser Science and Quantum Optics, the Frederic Ives Medal/Quinn Endowment from the Optical Society of America, and the IEEE Photonics Award.

“Physics and the understanding of the world through physics is an exciting and worthwhile career, and I think one of the main things the American Physical Society can do is help carry that excitement to the next generation of young men and women interested in science and the application of science,” Byer said. “Beyond that we have an obligation to speak out as physicists on those technical and technological issues that are important to us today. That includes communication across the globe, openness in the [basic] research programs…that support all of us and the next generation, and the understanding of how best to generate and utilize energy, and the outcomes of new forms of energy and how we can benefit mankind by developing those new forms of energy.” 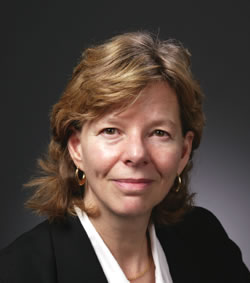 
In his candidate’s statement, Byer said it was crucial to balance the nation’s “investments in health and medicine with investments in the physical sciences and engineering.” Part of that investment involves modifying immigration policies to continue attracting the best and brightest foreign scientists, and changing export controls to keep America engaged in international collaborations. He said he sees APS taking a leading role, not only in pushing for these policy changes, but in “[engaging] the next generation in the intellectual excitement and benefits of a career in science.”

Byer added that transitioning to renewable, non-polluting energy sources will foster economic growth, especially if physicists can guide this change. “A ‘man to the moon’-scale international research and development program that includes energy technologies from clean coal to fusion and fusion-fission hybrid energy is an essential investment in the future,” he said in his candidate’s statement. “We must learn to manage both the environmental impacts and to create a safe, non-threatening fuel cycle.”

Steve Girvin is a theoretical physicist who works closely with experimentalists to pursue questions in condensed matter, quantum optics, and cold atom physics. He received his PhD from Princeton in 1977 and is currently the Eugene Higgins Professor of Physics and Professor of Applied Physics at Yale, where he also serves as Deputy Provost for Science and Technology. He has served on and chaired various advisory boards, including the APS Divison of Condensed Matter Physics, the Kavli Institute of Theoretical Physics in Santa Barbara, and the National Research Council Committee that wrote the 1999 decadal report on condensed matter and materials physics, among others. 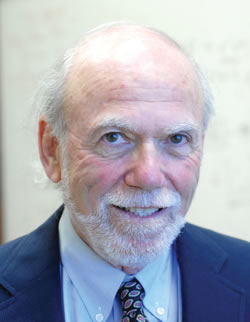 “We face an era of fiscal uncertainty with risks to the world economy as well as to our educational and research institutions,” Girvin said in his candidate’s statement. “The world faces additional risks in a rapidly changing environment increasingly dominated by poorly understood technologies.” In the face of these risks, the nominating committee needs to find leaders who will make APS instrumental in “providing solid evidence-based information to our policy makers and the general public,” he said. Restructuring the undergraduate physics curriculum, he added, could help diffuse the valuable problem-solving skills learned in physics to students of biology, medicine, and engineering.

Marta Dark’s research focuses on laser interactions with biomaterials, including the study of electro-optical effects on nematic liquid crystals, and the photoacoustic and photothermal effects in soft fibrocartilage tissues. She earned her PhD in Physics from MIT in 1999 and spent a year as a postdoctoral associate at the Center for Bio-Molecular Science and Engineering at the Naval Research Laboratory. In 2000, she joined the physics department at Spelman College, where she works to include modeling of real phenomena in the physics curriculum.

Dark has served on local and national committees, ranging from the Chemical and Biological Physics section of the National Society of Black Physicists, to New York University’s “Physics in the Science Curriculum” Network summer seminar. She is currently completing her term on the APS Committee on Minorities and has served on the American Association of Physics Teachers Committee on Minorities.

In her candidate’s statement, Dark called herself a “translator of physics to the general public.” She identified three major challenges for the physics community: encouraging young people, especially women and members of underrepresented minorities, to study physics and pursue it as a career; improving Americans’ quantitative literacy; and showing policy makers and the public how physics can be applied to “solve the pressing problems of our day.”

Warren Mori has been a faculty member at UCLA since earning his PhD there in 1987, achieving full professorship in both electrical engineering and physics and astronomy in 1998. Since the fall of 2006 he has been the director of the UCLA Institute for Digital Research and Education. Mori’s current research interests are in plasma physics, laser and beam plasma interactions, plasma-based accelerators and light sources, inertial confinement fusion, high energy density science, relativistic shocks, and high performance computing.

In his candidate’s statement, Mori emphasized the need to attract talented students to physics and to convince the government of the “value and need for funding in basic research in physics.”

“This is also an auspicious time where our society faces grand challenges such as climate change and energy shortfalls,” he said. “It is more important than ever that the APS be visible and vocal in driving science policy.”

Belita Koiller earned her PhD at UC Berkeley in 1975 and is currently a professor at the Physics Institute at Universidade Federal do Rio de Janeiro. As a condensed matter theorist, Koiller has contributed to the understanding of the properties of disordered solids, particularly disordered chains and semiconductor alloys. More recently, she has been interested in quantum control of individual electrons’ spin and charge in semiconductors, aiming at applications in quantum information and quantum computing.

Koiller received a Guggenheim Fellowship in 1982, and in 1995 became the first woman to be elected a full member of the Brazilian Academy of Sciences in the Physical Sciences division. In 2002 she was distinguished as a Commander of the National Order of Scientific Merit by the presidency of Brazil, and was the L’Oréal UNESCO Laureate for Women in Physical Sciences in Latin America in 2005.

Koiller was elected to three four-year terms as general councilor of the Brazilian Physical Society and served for three years on the ICSU Committee on Capacity Building in Science. In 2008 she became a member of the IUPAP commission on semiconductors, chairing the IUPAP-sponsored 29th International Conference on the Physics of Semiconductors, held in Rio de Janeiro in 2008. She has been a member of the Executive Committee of the International Human Rights Network of Academics and Scholarly Societies since 2005.

In her candidate’s statement, Koiller highlighted the importance of helping international scientists gain entry to the US in order to work with American researchers. She said she will bring her experience with the aforementioned committees and societies to her new role, in which she looks forward to facilitating international collaborations.