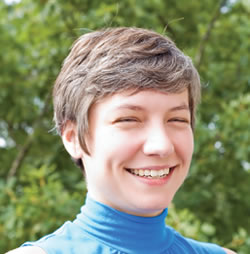 Fresh from completing her PhD in nuclear physics at Indiana University, Crystal Bailey assumed the position of Education and Careers Program Manager at APS in early July.

She will be leading a number of efforts to promote and market physics education. She is helping to create a new website that will provide information on physics careers to undergraduate, high school, and middle school students, as well as to their parents and teachers. “We want to highlight the ‘hidden physicists’—all those people with a physics background whose job title doesn’t include the word ‘physicist,’” says Bailey. Most people with bachelor’s degrees in physics do not work as research physicists in academic or industrial settings.

In addition, Bailey is working on a multimedia presentation designed to be shown in venues frequented by potential physics majors, such as university science buildings. “We’re trying to make these shows highly informative and visually striking, so they will excite undergraduates about careers and opportunities in physics,” says Bailey.

“Crystal will be a great addition to our team as we expand our efforts to double the number of physics majors and recruit more women and underrepresented minorities into physics,” says Ted Hodapp, Director of Education and Diversity for APS. “Lack of information about physics careers is a major barrier to increasing undergraduate enrollments.”

“I am looking forward to helping get the word out about the many uses of a physics education,” says Bailey. “I am especially excited about reaching out to those students who have never given physics a thought, and here at APS I’m in a great position to do that.”