This year APS has announced three women as recipients of the M. Hildred Blewett scholarship. Chosen by the Committee on the Status of Women in Physics, the three are Janice Guikema at Johns Hopkins University, Marija Nikolic-Jaric at the University of Manitoba, and Klejda Bega at Columbia University.

Each year the committee selects women who are returning to their research careers that had been interrupted for family or other reasons. The scholarship is a one-year grant of up to $45,000 that can be used towards a wide range of necessities, including equipment procurement, salary, travel, tuition, and dependent care. This is the fifth year the scholarship has been awarded. 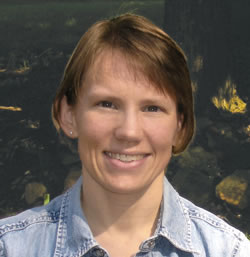 After taking time off to follow her husband and start a family, Janice Wynn Guikema is continuing her return to the laboratory as a second-time recipient of the Blewett Scholarship. She currently has a part-time research position at Johns Hopkins University, where she is primarily studying graphene.

Graphene molecules are one-atom-thick sheets of carbon atoms organized in a hexagonal pattern like a honeycomb. Since its first synthesis in 2004, it has quickly become one of the hottest fields in condensed matter physics because of its remarkable structural and electrical properties.

“It was amazing how many sessions there were on graphene at the March Meeting,” Guikema said.

She plans to use funds from the Blewett Scholarship to further research the feasibility of using graphene as a sensitive magnetic detector. She said that graphene has a lot of potential for use as a Hall effect detector to detect nanoscale particles and map out magnetic structures. Currently she is continuing to look for ways to make the material as sensitive as possible. In addition she will use scanning probe microscopy to further explore the nature of graphene.

Guikema first left her postdoctoral research at Cornell University in 2005 when her husband received an offer to join the faculty at Texas A&M and they relocated to Texas. There she took a lecturing position teaching introductory physics classes while pregnant with her first son.

“I really like teaching and would like to see it in my future some time from now,” Guikema said.

Her son David was born in the summer of 2006 after she concluded her first semester. Guikema returned to the university that fall, balancing teaching part-time with “finding time to learn how to be a mom.”

In January of 2008, the family pulled up stakes again and moved to Maryland after her husband was offered a position at Johns Hopkins University. She saw this as a good opportunity to return to research. Though Guikema enjoyed teaching, she missed the hands-on aspect of running her own experiments.

“I wanted to get back to learning something new,” Guikema said, “my interest was more in finding out new things about the world.”

The scholarship will allow her to further her experiments on graphene and continue working with an undergraduate research assistant. She also said that the Scholarship will give her time to line up funding through regular channels. Additionally, switching from teaching to research has given her more flexibility to care for her newest son Matthew, born in June.

“The continued funding will help me more firmly establish my research career and maintain momentum after having the [second] baby,” Guikema said “It’s really encouraging…to have the committee decide what you’re doing is worthwhile.” 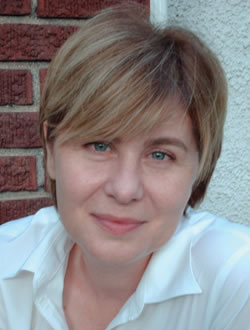 Though family tragedy postponed Marija Nikolic-Jaric’s PhD, she never doubted she would ultimately complete it and return to the lab.

She is currently doing her post-doctoral research on biomicrofluidics at the University of Manitoba, Canada. She is investigating the properties of shear-induced rotation on aspherical particles in non-uniform electric fields. Studying these properties will allow researchers to better identify a particle’s structure based on its behavior in these electric fields.

“From these rotating particles, we will be able to deduce more about the particle’s electrical signals,” Jaric said, “It will allow us to know what the limitations are on performing measurements on spherical particles.”

She hopes to use these methods to help identify a living cell’s characteristics in order to improve medical diagnostic and therapeutic technologies. With more work these methods could be used in medical instruments to detect defects in living cells remotely. Identifying the electronic signatures of diseased cells would mean that doctors could analyze large numbers of cells at a time without needing microscopes.

“We work on making these detectors very sensitive and do these detections via electronic means,” Jaric said, “If you can do the whole thing electronically you can miniaturize it and put it on a chip”

In August of 1996, everything had to be put on hold. Just weeks before Jaric was due to defend her thesis, her husband was diagnosed with a rare brain tumor. Jaric already had a lot on her plate; trying to pull together her credits from multiple universities while at the same time caring for her four-month-old son. Her husband’s illness was just too much, and completing her degree would have to be put off for a while. After his death the following year, she moved back to Canada to be closer to her parents.

During her time away from the lab she volunteered at her son’s elementary school, helping to teach math to the students through games. Though the work at the school was rewarding, she knew she wanted to return to conducting research.

“The challenge of research was definitely missing there,” Jaric said, “I knew I had to just go back to what I loved to do the most.”

Her step-father’s death in 2007 put off her defense an additional semester. But in January of 2008 Jaric was finally able to defend her thesis at Simon Fraser University in Vancouver, finishing the PhD she started years before. She said the Blewett scholarship has given her a solid financial and psychological boost, and she is now awaiting publication of her first paper.

“It’s just amazing,” Jaric said, “This hand extended to me is just wonderful.” 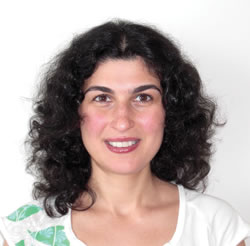 Klejda Bega is excited to return to research after four years working as a management consultant.

Now back in the lab, she plans to develop new approaches for creating ultracold diatomic molecules in optical lattice traps at microKelvin temperatures. Once they are cooled, she will conduct precise measurements of these molecules, including determining their resonance frequencies. Her first order of business will be to construct and operate the laser systems, which will be used for creating, cooling and probing the molecules.

One possible application of her work will be in the creation of a molecular clock. Today’s atomic clocks operate by measuring the fundamental resonance frequency of an atom, most commonly cesium or rubidium. Molecular clocks operate by measuring resonance molecular vibrational frequencies, and Bega hopes to accurately measure these vibrations. In addition to improving the standard for super-accurate clocks, Bega said that results from her experiment will be used to further define fundamental physical constants.

“These molecular vibrations are very sensitive to the variation of the proton/electron mass ratio,” Bega said, “and will provide the only model-independent measurement of these variations to date.”

It had always been Bega’s dream to study physics after she first read the biography of Marie Curie when she was nine. She first came to the United States after the old communist regime in her native Albania collapsed, making studying in the West possible. She earned both her BS and PhD at Caltech, and did her graduate work at SLAC.

Unfortunately Bega soon had to put her research ambitions on hold. In order to support aging family members still living in Albania and cover their medical expenses, she worked as a management consultant. There, Bega found that her scientific background helped in her new consulting job.

“My physics education came in very handy,” Bega said, “One could use the same analytical skills to first define and then solve a complicated business problem, and just like in physics, of course nothing is straightforward.”

She said also that this time away from research helped her realize she was eager to return to it.
“It made me realize how much I actually like physics.”

Last year, Bega married and moved to New York and joined Prof. Tanya Zelevinsky’s lab at Columbia University. With the help of the Blewett Scholarship, Bega hopes to complete her postdoctoral work and obtain a permanent research position.

Bega is also expecting a baby in September. She joked that with the scholarship, “even if it crossed my mind, there is no way I am taking another break now.”

M. Hildred Blewett was a particle physicist who left much of her estate to APS when she died in 2004, at age 93. She wanted to establish a scholarship to help women in physics overcome the obstacles they often face in the field. Blewett started her career in Schenectady, New York in the 1940s working for General Electric, where she developed a method to control the pollution emitted by smokestacks. In 1947, she and her husband John were among the original team members at Brookhaven National Laboratory. Later she worked at Argonne National Labs and finally CERN until her retirement in 1977.